As the Story Continues...

When I last posted an excerpt, it was the opening page or so of Chapter One of Darnahsian Pirates.  While I usually post just one time from each chapter, I thought I should post a second from this one.  Again, it's Chapter One, "Charting a New Course," from the third of the Stone Island Sea Stories.  It might be interesting to some because it involves Pierce meeting a real life and fairly famous historical character. 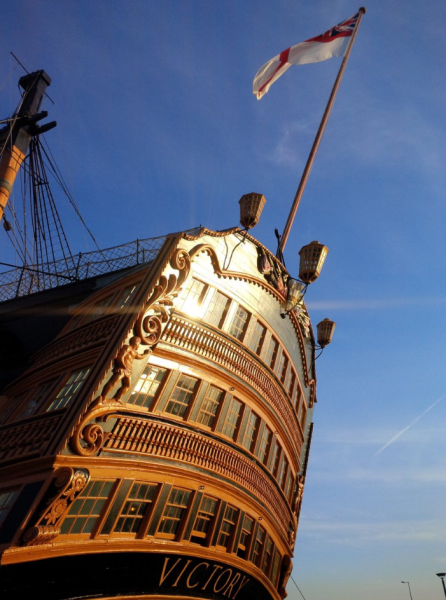 Stern windows of HMS Victory, Lord Nelson's flagship at Trafalgar, now drydocked in Portsmouth.  I found this pic on Twitter and have no means of identifying of crediting the photographer.
When he came ashore earlier, he hadn’t known when he would be returning and had dismissed his gig’s crew, planning either to signal for them, or to hire a shore boat.  At the hard, he noticed a barge and crew, waiting to return a captain to his ship.  Perhaps he should have asked his gig’s crew wait or return at a specific time for him.  Yet there were boats for hire he could use, although at this instant, none seemed available.  No matter, he would wait.  While the December air was cool, it was not raining, and the moderate wind did not cut through to his skin.
Pierce stood idly, lost in his thoughts.  His introspection dissolved when a voice behind him said:  “Commander, might I offer you transport to your ship?”
“I would not wish to trouble you, sir.”
“It would trouble me more to see you remain in the cold.  Has your boat’s crew defaulted?”
“Indeed not, Captain.  I had no idea of my time ashore, and wished they not spend it waiting for me.”
“Commendable, Commander to consider your men.  Now, if you’ll join me, sir, we’ll have you aboard shortly.”
“I do thank you, Captain?”
“Thomas Hardy, HMS Victory.  And you sir, are?”
“Edward Pierce, His Majesty’s Schooner Island Expedition.  And might I express my condolences regarding your loss,” said Pierce respectfully.
Once they were seated in the stern sheets and the barge began its journey toward the anchored ships, Hardy continued the conversation.  “Island Expedition, sir?  The large jack-ass brig we passed upon entering the roadstead today?”
“She might be identified as such, but we have always thought of her as a schooner.  Truth be told, sir, perhaps she is a little of both.”
“But I’m sure she answers nicely to all tasks put before her.”
“Indeed, sir.”
“Before I am remiss, I thank you for your expression of sympathy.  The salute rendered by your hands was noted and appreciated as well.”
“You’re welcome, sir.  Many served under Lord Nelson in the past.”
“And you, Commander Pierce?”
“I was in Orion at the Nile, sir.  Two older brothers were hands aboard Captain at Cape St. Vincent.”
“I see,” said Hardy.  “Then as for us, it is a personal loss.”
“Quite so, sir.  Even those aboard who never served with him feel it.”
“But I hear you have had some adventures of your own.”
“Possibly, sir?”
“I’ve been with the port admiral all evening.  Curiosity compelled me to ask about the unusually rigged, large schooner, and he complied by detailing what he could of your voyage.  Honestly, sir, I would react the same as he is wont to, had there not been instructions from higher levels regarding your situation.”
“Believe me, sir, had I not experienced it, I would also regard such reports and substantiations in the same manner.”
“Aye, the possibility of other worlds and nations not unlike those we know here, stretch one’s credibility to the breaking point.  Yet in conversation these past few moments, I do not detect any insincerity or deceit.”
“Most kind, sir.”
“I may not believe all aspects of your tale, or, shall I say, the parts I’m aware of, those in higher places who support you must have reasons for doing so.”
“I am most grateful for their support and belief.  I’m sure that whatever comes my way will be for the good of King and Country.”
“Spoken as a loyal and dutiful, subject, sir.  Now, do we approach with ceremony or not, Commander?”
The barge with its large crew of oarsmen and the tide in its favor was already nearing Island Expedition.  “Port side, if you please, sir.”   At this hour he did not want to disturb the side boys and bo’sun’s mates to provide the proper ceremonies upon returning.  If he had command of a larger ship, a frigate or ship-of-the-line, perhaps he would make use of a private gallery ladder to come aboard unannounced.  Instead, he used the port rather than the starboard boarding ladder to indicate his return would be quiet.
Tags: #amwriting, #indieauthor, #writingcommunity, story excerpts
Subscribe