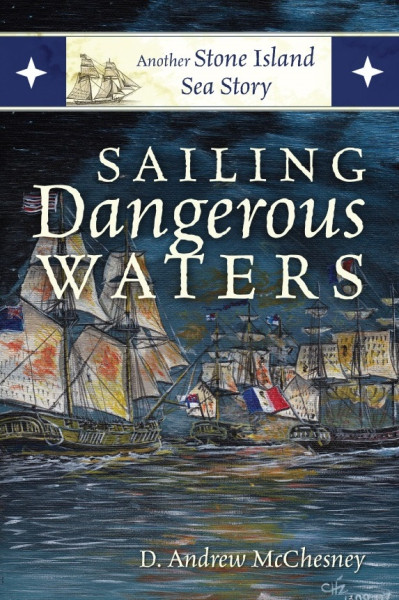 Another look at the cover for the second of the Stone Island Sea Stories.
of Sailing Dangerous Waters: Another Stone Island Sea Story, that is.  As it is, this excerpt is from near the beginning of the chapter, so hopefully I do not give away any details as to how the story ends.

As Pierce sat in his cabin that stormy December night, he felt like an old worn out gun, charged with too much powder and trying desperately not to burst from the force of the explosion.  He was drinking rum, straight and not watered into grog, rather than his usual coffee, which told of the strain he felt.
While the trip to London had been enlightening and had brought relief in the knowledge that he would not be court martialed, Pierce grew tired of the continuous waiting.  The port admiral had no duties for him.  Letters and reports to the British Island Expedition Organization or to those whom he thought were the Organization yielded no response.  Immediately upon arrival he had seen his long continuing letter to Evangeline posted.  He had had no reply, either to that large packet or to the shorter missives he’d sent since.
Having not yet heard from Evangeline tore at him like a hurricane force wind shredding worn and ragged topsails.  Had she completely forgotten him over the three years of the voyage?  Could he have somehow so angered her that she refused to even acknowledge his presence in England?  Had she been so in love with this Lieutenant Carlisle, and was she devoted so completely to his memory that she could not accommodate even a short letter to him?
He heard voices on deck, the clatter of feet on the companionway, and then a knock at the door. “Yes?” he said, struggling to sound civil and relaxed, when his temper desired he answer with angry tones and vile words.
“A letter for you sir, brought out by shore boat.”
“A letter?  Come in, Mr. Dial.”
“Aye, sir,” said Dial as he stepped into the cabin.  “Here, sir.  And the boatmen said they were promised sixpence each should they reach us, sir.”
Surely whoever hired them meant that they should collect that payment when back on the hard.  Obviously the boatmen were trying to collect a double fee for their service, being paid both by those on shore and those aboard the schooner.  He was about to have Dial to tell them to shove off and collect their sixpence each from shore, but he glanced at the letter, recognized the handwriting, and softened.  With the weather as it was, he knew they had struggled to bring the letter out to him.
“Two of them?” he asked, pawing through the loose coins in the top desk drawer.
“Aye, sir.”
“Well, then, Mr. Dial, they shall need to share this, as I do not have the proper coinage to give them each.”  He handed a shilling to Dial.  Then he softened a bit more.  “No, Mr. Dial, we’ll reward them double.  A shilling to each.”  He handed Dial an additional coin. “You may offer them coffee, if that will warm them.”
“Aye aye, sir.”  Dial left to pay the boatmen, see them off, and resume his duties.
For some time Pierce sat at his table, the letter before him.  He wanted to tear it open and to read the words she had written.  Yet he was very much afraid of what truth might be revealed once it was unsealed and the words, written with her own hand, were revealed.  Absently he reached for his glass.  The pungent odor of rum tickled his nose, and as the rim reached his lips, he thought otherwise and set it down.
He pushed the glass, half full of rum to the back edge of the table.  Then he dug out his one remaining mug and departed the cabin.  He hoped that there was coffee, hot and fresh on the galley stove.  He suddenly and desperately wanted a cup of the hot restorative beverage.  As he made his way forward, he reminded himself to not vent his anger, frustration, or disappointment on the cook should no coffee be ready.
Back in the cabin, Pierce took a long sip from the cup of coffee.  It was hot and relatively fresh.  He broke the seal, unfolded the paper and read:
“Edward,
I have received your letters written during the voyage, and indeed a few written as you are anchored at Spithead.  I humbly apologize for not replying with more haste.
During your absence, things occurred that I did not plan for, and because of them, things between us are not as they were.  I do not want to leave things between us unresolved, so I have journeyed to Portsmouth and have obtained rooms at the George.  Please do not be so angry that you would refuse to call upon me for dinner tomorrow.
Evangeline.” 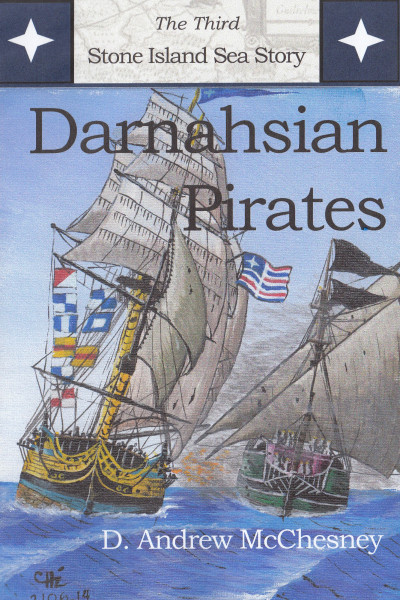 Here's the final cover for the third book...
In a few days, I'll resume with excerpts from chapters in Darnahsian Pirates: The Third Stone Island Sea Story.  As a side note, we've taken care of the discrepencies that existed in the cover and as far as I can see, it's ready to go.  In fact, I pushed the "publish" button earlier today.  It should be available as a paperback on Amazon is a couple or three days.