And So the Story Continues 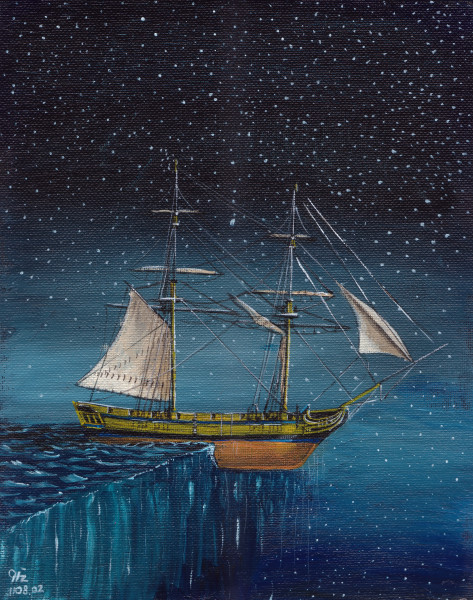 "Hotchkiss' Paradox" cover art for Beyond the Ocean's Edge

Again, I'm trying to get back to posting here on a regular basis.  I've realized it's been a while since I've put up any sort of excerpt from the Stone Island Sea Stories, so here are the opening lines from Chapter Twenty-Two, "Boarders Away!" from Sailing Dangerous Waters: Another Stone Island Sea Story.  That means four more chapters to go and then I can start posting excerpts from the soon to come, Darnahsian Pirates: the Third Stone Island Sea Story.
As far as that third book goes, I'm all set to upload it, having had the corrected print file and final version ofthe cover file returned by my editing, formatting, and cover designer partner.  Thanks Sue, for all the help and effort!  I appreciate it.
Dave
Chapter Twenty-Two
Boarders Away 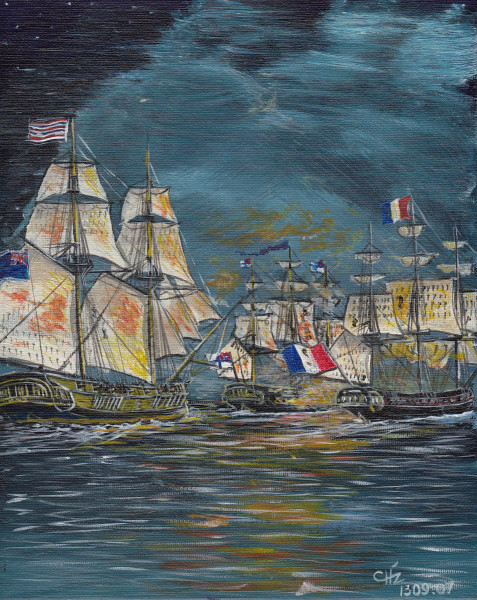 "Helm, Steer Between Them!" Cover art for Sailing Dangerous Waters
“Come on lads!  Reload!”  Pierce exhorted the starboard gun crews as they worked fiendishly to recharge their weapons.  Crewmen from the unused port battery helped.  “Aim for her mainmast!  Aim low, lads!”
“Fire as you bear!” ordered Hotchkiss.  The guns went off singularly or in twos and threes.  “Reload!  Continue firing!”  Now they would see if all the practice Pierce had insisted on would pay off.  Could they reload and fire faster than the French?  Could they take all the steps needed to ready the guns for another round, even with the enemy’s deadly muzzles only yards away?  Would Island Expedition be able to properly man her guns in the face of the Frenchman’s deadly fire?  Time, perhaps a very short time would tell.
The enemy’s next broadside crashed out.  Shot tore across the schooner’s deck.  Splinters flew!  Men screamed in agony!  Great gouges appeared in the deck planking.  Blood ran across the once clean holystoned deck and turned it a dull muddy brown, contrasting with its earlier snowy white appearance.
The efforts to reload and fire the starboard battery never ceased.  As soon as the last French gun had recoiled against its breechings, the first of Island Expedition’s starboard twelve-pounders was run out through its port.  When it was hard against the port sill, the gun captain checked the aim, waited for the roll, and pulled the lanyard.  The gun roared, bucked, and raced inboard, halted by its breeching rope.  By now, the other guns were loaded and run out.  They fired as the crew of the first gun began to reload again.
He noted with satisfaction tat that first gun was ready to fire once again before the first French guns showed through their ports.  Those deadly guns did not fire until the entire battery had been run out.  Two of the schooner’s starboard guns fired three times during the time it took the French to fire, reload, and fire a second time.  At this time the British had the advantage of larger weapons and a higher rate of fire.  Yet to sit alongside the enemy and pound it out was not what Pierce preferred.  He would rather maneuver smartly; dart in and out to damage the enemy while avoiding being damaged in return.
Large numbers of men gathered on the Frenchman’s deck.  The gap between the two vessels narrowed as the corvette swung, imperceptibly at first, to the north.  She planned to board.
“Let fly topsail sheets!  Mainsail, foresail sheets!  Shiver ’em, lads!”  Pierce roared.  “Get the way off o’ her!  Let fly the headsail sheets!”  With sheets let go, the wind spilled under the topsails and around the foretopmast staysail and jib.  The huge mainsail and foresail were hauled by brute force against the wind until they were parallel with it. Suddenly deprived of the wind’s pressure against her canvas, Island Expedition slowed and the Frenchman surged ahead.
“Now lads!  Sheet home!  Port your helm!  Port battery ready!”
Sails were quickly sheeted home, and Island Expedition lunged forward again, turning across the Frenchman’s stern.  For a brief moment her unprotected bow would point dead on at the corvette’s deadly broadside.  The enemy had just fired and Pierce crossed his fingers and prayed that she could not reload and fire while the British schooner was in this vulnerable position.  The seconds passed with agonized slowness.  Pierce heard the beat of his heart, racing with the terror of waiting.  It boomed in his ears, like the cannon shots he willed not to come.
The French did not fire.  Thank God they were not as quick at reloading.  Very soon now, the schooner’s port battery would bear on the enemy’s port quarter and stern.
“Starboard helm, now!  Port battery, fire!”  The wheel spun, the spokes a blur in the dull light of that somber gray day.  Their antagonist maintained her port turn, initially undertaken in order to close and board.  With the schooner falling back and attempting to cross her stern, the corvette raced to keep that delicate area beyond the reach of the schooner’s guns.  Not being as quick and handy, she failed.  Island Expedition’s port battery crashed and roared.  Flames and smoke belched violently from the twelve-pounders, long guns and carronades alike.  Double shotted, they smashed into the Frenchman’s port quarter gallery and stern windows.
Pierce was satisfied for the moment.  He has successfully gained a position on the corvette’s port quarter.  His vessel was located where enemy cannon fire could not bear, yet he could keep up a continuous and devastating cannonade of his own.  This was more the way he desired to fight.  He had tremendous respect and admiration for Lord Nelson, but did not hold with the Admiral’s admonishment to “forget maneuver and go straight at them.”  Pierce would rather twist and turn, dodge, kick, scratch, and punch if he could.  He wanted to deliver punishing blows, fire bulwark shattering broadsides at his foe, and receive no or very little return fire.  His goal was to damage or destroy the enemy vessel, not his own.  Having reversed his turn, Pierce kept Island Expedition on the Frenchman’s port quarter, following her around in a port turn. 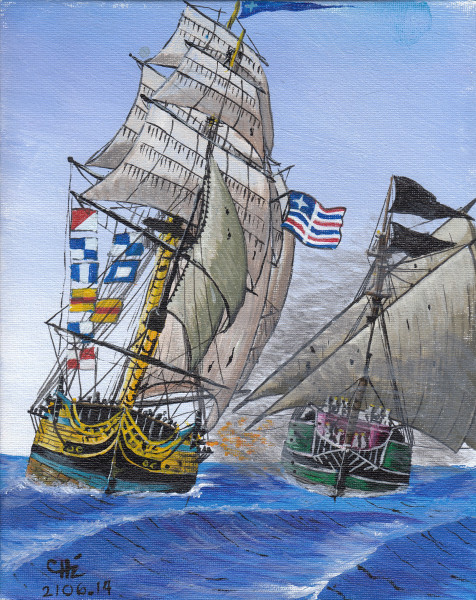