More of the Story 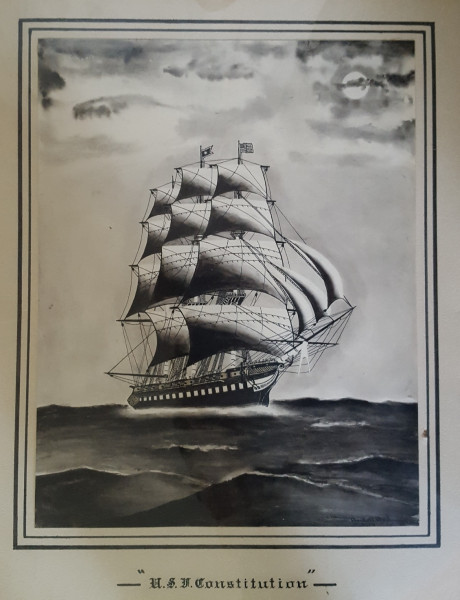 One of my most prized possessions... a drawing of USS Constitution by a friend of my grandmother... done in the 1930s when the  historic frigate toured the US coasts and was in Washington's Puget Sound.
Here is a short excerpt from Chapter Twenty, "Yet So Far to Go," from Sailing Dangerous Waters: Another Stone Island Sea Story.

A stronger gust of wind, blasted cold against his face.  He sipped at his remaining coffee.  Cold!  Damn!  Time to go below for a fresh cup.  He looked around, checking to see that all was normal onboard.  In his current state he sincerely wished that he could spot something amiss to rant about, not so much for it being out of line, but to appease the dark anxiety that gnawed at his being.
As he realized that nothing on deck would give him an excuse to verbally flog some hapless individual, and as he determined to fetch more coffee, the lookout hailed.
“Deck there!  Sail to starboard!”
“Be more specific, Jones!” shouted Andrews, the officer of the watch.
“Nearly abeam of us, sir!  A point, no, two points towards the bow, sir!”
“What do you make of her?”
“Reefed topsails, it looks, sir.  Same course as us, sir.”
“Very well!” interrupted Pierce.  “Mr. Spencer, you may borrow my best glass.  To the masthead with you, and see what you can make of her!”
“Aye aye, sir!”
“Friendly, do you think, sir?” The shouted exchange of orders and information had been heard throughout the schooner. Hands and officers, below in the comparative warmth of the ’tween decks came on deck to see what was about.  Hotchkiss joined his friend and captain on the quarterdeck, habit and duty prevailing.  Pierce honestly thought that his friend would likely avoid him, due to his snappish mood of late.
But Hotchkiss didn’t act according to his friend’s black humor.  That pacified Pierce somewhat, and he replied with unusual familiarity.  “I would expect so, Isaac. It’s either a merchantman or of the blockading squadron. With the weather they may have stood out from shore and a close blockade. And yet a Frenchie may have managed to slip out.”
“Very much my take on it, Edward.”  Hotchkiss paused momentarily.  “I’m sure we’ll know shortly.”
The first lieutenant’s use of his first name, even on the quarterdeck further lightened Pierce’s mood.  “Aye, my friend, we will.”  Normally Pierce was a stickler for formalities while on duty and would have insisted upon proper forms of address.
“Sir! Sir!”  Spencer’s voice sounded distant as he hailed from the masthead.  The winds worked to blow his words away.
“Yes, Mr. Spencer?” shouted Pierce in reply.
“She’s altering course, sir, converging on us now!  Setting topgallants as well!”
“Thank you, Mr. Spencer.  Watch her!”
“Aye aye, sir.”
“It would appear we have been seen, Isaac.  I would think it prudent to have our number and the recognition signal ready to run up.”
“Aye, sir.”
“I believe it would also be prudent to beat to quarters.”
“Aye aye, sir!”  Hotchkiss acknowledged.  He turned to give the necessary orders, but before he could, Pierce stopped him.
“We are in no hurry, Mr. Hotchkiss.  Send someone to check on the progress of dinner.    If it’s close to ready, we will have time for the hands to eat before clearing for action. And we have time yet before she’s near enough for signals.”
“Aye, sir.”
Tags: #amwriting, #indieauthor, #writingcommunity, story excerpts
Subscribe