For me, not a lot, to be sure.
Yesterday I watched the first game of the new XFL, which pitted the Seattle Dragons against the D. C. Defenders.  Naturally I was rooting for Seattle, coached by the Seahawks first ever starting quarterback, Jim Zorn.  It was a good game but the Dragons ended up losing.  I understand they are thought to be the underdog in most games scheduled for the year.

The game itself has a few changes from the NFL to make it interesting, at least in my opinion.  Kick offs are different, largely in an attempt to preserve that aspect of the game, but to also limit or eliminate many of the injuries that occur during those evolutions.  There is no kicked point after a touchdown, but teams can elect to run an after scoring play from any of three different yard lines, with more points being awarded for the longer plays.  If they run the play from the two yard line, it's one point, from the five, two points, and from the ten, three points.  There are some changes in timing during the majority of the game and as well some changes in timing for the final two minutes of the half and the game.

So yeah, I'm a little bit excited about this new pro football league and I hope it goes well.  At the same time I looking forward to this years baseball season getting underway.  Spring training for pitchers and catchers starts soon and before we know it, the actual season will be underway.  With games for one's favorite team being played nearly everyday it'll give me an excuse for not getting things done... or so I like to tell myself.

Just finished up with the February issue of the REAR ENGINE REVIEW, the newsletter for the Inland Northwest Corvair Club.  It's gone out by e-mail to club members, other Corvair Clubs, Corvair and other automotive enthusiasts, family, friends, former classmates, or anyone I think might want to see it.  I'd tell you to visit the Inland Northwest Corvair Club web-site if you want to see it, but the club's web-master has had some health issues over the past several months and doesn't seem to post them anymore.  (I've linked it, just in case you want to visit anyway.)

I needed some filler material in the newsletter to I included the following bit about the number of guns aboard ships during the age of sail.
The Numbers Game During the Age of Sail

During the Age of Sail, warships were ranked and identified by the number of guns they carried, but ships rarely carried the number of guns noted by their official rate.  Certain types or sizes of guns, or guns in certain locations did not count, and the general practice was to equip a vessel with as many weapons as possible.
The typical Royal Navy thirty-eight gun frigate originally carried twenty-eight eighteen pounder guns on the upper gun deck and ten nine pounders on the quarterback and fo’c’sle for a total equal to their rated thirty-eight guns.  With the rising popularity of the light but powerful carronade, frigates began adding ten or so thirty-two pounder carronades to the existing armament.  Now carrying a total of forty-eight guns, these frigates were still rated as thirty-eights.  The carronades did not count.
In some cases the original nine pounders were removed and replaced with an additional ten or so carronades.  As these substituted for guns originally figuring into the ship's rate, they were not discounted.  Otherwise the ship would have been re-rated as a twenty-eight gun ship; a sixth rate instead of a fifth rate.
It was not uncommon for warships to be armed with as many as ten or even more guns over their official rate.  USS Constitution, famously known as Old Ironsides, is identified as a forty-four gun frigate. Yet for much of her fabled career, she carried fifty-four or more guns, as did her sister ships, USS United States and USS President. 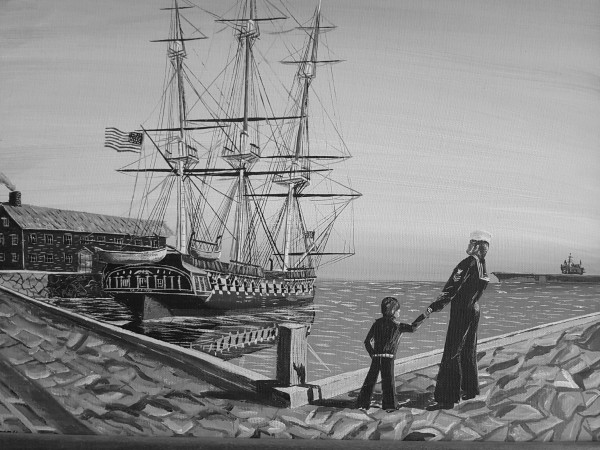 B & W version of my painting of USS Constitution, with USS Forrestal on the horizon, painted in late 1986 after returning from a deployment aboard Forrestal.
This difference in official rate and the number of guns actually carried often provided material for the spin doctors of the day.  One referenced one's own ships by their official rate, and referred to the actual or reported number of guns aboard an enemy vessel.  Thus the battle between USS Constitution and HMS Guerriere would have been chronicled by Americans as "our ship of forty-four guns defeated an enemy vessel of forty-nine guns."  It makes it seem as if "our" ship was the smaller of the two, and thus won a more improbable battle.  The British would have stated that their thirty-eight gun frigate made a valiant effort against a much larger opponent of fifty-five guns... offering condolences, and even excuses for the loss.
Simply comparing the number of guns, as rated or as actually equipped, does not allow for differences in the size of those weapons.  In the engagement noted above, the American frigate was armed with twenty-four pounders on the upper gun deck against her Royal Navy opponent's eighteen pounders.  Constitution also carried more thirty-two pounder carronades on her quarterback and fo’c’sle when compared to Guerriere.  (The other US forty-four gun frigates were commonly armed with forty-two pounder carronades.)
It should be noted that Constitution was larger and of much heavier construction.  The American frigate had a much larger crew, enabling her twenty-four pounders to fire as fast as the British eighteen pounders.  Additionally American crews were able to conduct more live firing practice.  British crews were often restricted to due to allowed supplies of gunpowder.
Logically, a larger vessel, with a larger crew, and more and larger guns should be the victor, but what happened when opponents were evenly matched?  Then the deciding factor was often which crew was better trained and more experienced.  USS Chesapeake and HMS Shannon were close to evenly matched in terms of armament.  Shannon's crew had been together for years, her captain placed a great deal of emphasis on gunnery, and even provided additional powder for practice from his own funds.  While he had had success earlier in the War Of 1812, James Lawrence had just assumed command of Chesapeake.  Many of her crew were also newly reported aboard.  Thus when she sailed from Boston on June 1, 1813, to accept the British challenge, it was with a crew and captain that had never operated together.  This lack of experience resulted in a British victory after just a few minutes of battle.