I'm trying (and so far not succeeding) to get back to posting on a regular basis.  Noticed it has been well over a month since positing an excerpt from the Stone Island Sea Stories, so here's a bit from Chapter Twelve of Beyond the Ocean's Edge.  This was a fun chapter to write as it deals with the ceremonies of crossing the equator. 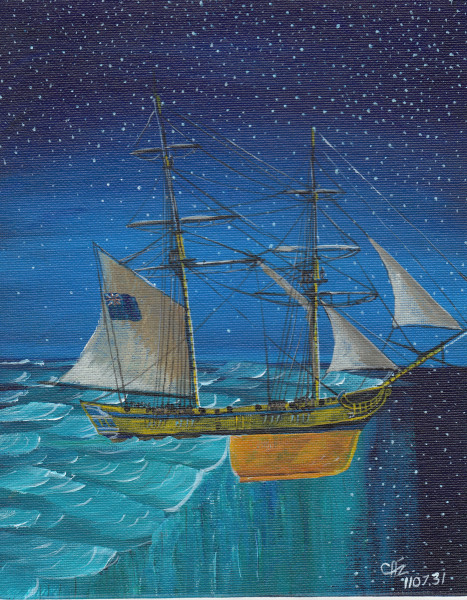 My second attempt at a cover image for Beyond the Ocean's Edge: A Stone Island Sea Story
A battered and tarnished crown appeared even with the deck.  The pipes started caterwauling and the crown was followed by King Neptune himself.  His hair was long, matted, and the color and texture of oakum.  His beard, much the same in appearance, covered the Royal face and fell in dripping masses to his waist.  His garments clung damply about him, and whereas they were purported to be of the finest cloth available, they appeared to be old sailcloth draped haphazardly about him.  Neptune clutched a makeshift trident in his right hand.  It had once been a boarding pike, but had two extra tines riveted to it.
He struck the trident’s haft sharply against the deck. “Avast there, mate!  Belay that damned screeching!  Hoist my flag!”
At the Royal command the pipes fell silent.  Hopkins hoisted a black balled bit of cloth to the peak.  A sharp tug on the halyard broke the flag out into the wind and the Jolly Roger flew alongside the Blue Ensign.
Others of the Royal Party began to climb the side of the Island Expedition.  First was Davy Jones, the Royal Scribe and Emissary.  After him came the Royal Princesses.  Surely no king had ever sired such ugly and undesirable females as had Neptunus Rex.  Their long unkempt hair was the same color and texture as his.  They were dressed in old linens wrapped about their persons and secured about their ample waists with lengths of cord.  They giggled bashfully, and hid their countenances behind their hands or their fans.  At least two of the princesses could have shaved better that morning.
The last on deck was the Royal Baby, an infant fully the size of a grown man.  His diapers were of stout sail cloth, stained, dirty, and reeking.  For a child of such tender years he had an extensive growth of hair over his upper body, matted and curly on his chest, back, and upper arms.  Like his sisters, the youngster had forgotten to shave, and a dark shadow manifested itself on his face.  His bald baby head showed signs of stiff and bristly stubble.  A mixture of slush, tar, paint, and varnish adhered to his ample midsection.
“Welcome aboard, Your Majesty!” Pierce said and bowed low and elaborately.  “We have seats for you and the Royal Party.”  He indicated the chairs placed on deck, one of which was raised slightly higher than the others.
“Very well, Captain Pierce!” Neptune replied with a slight impatience.  We shall be seated, and then to business.”
“As you desire, Your Majesty.”
Neptune and his party sat.  “Is everyone on board topside?” he queried.
“Yes, Your Majesty,” answered Pierce.
“Now see here, Captain!  Ye seek passage into my realm with this scumbucket garbage scow and these scurvy dogs of crew and passengers?”
“Yes, Your Majesty!  But I would hesitate to describe this vessel or her company in such terms,”  Pierce responded.
“Silence thy tongue, ye lubberly polliwog!  Ye are as I say!  Until inspected and found worthy, ye shall not enter my realm.”  The Ruler of the Raging Main stood and rapped solidly on deck with the haft of his trident.  “Let all that have previously been tried and found acceptable come forward!”
Four hands, two warrant officers, and three passengers stepped forward.  Neptune called each by name and heaped praise and good wishes on them.  Still, he was offended that they were aboard a vessel infested with so many detestable, slimy polliwogs.  He was particularly insulted that they had dared sail with a captain never before found worthy.  Neptune offered that they could redeem themselves by assisting in the Royal Court’s inspection and examination.