Well here we go with an excerpt from Chapter Twenty-Five, "An Unnoticed Return" from Sailing Dangerous Waters: Another Stone Island Sea Story.  This happens to be the final lines of that chapter. 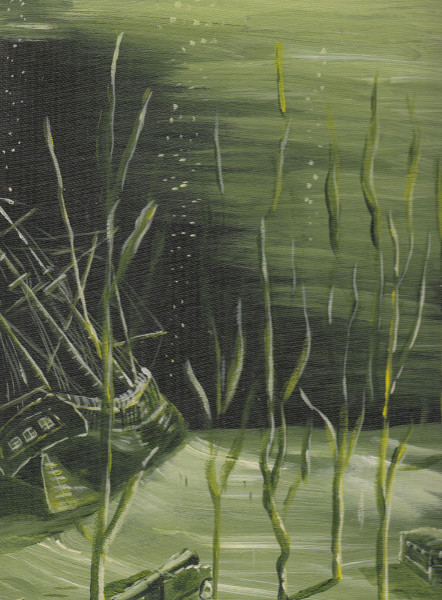 One of just a few sunken ship pics I've painted over the years.

“Yes,” said the unidentifiable presence.  “It was his debt and a willingness to do anything to pay it that let to his recruitment.  On the other hand, Commander, you accepted command the schooner with no question of pay at all.  If I understand correctly, Smythe had to insist that you even discuss it with him.”
“I suppose that’s true, sir.”
“That was the biggest factor in granting our approval for him to hire you.  The arrangements with the Navy were a matter of convenience for all of us.”
“But what now, sir?  What do we do?”
“You may do as you wish, Commander.  If it is in your destiny to continue in service to the guardians, you will.   We will never insist or ask you to turn your back on your country or friends.”
The conversation continued for some time after that remark.  At long last the old man, for there was something in his very presence that suggested antiquity, rang a bell.  In a few minutes, there was a knock at the door.  It opened, revealing Mr. Clemens who escorted Pierce and Hotchkiss through the club and back to the small suite of rooms at the Admiralty.
For a long time upon their return, neither Pierce nor Hotchkiss said much.  As neither made any preparations to sleep, it was obvious that the day’s conversations continued to influence their thoughts and actions.  At last, over a second glass of fine Madeira, Pierce said, “Isaac, did you notice the gentleman’s ring?”
“Why no, I didn’t.”
“Perhaps there was not enough light from your seat, but a time or two he extended his hands out of the shadows.  Old hands, gnarled, and wrinkled; bent and broken with the rheumatism, but on one he wore an exquisitely fashioned ring.”
“Not improbable for one reportedly having great wealth, Edward.”
“No, the ring itself did not amaze me, but the figure under the translucent blue stone did.”
“May I ask what it was, Edward?”
“Of course.  It was a white, or lighter blue, four pointed star.”
“The same as the Unity Congress symbol?”
“Aye!  Exactly the same!”
Collapse