Hey, we are getting really close to publishing the third Stone Island Sea Story, Darnahsian Pirates.  I'm going a different route than I did with the first two books.  Those were published through a self-publishing assistance company.  Honestly, for what they are or claim to be, they did a great job.  Still, it was more expensive than going through KDP as I'm doing with this one.

I've had both the interior and cover files on hand for a while, but was waiting for some finalizations from Sue who did much of the editing and is helping with formatting and the like.  She's the one who actually made the files and the cover from my painting and suggestions.  Anyway, we decided on Monday that I should upload and order proof copies to see just what needed to be fixed or changed.  I tried to do so a couple days ago, but evidently the size of the cover was off a little bit.  Later, she realized she'd calculated it based on white instead of cream for the interior.  That got adjusted to spec and it uploaded fine, earlier today.  Currently it's there as a draft, but I have ordered proof copies.  Hopefully we won't have to make many changes based on how those come out and I'll be able to push "publish!"  I'm guessing it'll be another week or two.

Right now we are working on getting the paperback version out there, but once that's done we'll go for the Kindle version.  Later I hope to get it on to B & N online and Nook as well.  Then I'll see about re-publishing the first two with KDP.  If anything, it should cause the cover price to drop a bit, and should also give me a higher royalty than before.

Now I guess I should start or get back to work on book four.  I did two or three chapters on it as I finished up this one, but haven't done anything with it for a while.  I'm also looking at creating a sort of companion book to the Stone Island Sea Stories, perhaps with something about how they came to be written, perhaps a glossary of naval terms, etc.  Maybe a list of characters, ships, locations and the like, as well.
Dave 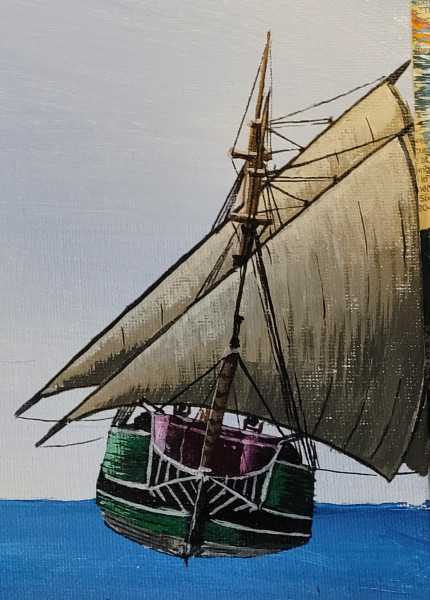 This was taken fairly early on in the process of creating the cover... the second and final attempt.
Dave
Collapse