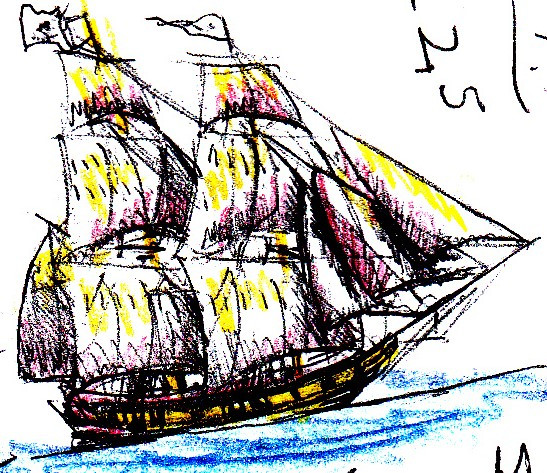 Brig under full sail.... basically a doodle from a few months ago. Original is not much larger than a postage stamp.


“By God, Pierce, it is you!”  The voice, from a more forward location sounded very familiar.
“Mr. Sollars?” asked Pierce.
“Yes, Pierce.”
“Where are you?”
“Forward, locked in the bo’sun’s locker.  Lift the latch, would you, sir?”
It gratified Pierce having Sollars address him as “sir.”  He stepped forward and lifted the latch, a simple but effective device that locked whenever the door was shut.  It had provisions for a lock, so that items placed inside would be safe from pilferage.  A latch string normally led thru the door, allowing anyone inside to open it.  To secure the prisoner housed there, the string had been removed.
When Sollars first spoke, the other Englishmen set up a clamor.  “Some quiet, if you please!” shouted Pierce.  “Sergeant, see these people are taken aboard the Island Expedition.  The colonists’ berthing should suffice to accommodate them.”
“Aye aye, sir!  Gentlemen, if you’ll come with me.”
“Oh thank God you’re here, Pierce!”  Sollars stepped out of the bo’sun’s locker and stood near Pierce.  “It looked like I’d be aboard this damned Frenchman until the second coming.”
“You may go with the others, Mr. Sollars.  I’ve got work enough, ensuring this vessel is secure.”
“Yes, quite.  But!  Well, you see, Pierce; I do not get along so well with some of my fellows.  Business you, know.”
“Indeed?”
“As you may notice, Pierce,” Sollars said with a condescending tone, one reminiscent of their days aboard Theadora.  “I am no longer a King’s Officer.  I’m a merchant.  Owned and captained my own vessel, until this damn Frenchman came along!”
“Your troubles with your companions?”
“Oh, I underbid someone on a shipment.  The others are friends, good friends, and I am the outsider who bested one of their own.  Had to beg the Frogs not to lock me up with them when going into action!”  Sollars rubbed the top of his head and grimaced slightly.
Pierce looked at him questionably. “Injured, Mr. Sollars?”
“Of all the fool things!  With the time I’ve had at sea, I hit my head on a deck beam.  Damn near laid me out.  Still quite sore.”
“I see,” said Pierce.  “But we should go topside and see you safe aboard Island Expedition.”
“Yes, quite.”
“I thought to provide you a place in passenger berthing amongst your companions.  But as you have difficulties with them, I shall be required to turn Mr. Hotchkiss out of his cabin and provide you with his.”
“Most generous of you, Pierce.  Mr. Hotchkiss as well, I should think.”
In the better light of the upper deck, Pierce noticed that while Sollars was not wearing a hat, the dent caused by one was evident in his hair.  “Your hat, sir?  Did you misplace it?”
“Damn!  I must have left it below.  I shouldn’t worry about it.  It was old, and I have another.”
Collapse