Wow, it's been nearly three months since I posted anything on this topic or series of posts.  I just went back and looked at that last post, which dealt with editing.  Reading through it, I noticed it could have used quite a bit of it.  I hope you understand that in most cases, what I post here is as it occurs to me.  It is basically first draft so I'm not really surprised to find a lot of errors.  I do try to read through it and catch what I can, but... Anyway I'm not going to obsess with making it perfect.

As I've talked about the writing and editing process, I've occasionally mentioned standard format, so perhaps I should dwell on that for a bit.  First of all, what is it?  It is the style or appearance an agent, an acquistion editor, or other publishing proffessional  would expect your manuscript (full or partial) to be in when they receive it.  That means certain margin settings, fonts, font sizes, etc.  Basically one manuscriipt should look like any other manuscript.  One should have to read them to tell the difference.  Anything out of the ordinary that calls attention to a manuscript does that manuscript no favor.  So forget the idea of a different eye-catching font, printed in a bright vibrant color on an equally hued back ground.  You want the person you sent your manuscript to to judge it on the quality of your writing, not on it's appearance.  In most cases, straying from what is considered standard or acceptable can be detrimental to furthering your publishing ambitions.

So how did standard format come about?  If we go back far enough in time, we find that everything written was hand written, or to be specific, a manuscript.  The only way to obtain additional copies of the work was for someone to sit down and copy the original, letter for letter, word for word, page for page.  It made books rare and expensive, and also might be the origin of the term copyright.  In the 15th century or so, the printing press with moveable type was developed, and once the type was set, many copies of a book could be produced fairly cheaply.  Still, that first copy, the one from the writer to the printer, was hand written and usually referred to as the manuscript.  (I can imagine printers pulling their hair out, trying to interpret certain authors' handwriting.  Had I lived and written in those days, I'm sure they would have dreaded receiving anything from me.) 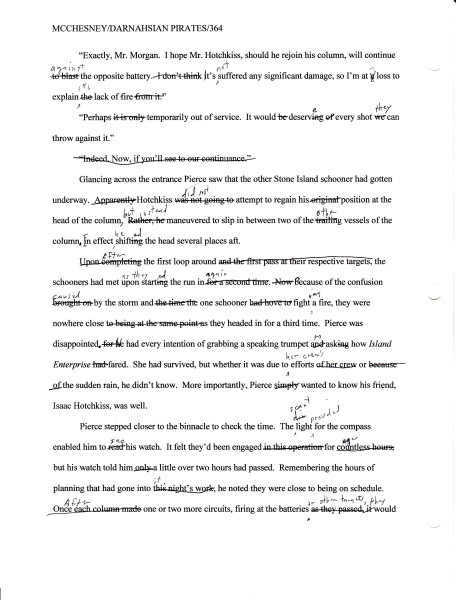 This heavily edited page from Darnashian Pirates might serve as an example of something in standard format.

The typewriter was developed and came into use in the later part of the nineteenth century.  Samuel Clemens or Mark Twain is said to have submitted the manuscript for The Adventures of Tom Sawyer in typewritten form, and it became the first book so submitted.  Probably because the typewritten manuscript was easier to read, the idea caught on and in a very short time it became the standard way of submitting written work for publication.  I think we can assume there were formating rules and practices in use with the handwritten manuscripts, and many of them no doubt transistioned to the typewritten variant.  Even then, there would have been a certain standard that publishing folks would have looked for.  And we should remember, typewriters are much more limited in what can be done, or what one can choose to be done.

Thus when computers and word processors entered the picture a few decades ago, people in the industry still wanted manuscripts to have the same basic appearance.  They made their preferenced known as to what fonts and font sizes most closely matched the typical typewriter, and what computer features and options would be acceptable versus what was available before.  So as I understand it, a manuscript produced on a computer should look as much as possible like one made on a typewriter.

We also want to remember that we are talking about the manuscript, what the writer or author produces and submits to the agent/acquistion editor/publisher, and not the print formated version.  Anyway, the next time I manage to get back to this, I'll talk a little about the specifics of standard format... at least as I understand it.  And finally, while we call it "standard" there are a lot of differences in what people consider to be standard.
Thanks for your time,
Dave
Collapse