Currently the entire Pacific Northwest (of the USA) is under what many describe as a heat dome.  Looking ahead, it's supposed to stay in place for at least the next week.  There are many expectations that daily, weekly, and monthly temperature records will be tied, broken, or even shattered.  Yesterday we surpassed 100 degrees, F. and it is supposed to be warmer today.  Tomorrow is supposed to be the hottest, but we are projected to have temperatures of over 100 for several days to come.  At 10:30 this morning, our cheap little thermometer out back already registered 93F.  By my calculations that's around 33 or 34C.

One of the nice things about living where I do, is that weather like this typically doesn't last that long.  In a couple weeks time we are likely to be back to something more normal, or perhaps, something on the cool side of average for this time of the year.  I've lived or been stationed (while in the USN) in places where we'd reach temperatures like this at the beginning of summer and then just stayed there until well into autumn.  At times I can remember wishing for one or two days of temps in the 90s, just for the slightly cooler effect it would have, or for an hour's worth of rain to cool and refresh everything.

I'm going out every other morning, hopefully before it gets super hot and doing the hand watering.  Also trying to do a little bit of yard work then, but for the most part I'm trying to stay in and out of the heat.  I'm old enough now that I don't do as well in it as I once did.  Hopefully that means that I'll make progress towards getting the third Stone Island Sea Story ready for publishing.  Also have some other computer related things to work on.  Newsletters for Spokane Authors and the Inland Northwest Corvair Club, as well as the SASP web-site, and maybe a start on the fourth book in the Stone Island series.  And I'm toying with the idea of a companion book for them, something that explores the story behind the stories, etc.  Would like to include a glossary of nautical terms, perhaps a list of characters, maybe a list of the various ships and vessels, etc.

I do find that I don't have the persistence, the "stick to it" gumption that I once did.  Now, if I work on something for a while, I want to get a way from it sooner than I used to, and often it is difficult to get back to it after even an extended break.  And while I don't mean to use him as an excuse, Coco sometimes wants to play or go for a walk at the same time I'm trying to concentrate on something.

You may have noticed that lately I haven't mentioned what I'm reading.  That's because with the current mood, I just haven't been.  Closest to reading, I guess is doing a proof read of Darnahsian Pirates: The Third Stone Island Sea Story.  We've had it formatted into book format and ready to submit for some time, but recently I realized that I should take an in depth look at it and try to catch any errors that may have escaped the editing process... or may have even been introduced during the editing process.  Overall, though, I find that it is very clean.  I've two chapters, out of twenty-seven, left to go through, and my list of corrections and changes is less than a single page.  It seems to me that there were a lot more corrections needed in my first two books when at this stage.  (Those two were published via a self-publishing service company, who had them edited as per my request.  The fellow member of SASP who edited this one definitely did a great job.

Hoping that I'll get my daily routine organized enough that I get back to posting more regularly here.  I want to continue on with "Thoughts on Writing" and with posting excerpts from each chapter of the Stone Island Sea Stories. 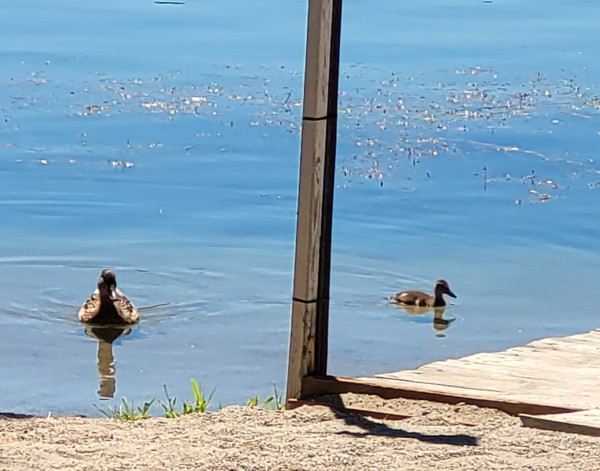 Last Monday we took a drive to Waitts Lake, an hour or so outside of Spokane.  While there, I spotted this duck and duckling swimming near the dock.
Dave
Collapse