Day by day it seems we get closer to finalizing a cover for the third Stone Island Sea Story.  Here is what I intend to go on the back, the blurb so to speak.  Not saying it won't change, but at this point this is what I plan for it.  As with the first two books, this is scene I'm trying to depict in the cover art.  Then, of course, a bit of what the book is about.

A final broadside roared from the port battery, sending twelve-pound shot and massive clouds of musket balls and jagged pieces of scrap metal―langrene―into the Darnahsian Pirate vessels. Splinters buzzed through the air. Lines snapped, their freed ends slicing like whips. Mooring bitts, fife rails, handrails, and other deck furniture disintegrated. Bits and pieces of what had been human beings splattered the bulwarks and deck. “Get those lines across!”           Grappling hooks soared from the schooner’s port side and lodged in the pirate’s hull and rigging. The lines were drawn tight, and the two vessels lashed together. In the bows, the Kalish warriors continued their ungodly howl as they unleashed volley after volley of arrows into the amassed pirates. At Sergeant Lincoln’s order, blue-coated marines stepped to the rail, avoiding the seaman securing their guns. When he gave the word, they raised their muskets as one, and at the command, “Fire!” let loose a volley into the exposed enemy on deck. Then they fixed bayonets and prepared to board.
“Boarders away!” yelled Pierce, springing for the rail.

Having returned to England and reuniting with Evangeline, Edward Pierce once again sails beyond the ocean’s edge, this time accompanied by two additional vessels.  Arriving at Stone Island, they are devastated to find Evangeline’s father absent.  Pierce once again sails dangerous waters as he leads a combined naval expedition to rescue several Vespican governors, among them Harold Smythe, Evangeline’s beloved Papa, held for ransom by the Darnahsian Pirates.

And here is the cover as it currently exists.  There's a chance that we might change the color of the author's name near the bottom to make it more visible against the water. 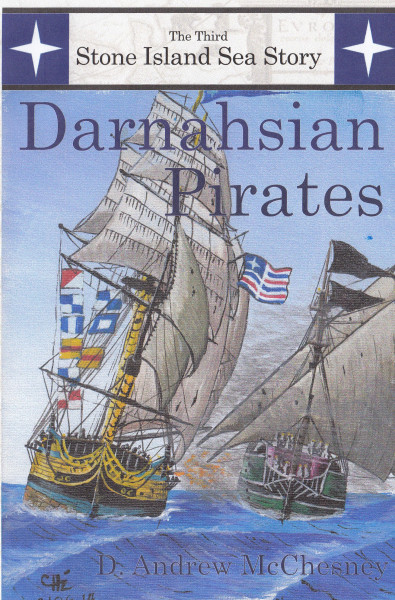