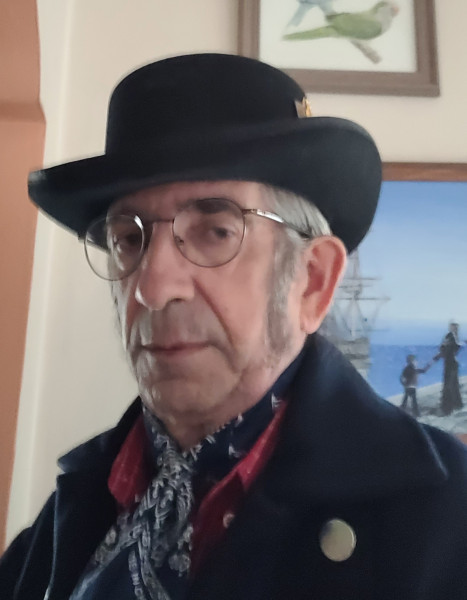 Some how I've managed to wile away the past couple of months without posting anything here.  Can't say it was anything specific that prevented it.  I guess I've been distracted, out of sync or what have you.  And it may be because baseball season is in full swing and I'm trying to watch all the Mariner games that I can.  That just might take enough of a bite out of my day, that with any disturbance in my ambition level, I just don't get around to things I should.
Anyway, following is another excerpt from my second book, Sailing Dangerous Waters: Another Stone Island Sea Story.  This comes from Chapter Twenty-One, "Obstacles to a Return" and is the opening two or so pages of that chapter.

Pierce felt fear creep into him.  He was cold, colder than he should be, even on such a raw and blustery day.  At the same time, the dampness of an unwelcome sweat soaked into his clothing.  God, he wished that he wouldn’t go through that every time combat loomed.  Yet, it had happened so many times in his naval career that he had come to expect it.  If he didn’t experience those symptoms, and went into battle unperturbed, something would be wrong.  Still, Pierce wished he could approach danger with the same ease it seemed everyone else did.
“I shall go below momentarily, Mr. Hotchkiss!” he said as nonchalantly as possible.  Fear of possible battle caused him to think he might need to use the head.  However, years of experience told him it would be a wasted trip.  Still he could go below and get some coffee, which he had determined to do when the lookout had hailed.  He would simply carry on with his original plan.
When he arrived back on deck, Midshipman Andrews reported Eubanks had allowed that dinner could be served in five minutes.
“Very well, then,” said Pierce.  “In five minutes you may pipe ‘hands to dinner.’  You may also pipe ‘up spirits,’ as well.  A warm meal and a splash of grog will warm us all. Depending upon what our friend is up to, it may be our last chance at either for some time.”
Aye aye, sir.”
Five minutes later, the bo’sun’s pipes squealed, and the majority of the men aboard the schooner ate their dinner an hour and a half early. Pierce went below to join the others of the combined wardroom and gunroom. Today was his turn as host, and the members of those two messes were in essence, dining at the captain’s table at his invitation.  As he arrived, they stood.   He bade them to be seated and added.  “We’ll not stand on formalities today, gentlemen.  Eat quickly if possible, and return on deck so those with the duty might also dine.  I see no great rush at this time to go to action stations.  Yet, should our approaching friend prove hostile, we must be ready to flee or fight.” 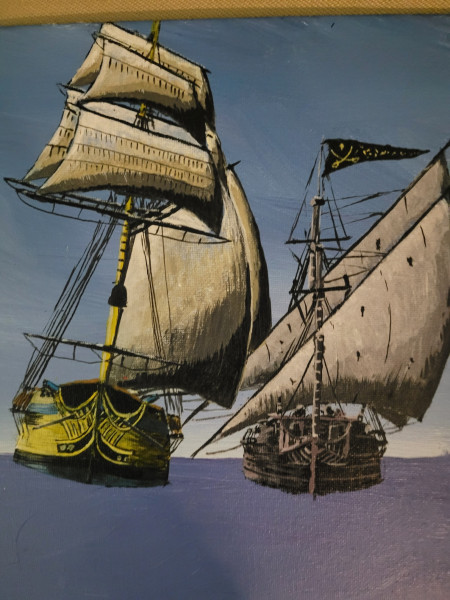 In progress pic of what I hope will be the cover art for Darnahsian Pirates: The Third Stone Island Sea Story  Always a chance that I won't like the final result and will try again.  As it is, I'm not 100% happy with it, but hope to finish before decideing one way or the other.


He watched as the others tore into the meal with hearty appetites.  They ate as if they had not eaten in weeks, even as they faced the possibility that they would never eat again.  Pierce picked at his food, ate a little of this and a little of that, and hopefully made enough progress with his vittles to make it appear he had eaten as well as anyone.  He had no appetite, even though the meal was a favorite.  In spite of the stores’ age, Eubanks had done well in preparing it.  Pierce hoped the approaching ship proved friendly, and they would not have to fight. Then he would be able to eat and enjoy supper that evening.
While he picked half-heartedly at his dinner, he enjoyed the company of the others.  Did the prospect of conflict drive away some of his dark and brooding melancholy?
On deck, noting that Master’s Mate Dial had eaten, Pierce said.  “To the masthead with you, sir.  Keep an eye on our friend there and allow Mr. Spencer his chance at dinner.”
“Aye aye, sir!”
When Spencer descended to the deck, Pierce intercepted him.  “Now, lad, what is our friend there up to?”
“She’s seen us for sure, sir.  When I first went aloft, she was on the same course, or nearly so, maybe a point or two to the north.  She’s altered sir, more northerly, even a bit to the west. She’s closing now, sir.”
“As I thought, Mr. Spencer.  Go below, have your dinner, and your spirits.  Warm up, and perhaps we’ll have a warmer time of it during the afternoon watch!”
Collapse