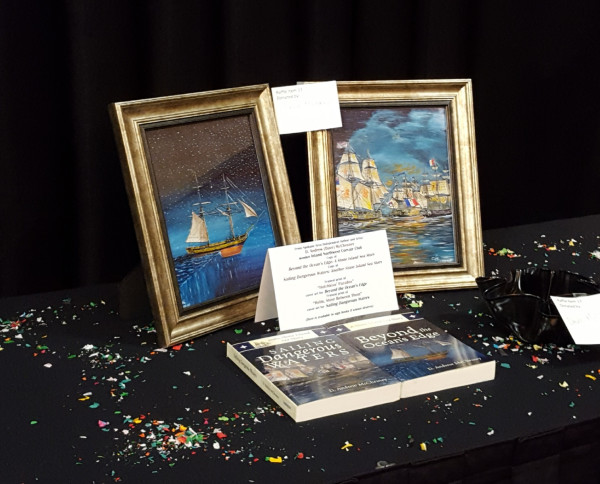 My two books and framed prints of the cover art were available as a raffle prize at a car club event a couple of years ago.

It looks like we might be getting close to ending the discussion dealing with editing.  Last time I mentioned (and will now attempt to answer) the question of, "do I need to spend money to have my work edited?  Like many things connected with writing, there is no one answer, no absolute response.  And the answer might depend upon how you are (or plan to be) published.

If you are or plan to be traditionally published, it's usually understood that you, the writer does not have to pay for editing.  That expense is shouldered by the publisher as a part of the process.  And even before one has a publishing contract in hand, it's possible the agent and the acquistion editor might do some editing, offer some suggested changes, note some corrections, etc, before pitching the work to the next level.  Normally that would be a part of their job to give your work a better chance of succeeding.  In other words, they don't charge for it.

These days it's generally understood that one's manuscript should be a perfect and as clean as possible before beginning the search for an agent and eventually a publisher.  That's why once you've finished the first draft, you need to do as much self editing as you can.  Have as many early readers, critique partners, etc as you can muster.  Folks that you would normally exchange services with, or who will read, critique, or possibly lightly edit without costing a fortune.  If after several submissions and responses that indicate your work isn't ready, you might want to consider hiring an editor.  Again, only if seems to be the only thing left to do.

While I certainly don't want to deprive hard working editors of their livelihood, as a writer I want to spend as little as possible to see my work polished to near perfection.  I would not finish my first draft and immediately hire an editor, saying, "Here, fix this and make it sing!"  Just too expensive, and I find that a lot of the satisfaction in writing is in polishing and perfecting what I wrote.  When I'm at the point where I would consider hiring an editor, I want it to be as a final check, a once over to catch anything I might have missed.  Again, if one is looking to be self-published, it's possible you will not need to pay for editing.

Now if you self-publish, I'd say that you should count on having to hire an editor.  Again, I believe you should do as much as possible before that eventuality.  But no matter how much work you do on your manuscript, it's always possible you've missed something, so hiring someone for a final look see is a good idea.  And we should remember that one of the big knocks against self-published books in general is that they often have more than their fair share of errors and typos.  Often, I believe, a self-published author gets to excited to see his/her work in print and publishes too soon.  Perhaps one more pass through the pages, or having another set of eyes take a look would have been worth the time and the expense.

And yes, I did have both of my already published Stone Island Sea Stories professionally edited, via the self-publishing service company I worked with.  When I sent the  manuscripts in, I thought they were a clean and perfect as possible.  You would not believe how much red showed up on them when I got them back.  And yes, having ready both in the final published versions, I've found errors.  The big thing to remember is that they are far fewer than they would have been.  (And we all hear constantly about the errors that seem to turn up in traditionally published books, even those from well known authors put out by big name houses.)

For the soon to come third Stone Island Sea Story, I hired a local fellow writer and editor who I believe did a remarkably thorough job and who is also helping me set up to publish via a different route than before.

One last thing regarding editing, I hope.  In most cases, corrections and changes recommended by an editor are suggestions only.  You do not have to make the changes or corrections if you do not want to.  (On my first two books I found I accepted or incorporated 90% or so of what the editor suggested.  Sometimes it might be a matter of genre, or voice.  The editor might make a correction to stay with perfect or proper grammar, but you decline because of what you feel your character would say.

The possible exception to the above is when you have a publishing contract and the publisher's editor suggests changes and corrections.  Then it often is a matter of just what is in your contract.  Many times at that point you are obligated to make the suggested  changes.  If you feel an occasional change is not warrented, you need to be able to defend it with some level of logic.  Just saying, "I don't want to change," doesn't cut it.  And sometimes publishers might ask for wholesale changes regarding the story,not just a word or two here and there.

So, next time I'm thinking we'll take a look a t the publishing process and the variations thereof.  For those who celebrate it tomorrow, I wish you all a Happy Easter.
Dave
Collapse