About time for another bit from Sailing Dangerous Waters: Another Stone Island Sea Story.  This time a brief look at Chapter Eighteen, "Final Departure." 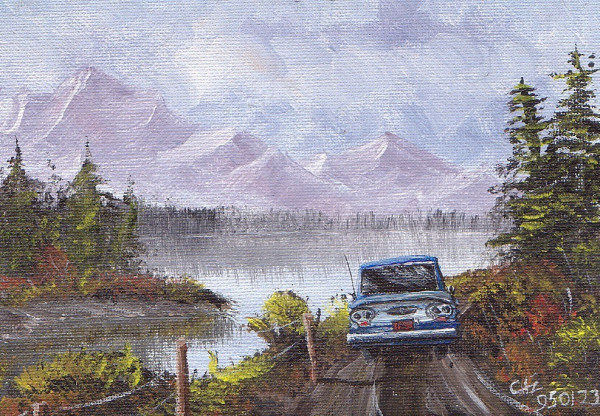 My painting of a Corvair "Rampside at the Lake" from several years ago.  I imagine that in some places, Stone Island might look a lot like this.
Aboard the schooner, Pierce checked briefly with the officer of the watch and then went below to his cabin.  Folsum, a member of the watch on deck, and ashore only by his captain’s request, went forward to join his messmates.  Pierce wondered briefly just what the young seaman would tell his friends about the day’s proceedings.  By the next day he supposed, the tale would be that he had spurned her advances, and that the lass had clung to him bodily, even as he left the Colony Building.  By the time they sailed, the story would have Folsum as a hero amongst his shipmates.
Now however, Pierce had something to do.  He had thought of it often in the last days of the voyage back to Stone Island.  Yet he had not been able to sufficiently organize his thoughts and emotions to be able to write the letter that he must write.  The day’s events and the thoughts they had brought forth within him, emphasized that he must now take pen in hand and write a letter of condolence to Leona Jackson.
He had a difficult time writing that letter.  While she often seemed to dismiss Captain Jackson as an annoyance in her life, Pierce did not know of her true feelings for the man.  Had she truly loved him?  Did he have some emotional hold over her?  Had there been a bond that even their lustful wanderings could not break?  He did not want to trod unbidden into such territory.  He also had to assess his own feelings.  For him their relationship had primarily been a matter of physical attraction and availability.  At times he remembered her with affection, and at times near loathing, especially in light of the trouble their relationship had eventually caused.
He could not tell her that he had conspired to be the agent of her husband’s death.  Yet the letter had to be written, and written in such a way as to convey his truest sympathies for her loss, and not mention his intention of causing it, or his overall sense of relief at what had finally occurred.
Shortly after four bells sounded in the evening watch, Pierce finished the letter and signed his name at the bottom.  He sanded it, folded it, and with a weary cramped hand addressed it.  He laid it aside, ready to take aboard Evening Star the next day.  Then he went forward for a somewhat fresh cup of coffee at the camboose.
As he returned to his cabin, Pierce knew that the night would be one of little sleep for him.  The coffee he carried with him, and the three cups he had consumed while writing the letter would not be the cause of his wakefulness.  No, it would be that in writing his condolences and sending them on to Mrs. Jackson, he had started to think of Evangeline again.  That was always a dangerous thing to do, as it caused interference with his required and desired rest.  He sat for awhile in the dim glow of a single candle, hoping his mind would relax and drift away from thoughts of her.  If it did, and if he could keep it from returning to that subject, perhaps he could eventually fall asleep.
Every time he realized that he had quit thinking of her, and every time he felt ready to drift into slumber, doing so would bring Evangeline to the forefront of his memory, and once again he would be wide awake.  Perhaps it wasn’t such a bad idea to think of her at times.  After all, in a week’s time he would be departing Stone Island, enroute to his world and her.  With this thought and the realization that sleep would elude him that night, Pierce slipped on his shoes, pinched out the candle and went on deck.
Collapse