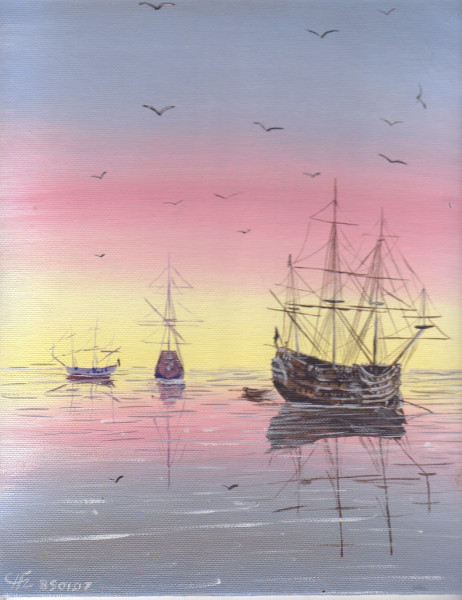 "Evening Anchorage" portrays ships typical of a time a hundred or more years earlier than the events related in the Stone Island Sea Stories.


“If I may be so bold, sir, this is all quite interesting,” said Morgan.  “Yet it does not explain that the Gallicians were not responsible for their frigates giving us chase.”
“You are so right, Mr. Morgan.”  Cooper’s glass had been refilled, and he drank lightly from it.  “It would take the rest of the night,” he said, raising his glass in salute, “to follow in detail the course of the professor’s reasoning.  Simply put, he understands the Ancient Ones to have pre-dated other early civilizations.  He says that obscure and little remembered legends attribute them with great magic, perhaps knowledge and technologies beyond what we possess today.  He thinks that some believe that knowledge exists on Stone Island.”
“And we dig ourselves even deeper into a world of superstition and magic,” groused Andrews.
“But would you have considered the possibility of this world, Mr. Andrews, when we were blockading France in Theadora?  Would Vespica, Grand Triton, or Gallicia have meant anything to you then?”
“Aye, I do see the point, sir.  Still, I do not understand how all this relates to the chase.”
“According to Professor Parks, it is quite simple,” said Cooper.  “He believes there are groups that seek that ancient knowledge, just as others work to keep it hidden.”
“You suggest, sir that one or more of these groups may be behind the Gallician pursuit?” questioned Hotchkiss.
“I don’t suggest it, sir.  Professor Parks suggests it, and truth be told, by the time he reached that point, we had drained more than a few bottles.”
Smythe grinned somewhat sheepishly.  “Perhaps the good captain has taken us all on a voyage outside of reality.  Indeed, Captain, was there ever a Professor Parks aboard Evening Star?”
“Whether the professor exists or not, sir,” said O’Brien, “It’s a damned good tale at that!”
“Hear!  Hear!” said Pierce.  “A toast to the professor!  Does he not exist, than a toast to Captain Cooper for the most delightful invention of him!”
After the toast was drunk, and after the laughter died away, the merchant captain regained his composure.  “My friends!  I understand your amusement and lack of belief.  Yet, Professor Parks is real as any of us.  In fact, I have a letter for you, Governor, from him.”  Cooper reached into his pocket, withdrew the letter, and handed it to Smythe.
“As he traveled aboard Evening Star, he was enroute to study ancient ruins recently found in Western Baltica.  He expressed a great desire to one day go to Stone Island to study any remaining artifacts first hand.  He is a rather quaint fellow who would not visit without first asking your blessings on his presence.  Such, as I understand it, is the purpose of the letter.”
“Do forgive us, Captain Cooper.  I shall look forward to a visit from the learned gentleman,” said Smythe.  “In fact, sir, as you are accompanying us to Stone Island, I will draw up a letter for the professor, which you may deliver or send on to him.”
“Excellent!  I would be delighted to transport any correspondence for either of you,” mentioned Cooper.  He saw the expectant look on Morgan’s face.  “Indeed, I would delight in acting as courier for any and all of you.”
Collapse