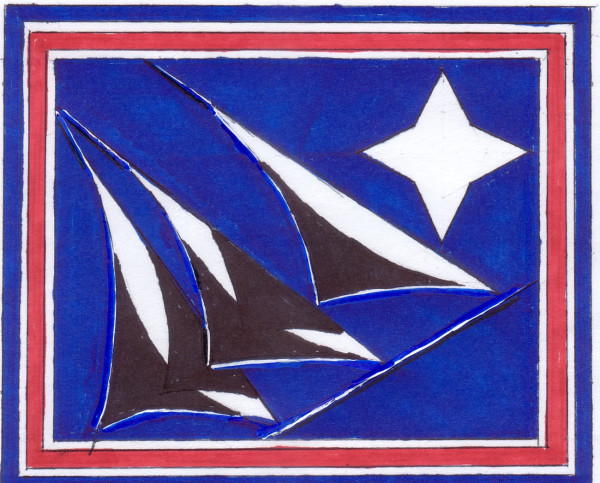 From several years ago... an alternate idea for a business card logo.  Basically a ship's head sails and the four-pointed star that figures into the Stone Island Sea Stories.


The last time I was here, I diverted the train of thought to editng and said one could look at editing from two different vantage points.  Who edits?  and What gets Edited?  So let's take a look at the "who" of editng.

I think the most important people involved in the editing process are the writers themselves.  The writer knows more of what is going on in the story than anyone else, and whether they dig deep into the self-editing process or evaluate and apply suggestions, corrections, or changes, provided by others, their editing inputs are more valid, more authentic than any others.

At the same time, being so deep into the story may cause a writer to be unaware of particular problems.  In the early stages of Beyond the Ocean's Edge, there was a rather extensive flashback sequence.  Somewhere the beginning of a chapter, the story flashed back to the point at the end of the previous chapter, and over the next several chapters, slowly brought the story forward to the point where it had flashed back.   To me, it was simple.  I understood it, probably because I had purposely written it that way.

But one of my early readers mentioned she was having trouble following the story at that point.  I realized I could do three things concerning her confusion.  One, I could ignore it and attribute her confusion to the fact she is a blonde.  Two, I could go through that section of the story and try to emphasize the fact that we had indeed "flashed back." Or, my third choice was to rewrite that section in straight forward, chronological order and eliminate the flashback sequence.  I opted for the latter.  If the flashback confused one person, it would more than likely confuse another.  Would I be able to strengthen the indicators of it being a flashback without it being to much of a strain to the flow of the writing and the story.  Easiest, I thought to just take the flashback aspect out.

That's why it's always a good idea to have other sets of eyes go over one's work.  They might discern problems we would not.  I call those we can get to do this, early readers.  And in my mind I see them as first readers (alpha readers), critique partners/critique group members, or beta readers.  Ideally, any of these should at least give you general feedback on the overall story.  Hopefully an early reader will tell you if the story, or a particular portion of it works... or if it doesn't work.  Hopefully they willl be able to tell you what it is specifically that does or doesn't work.  And they may also point out consistent grammatical, spelling, or composiition problems.  However, we should not expect an early reader to do a full blown edit, finding and correcting every single error or needed change.

I see first (alpha) and beta readers as those who end up reading one's story, primarily because they want to.  Perhaps they've become aware that you are writing or have just written something, ask if they can read it, and you agree.  Or you value their opinion and feed back, ask them to read it and they agree.  (And yes, there are those who will do early reading for a fee.)  In my view, the difference in whether one is a first (alpha) or a beta reader depend upon when they read the work.  I see a first reader reading the first draft or a very early revision, and perhaps helping with ongoing revisions and the polishing process.  To me a beta reader is one who would read a more finished version of the story, perhaps as one prepares to submit to agents, acquistion editors, or is about ready to self-publish.  A beta reader should help the writer verify the work is ready to go on to the next step.

Critique partners/critique group members end up doing much the same, but generally it is in exchange for you reading and critiquing their work.  It may be a one on one exchange with a single individual or a group effort where each reads and critiques work by a number of others.  And of course one's own work will also be critiiqued by the group as a whole.

Once again, I see the efforts of early readers to be more of a general nature, to look at and give a broad feedback to the entire story.

Next time we'll look at those individuals we can actually call editors...
Dave
Collapse