Hello!
Just realized I haven't posted for a while.  Now, if I were to follow the pattern I've established, I'd be posting another installment of "Thoughts on Writing."  But today the mind isn't up to the task so I'll go for another excerpt from the Stone Island Sea Stories.
This brief peek comes from Sailing Dangerous Waters: Another Stone Island Sea Story, Chapter Twelve, "At Sea Again."  In it you will find mention of voting, coincidentally on the day the United States is slated to certify the votes of the Electorial College. 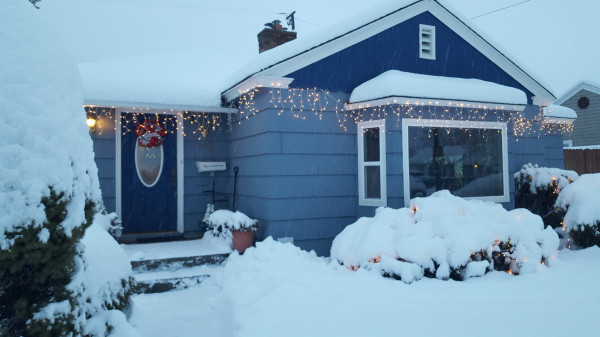 Nothing to do with the post as a whole, but the day prior to New Year's Eve, we had epic amounts of snow.  Warmed up and is nearly all gone now.

(Previously, the schooner, HMS Island Expedition had been in dry dock.  It has just been refloated.)
Even though the crew now berthed aboard the schooner, they were not as self-sufficient as when at sea.  Meals were not prepared aboard, and Pierce and several of the officers still dined at the Colony Building.  As eight bells struck, ending the afternoon watch, Pierce grabbed his hat, shut the door to his cabin and hurried ashore.  He had been active enough throughout the day that his appetite was sharp, whetted by the thought of another of Mrs. Packingham’s delicious suppers.  He looked forward to the well-laid table, convivial conversation, and the usual informality of a meal presided over by Harold Smythe.
That late afternoon found many of Island Expedition’s officers apparently desiring the same thing.  When Pierce arrived at the Colony Building, he heard sounds of conversation, bursts of laughter, and occasional but ineffective calls for quiet and restraint.  It was a happy and even boisterous group that he joined.  Other than those on watch, all of the schooner’s officers were there.  Also seeking the pleasure of the meal and enjoyment of such a good natured company were several of the community’s leaders and other guests of some importance.
( Collapse )
“But surely they are not eligible, sir.  Nor would I think any in His Majesty’s Service, even those at this table would be allowed the privilege.”
“Nonsense, sir!  Vespican citizenship was granted us all.  Specifically it was granted to you to obtain your release.  If any amongst us should have a say in deciding our future, it is you and your crew.  You are as much a part of this colony, this potential eleventh Land, as are the rest of us.”
“True enough, Captain.  Do you forget the advice I offered in Brunswick?”
“That was, Doctor?”
“To regard yourself as a Vespican while here and an Englishman while there.”
“Oh, I do remember, sir.  However, I have always applied it internally, allowing it to guide me past any divided loyalties.”
“But don’t you see, sir,” offered Hadley, glad to be at supper here and not aboard, where tradition demanded he not speak unless addressed by the captain.  “If we are Vespican while here, it is our privilege, even our duty to help decide the colony’s destiny.”
Collapse