Looks like my latest attempt to get back on schedule with posting has failed.  Nonetheless, the only way to get back to it is simply to do it.  So, here's a bit from Chapter Two of Sailing Dangerous Waters: Another Stone Island Sea Story.  The chapter is titled, "Good News." Enjoy! 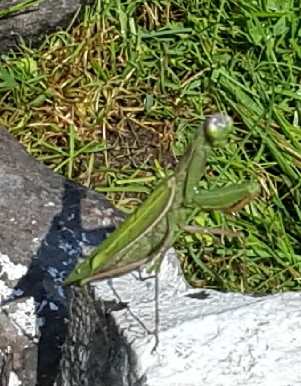 Again, a picture that has nothing to do with The Stone Island Sea Stories or this post.  If you look closely, you may be able to see the praying mantis that spent several minutes sunning herself on one of the rocks I used to build a border about the shubbery in front of our house.  I ended up zooming in on the original pic, saving that and zooming in again.

The conversation drifted.  Moments later they heard a voice from the pier and Andrews respond to it.
Then Andrews turned to his captain.  “Sir,” he said.  “A message from the consulate, and Lord Sutherland would see the captain when most convenient.  The first lieutenant as well, if possible, sir.”
Pierce looked quizzically at his friend.  Hotchkiss’s return glance mirrored the same puzzlement, as never had the Tritonish counsel ever sent for either or both of them, not when they were not physically present at the Consulate.
Pierce must have dwelled on this for some time, for Andrews spoke again.  “Beg pardon, sir.  But the messenger is awaiting a reply to Lord Sutherland.”
“Quite right, Mr. Andrews.  Tell him we will arrive within the hour!”
“Aye aye, sir!”
“Now we have some time, some short time to be spent making ourselves presentable.”
“No, it would not do, half a bucket of slush on my trousers.  But I could never resist helping grease the carronade slides.”
Fifteen minutes later Pierce and Hotchkiss appeared on deck in full dress uniform, polished, shined, and brushed clean and smooth.  “Mr. Andrews, you have the deck, it would seem.  Normal routine, if you please for the remainder of the day!”
“Normal routine it is, sir.  Shall you go ashore with ceremony, sir?”
“I think not, Mr. Andrews.  We’ve the hands busy for once, and would be a shame to break them from it.”
“Aye, sir!”
As they walked along the waterfront, Pierce had to check himself and continue past the Frosty Anchor.  It had become a habit to stop there.  Hotchkiss saw the slight change in pace as his captain recovered.  “I too thought to stop.”
“The place has been a refuge at times.  When we do leave here, the Frosty Anchor is one place I will remember with some affection.”
“As will I,” answered Hotchkiss.  “Would it be His Lordship summons us with news of that event?”
“Deep within my soul, friend, I do hope for that.  But if I was a gambling man, I’d not wager it.”
“Doctor Robertson’s last communiqué was quite optimistic.  Perhaps we can take heart from that.”
“But he said progress was being made, not that any real results were forthcoming.”
“Aye!” sighed Hotchkiss.  “It is nice to think we may soon be away from this place.  As much as we would welcome our departure, I would worry about Mr. Morgan’s heart.”
“I daresay the bond between them grows stronger each day.  It is fortunate that she and her mother have joined him here”
“Indeed, sir,” continued Hotchkiss.  “I believe there is real caring between them.  It’s not the old, ‘girl in every port,’ as said about sailors.  I’ve enjoyed my time with Gisele, as I am sure you have enjoyed yours with…”
“With Leona Jackson?” Pierce finished the thought.  “I catch your drift, Isaac.  And yes I have enjoyed my time with her.”

Obviously, that's what I need... more ambition.
Had a bit of it over the past couple of weeks, but it seems to have faded in the more recent days.  I did get my truck washed, and also installed some window tint film at the top edge of the windshield.  Additionally I reglued the mount and resinstalled the large five segmented Wink mirror.  One of the two mounts was coming loose earlier this summer and I went back to the stock mirror.  Great to have the expanded rear vision again.  I can live with/drive with the standard/stock one, but sure like having the bigger unit.

Last week, the same crew that painted the house last summer came by and repaired our chimney.  We'd had a guy do some work on it a few years ago, but it didn't seem to last, or perhaps he didn't go as far in to it as was needed.  Anyway, they discovered that most of the mortar between the bricks had disappeared.  The question on all our minds was, "how is this thing still standing?"  Anyway they replaced the mortar, rebuilt the upper cap and reinstalled the vent caps over the individual flues.  Looks better and is definitely a lot sturdier.  Should be a while before we have to do anything more with it.  (We had some pretty gusty winds a few days ago and it seemed to hold up just fine.)

A couple months ago I went to get on my Facebook Page and was unable to do so.  Thus I haven't been providing llinks there to posts here.  A day or so ago I tried again and now I can get back to it.  But it seems as if they are changing it somewhat and I'm still trying to learn my way around.  Biggest thing is, I can't find the Pages Feed, where I can see the latests posts on the Pages I've liked as my Page.  I always find interesting things there to post to my Page.  (Nor can I find the list of Pages liked by my Page.)

Noticed that in large, what they are doing is making the desktop version more like the mobile version and I don't know if that's a good thing or not.  Noticed that Twitter did something similar a couple of years ago.  Nice, I suppose for those folks who do most of their social media stuff via phone or tablet, but I always thought the desktop versions were better... for both platforms.  But anyway, I'm back on Facebook, and hopefully as we move forward, I'll post links there to get you to what I post here.  And if you want, you might scroll back through the last several posts here on LJ as some were never linked via Facebook.  There are a few updates to "Thoughts on Writing" and a few more excerpts from the Stone Island Sea Stories.
Dave
Collapse