Here's hoping I'm back into a routine and will be posting "Thoughts on Writing," Excerpts from the Stone Island Sea Stories, and general tidbits on a more regular basis.  Today I should be mowing the lawn, but we have a crew repairing the chimney and I won't be able to get all of the yard done with them here, so I might as well get something posted.

Creatively, when I sit down to write, it might be to get a scene or two on paper (computer) that I'd come up with earlier.  It also might be to continue a scene already started, or to go on to a new scene dictated by what has already happened.  Sometimes there is a lot of forethought in a scene and at other times it is just what comes to mind at the time. 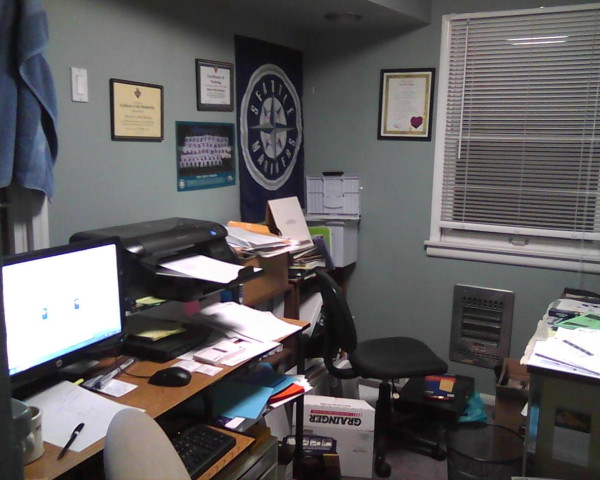 I do my writing at a desktop computer, here in the little room we call, "the office," as seen above.  If I had a lap top, I'd use that.  But I want a real tactile keyboard, one that I can actually type on.  I learned to type half a century or more ago, in the eighth grade, and can to an extent, touch type.  I find the virtual keyboards such as we have on our phones and tablets to be to small and hard to work with compared to a real keyboard.  I end up hitting the wrong key way to easily, especially when I mean to hit the space bar.  I get frustrated with so called "auto-correct" as well.

While there are many forms of software out there for writing, I simply use Microsoft Word, whatever version I happen to have at the time.  Currently, I can open up a new document and with a handful of clicks have it set up so I can write in standard format.  (More on that in the future.)  I also do a separate document for each chapter.  That maybe a result of a bit of experience with computers and word processors when they were in the early stages of development.  Then, memory capacity was very limited, and a document the size of my typical chapter would basically max out the memory.  Then one would need to save it to a disk... the big ones about the size of a salad plate... 8 or 9 inch?  And each disk was good for only a chapter or two.

I've also found it easier only deal with the chapter I'm working on, rather than to open up and scroll through the entire story.  Once everything is at the final edit stage, or when I am ready to send it out to editors or perhaps agents, I'll combine them all into a single document.  But until then, each chapter is a separate document, with all filed in a folder for that particular story/book.

Usually when I sit down for a day's writing session, I'll go back over what i wrote the day before.  The idea is to get a running start, so that when I reach the point where I ended, I can automatically transistion from reading to writing.  I don't edit, per say, but if I see an obvious typo or other blatant error, I'll fix it.  On rare occasion I might decide I'm just not happy with the previous results and will do a bit more of a rewrite/revision to that point.  If memory serves, that happens once or twice per story.

When I sit down to write, my goal is to advance the story by three, four, or five pages.  Depending upon your view of things, your personal writing experience, that may seem like a lot, or it may seem like very little.  However, you should consider this.  If one writes in standard format, which I believe one should, each page is estimated to average 250 words.  If one completes four pages, a good average output for me, that's 1,000 words.  In fact it's probably somewhat more, as a typical page is usually over the estimated 250 words.  So if one completes four pages everyday for three months, one will end up with 90,000 words, more than enough for a full length novel.  Likewlse, if one only wrote a page a day, after a year there would be roughly the same word count.

Next time I hope to look at story lengths.  I also hope to be back to the subject sooner than I was for this post.
Dave
Collapse