Earlier today, I told Eva I was going to be lazy today.  She replied, "You're lazy everyday!"  Suppose I am, but yesterday I mowed the front yard, edged and trimmed via the weed-eater, weed-eated the majority of the back yard, and watered it all.  (The battery on the weed eater went dead before I completed everything so I still have the northeast corner and the raised section to do, but I got the majority of it done.  The back yard is more of a weed patch so we just try to keep it cut down via the weed-eater, rather than mowing.)  Anyway, my ankle has been bothering me lately and by the time I was done with all I did yesterday, plus being out with Coco a couple of times, it was really sore.  My plan for today is to stay off it as much as I can and hope it heals up a little.

I'm not sure what's wrong with it, but it acts almost as if I've sprained it.  Yet I don't remember any specific incident in which I did so.  Just noticed that it seemed a little stiff and sore one day.  Wasn't too bad until last week when I was mowing.  Needed a bit more of a push while going through a tough spot in the yard so I put a little extra into my step, pushed off with a bit more force on that foot, and wow!  Ouch!  Figure that if it doesn't clear up soon I'll need to have it looked at.

Now in the process of inputting my latest edits of Darnahsian Pirates to the computer version of same.  I've done the first four chapters so far.  In the first two, I ended up eliminating around 100 words each, but in three and four, only a handful of words.  These are older chapters, originally written a long time ago, and ones that I've been over several times.  In a way it surprised me that I found so much to change, but I did.

Reading wise, think it might be time to read Patrick O'Brian's "Master and Commander" series again.  Figure that if I do, I'll alternate between those and others.  Read one of the Aubrey/Maturin books and then something else before coming back to the next story about Jack and Stephen. 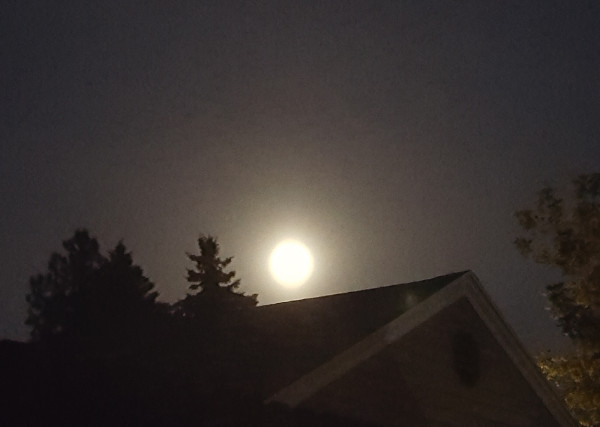 Outside with Coco last night so he could take care of certain neccesities. Got this pic of the moon over the neighbor's roof.  Basically looking to the south east.