Lucky You!
And I'm a day ahead of myself!  Maybe it'll keep up
Still fighting these quarentine blues it seems.  Still at a low as far as ambition goes.  But thinking back, I've had spells like this before and have eventually worked my way out of them.  Feel frustrated in a way, but also realize it just might be normal for me.  And who knows, tomorrow might be the day.  (Today is too far gone to be a possiblility, so...)

If I've done anything at all, I've worked fairly steadily at the current edit on Darnahsian Pirates, the third Stone Island Sea Story.  Right now I'm roughly 3/4 of the way through it.  I'm finding more changes and corrections than I thought I would, and my bet is, that even if I go through it really good a time or two more, a good editor will probably find a lot more stuff to fix.  Even in the earlier chapters, those I've been over a number of times, I'm finding things to change or correct. Most are relatively small, but enough that it will be a chore to incorporate them all into the computer version.  That's okay with me, because my goal is to have it as clean and as error free as possible when published.

For any who have read the earlier stories, you may recall that I often cite a specific day and date for when certain things occur.  As far as I can determine, those days are the day that particular date fell on in the year (early 1800s) in question.  As I wrote the later part of this story I neglected to do that and simply speciflied "the early part of February" for example, or "five weeks later," etc.  But I wonder if the time line in my head matches the real calendar at all, or do I have a portion of the story taking place in the cold of winter when actually it should be summer, and so on.  So a few days ago I looked up the year 1807, which is when a good portion of this story takes place.  Discovered that once we passed this year's Leap Day, this year's calendar matches that years.  So if 19 May of this year is on a Tuesday, 19 May 1807 was also on tuesday.  So, anyway, I'm going to have to go through it and check the dates and look at time spans for various events, etc.  Have a feeling I'll find out that I've sort of compacted things together a bit more than I would like.

We are finally getting a little more rain, and today promises to be an actual rain all day sort of day.  Then I hope we'll get a partially dry day, because with all this rain my yard will need to be mowed again.  I like to cut it fairly often, so I'm just taking a little off the top and not mowing a hayfield.  And with the mower I have, if it gets to thick, it's gets hard to push,and if it's too tall, it just pushes over instead of getting cut.  Anyway, with the rain we've had the past couple of days, and the watering I've been doing, it's looking good. Nice and green!

So I've never been one for taking so called selfies.  Usually end up looking kind of weird.  Weird beyond what the camera has to work with, but now and then I give it a try.  Anyway, took this one a little while ago, and infact just before starting this post.  Probably looking a little shaggy.  I was thinking about getting a haircut just as this Corona Virus stuff went down, and thus haven't had one for a while. 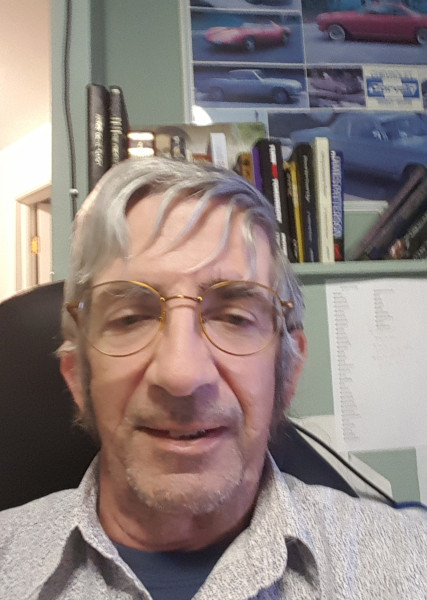 Hope you all are doing well!
Dave
Collapse