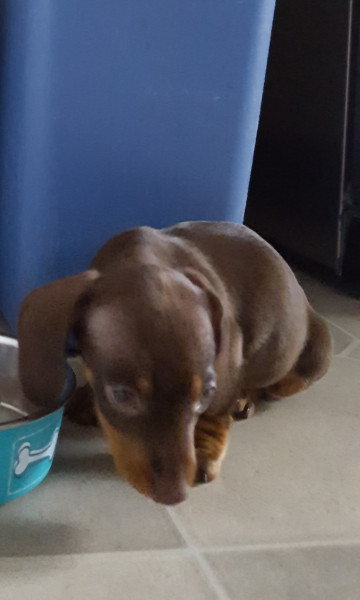 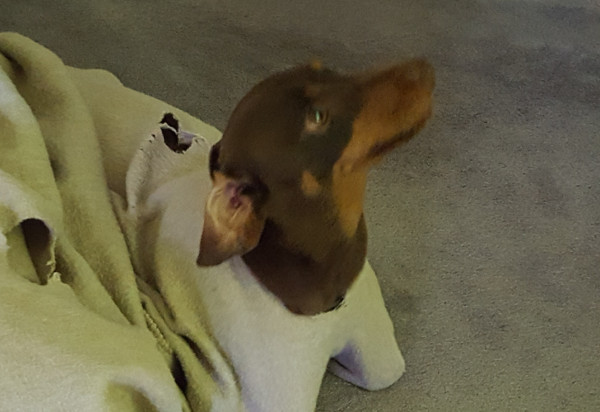 Oldest and most recent pics of Coco.  The first, taken when he had just come to live with us in October or 2017.  He was about eight weeks old. the second was taken a week or so ago.  He's chewed holes in his blanket and was burrowing through it, ending up wearing it.  Honestly, he's helped things stay someone normal around here.

For the last six weeks or more, I've been saying this "Stay Home, Stay Healthy, Stay Safe" hasn't bothered me much.  Afterall, I'm retired and spend much of my time at home anyway.  Even before this all went down I might have only left home, left as in getting in the truck and driving somewhere, once a week or so.  But I was free to do so whenever I chose, and perhaps that fact is playing with my day to day existence.  At least then I could go someplace if I wanted to, see those I needed or wanted to see, and in turn seek the refuge of being at home because I wanted to.  On the surface, it's all about the same, although I try not to go anywhere unless absolutely necessary, and I certainly don't want to catch anything or if I should have it asymptomatically, cause anyone else to suffer from it.

But I've noticed my ambition level is down, not that it was ever that high to start with.  That might be reflected in the fact it's been over a week since I last posted here.  I thought about posting something later last week and just never got around to it.  I've got several projects to work on, both around the house and yard, and on the computer, including some stuff regarding my writing, but usually after I've been on the computer long enough to check e-mail, I say, "That's Enough!" and shut it off.  Usually I have the idea that I'll get to it "tomorrow," but tomorrow ends up the same way.  Honestly, I think it's all on account of this "stay home, stay safe, stay healthy" stuff.

Yet I hope "they don't rush getting back to normal, because I'd hate to see the world relapse and go through it all again, perhaps with even deadlier results.  Then it would take even longer to get back to some semblance of normal.  Llike many, I'm missing sports on TV, particularly Major League Baseball and the Seattle Mariners.  Most evenings or late afternoons would find me watching the game for the day.  Not having sports does give me more time and opportunity to work on my third Stone Island Sea Story, and with many of the regular TV shows I watch being in reruns now, or not even being aired, I have even more time to be at the computer in the evenings.  Still, with the get up and go tank full of nothing but fumes, I don't seem to do as much of that as I'd like.

Yesterday I started another editing pass through the #WIP.  About a quarter of the way through it now, and so far haven't found anything drastic, but have found a few typos and the occasional extra word.  Doing this via the printed copy and a pen, so eventually I'll need to go back on to the computer and enter the changes into the docs there.  Overall, however, I'm pretty happy with the way it looks and reads.

Hoping that one of these days, something in my daily routine rut, will change, and I'll snap out of all this.  Hopefully I'll get back to getting at least a little something done, and my ambition will come closer to matching the list of things I eventually want to do.
Dave
Collapse