Seems like I'm into this once a week posting routine.  Suppose that's not too bad, and let's face it... that's what I apparently do!
Got two newsletters done over the weekend.  First, I got SASP NEWS out for Spokane Authors and Self-Publishers.  It was a bit different this time, as having had no meetings since the beginning of March, a lot of the material just wasn't there.  I did get a nice "From the President" column from the group's president, and our past president also wrote something for it.  She also sent in two book reviews which were included.  In addition, a couple members sent along information about new books they have coming out now or in the near future.  I managed to come up with enough to get a standard length newsletter  sent out to everyone, even if I ended up including a fairly lengthy excerpt from near the end of my latest Stone Island Sea Story.

I usually try to make the newsletter no more than ten total pages, including the cover, as I've found that's the most that will go for a single first class stamp here in the us.  (I fold them over, put seals on the edges and then the stamp and and address label on them before putting them in the mail.)  I'd hoped to have enough material that I'd be forced to include extra postage, but that didn't work out.... maybe next month.  I wasn't too worried about extra postage as most of them go via e-mail.  There is only a couple copies that actually get mailed via USPS.  It's not like the "old days" when it was a full day it seemed, printing and assembling copy after copy and then using up one or more sheets of stamps to get everything mailed.  And if you'd care to see it, it's on the SASP web-site.  Go to "NEWSLETTERS" along the left and select the month.

Also got the May issue of the Rear Engine Review for the Inland Northwest Corvair Club out, with the handful of mailed copies being picked up by the mailman this afternoon.  This group is pretty much the same, and I only need print and actually mail out a handful.  Definitely makes doing a newsletter a lot easier.  Our web-master has had some medical issues over the past few months and hasn't been updating the INCC web-site that often, so I don't don't know if it's up or not.  If you were to check, you might find it still shows the March 2019 issue. 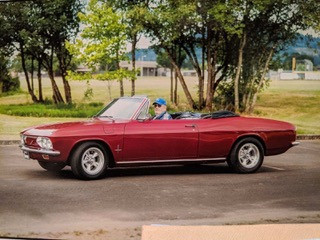 This pic of a Corvair Convertible that's for sale in Oregon also appeared on the front of the May issue of the Rear Engine Review.

For the most part, we've been having some decent spring weather.  Warm during the day, lots of sun, and pleasant.  We've been threatened with rain now and then, but in our particular neighborhood it doesn't seem to rain as much as they forecast or as much as we might expect.  Saturday was supposed to be rain and wind and thunderstorms all afternoon and evening.  We got one good storm just as darkness fell and a bit more near midnight, but nothing that lasted, nothing that soaked everything really good.  So far, I've not put the sprinkler out, but instead have just been hand watering.  Seems to help, especially if I do it everyday.  And since I'm retired and staying home, I've got the time to stand out there and move in slow motion as I let it soak in.  My mantra while watering is, "be the sloth!"  Brought on by the GEICO commerical with the sloth trying to draw a tandem bicycle.  I've found it's best to move the hose and nozzle really slow and let as much water as possible soak into each square inch of lawn.  Also, I've found that as I have the time, it's a good way to, as they say, be one with nature... to just enjoy the typical sunny spring day.

Suppose that'll do it for now.  Expect I'll be back.... in a week or so!
Dave
Collapse