Even though I am of an age that is a greater risk regarding the Corona Virus and also have some health concerns, I'm not all that worried about it.  Most of the time I'm sort of self-isolated anyway... don't leave the house all that much.  Quite often I make my rounds... check mail for Spokane Authors, the Corvair Club, get my beer and snacks and it might be another week before I go anywhere again.  Do get out to walk Coco once or twice a day, but usually I'm home.  What bothers me more is hearing about all the hoarding going on and wondering if any of those necessary supplies will be available when we run out.

Hoping that in the future, in case anything like this happens again, we'll be stocked up a bit more than we were/are now.  Not to say we should have a years supply of everything, but just a bit more than we typically do.  And that doesn't mean buying everything in sight and making it impossible for the next person to have some.  Maybe, if we buy a month's worth of stuff every month, we'd by six weeks worth and then go again a month later and let it build up a little.  I think folks should always have a little extra on hand, just in case.  And if everyone did, then possibly there wouldn't be the mass scramble to get things like there has been. 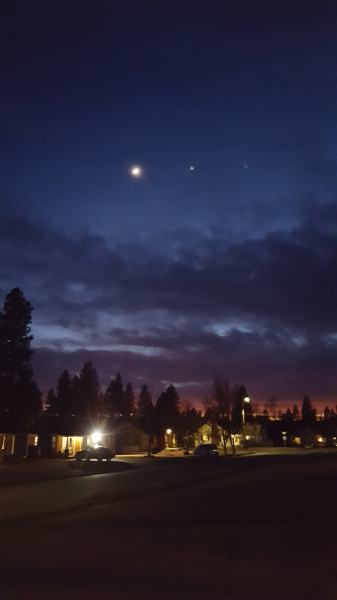 The night sky, taken a month or so ago.

I was scheduled to do some craft fairs to sell books, but they've been cancelled.  One was last Saturday, the day we had snow, and another would have been both Saturday and Sunday at the end of the month.  We've cancelled our April meeting for Spokane Authors... restaurants are shut down now and we may not have a place to meet.  The little coffee club get together our financial advisor puts on each month has also been cancelled.  Really hope the measures being taken work and that a minimum number of folks catch this, and that those that do are not adversely affected by it.

On other things... last night started what should be the final chapter of Darnashsian Pirates, the third Stone Island Sea Story.  It's Chapter Twenty-Seven, and at the end of Twenty Six I was at nearly 116k words.  Figuring it'll top out at 118K or so.  It should decrrease a little once I get into editing and revisions.  The last five (including the final one) are all basically untouched and are real first drafts.  I'll end up going over them and then the whole thing again.  Feels great to be able to see the light at the end of the proverbial tunnel.  Seems like this story has been in work for years... and it has.  Hoping that I'll push on right into the next one(s).

Snow from Saturday is just about all gone.  Still a patch here and there, where it was piled from shoveling and or is in the shade.  Warm enough today that I walked Coco a little while ago with no jacket on.  Saw a few folks out starting yard work, and earlier I'd been in the backyard and used the weed digger tool to uproot some dandelions that were starting to grow.  Figure that in another week or two it'll be time to get started.  Have a lot I'd like to do this spring and summer, providing I can achieve some level of ambition and somehow maintain it.