We've had some fairly warm weather as of late, although at times the wind has made it seem a bit chilly.  Just to remind us that according to the calendar it's still winter, we got a blast of cold starting yesterday.  Snow started falling in the early afternoon and by the time the sun went down it started to stick.
Awoke this am to enough to officially be called snow.  It was still falling and blowing about, with temps well below the freezing mark.  Coco enjoyed his trips outside, but didn't stay to long. 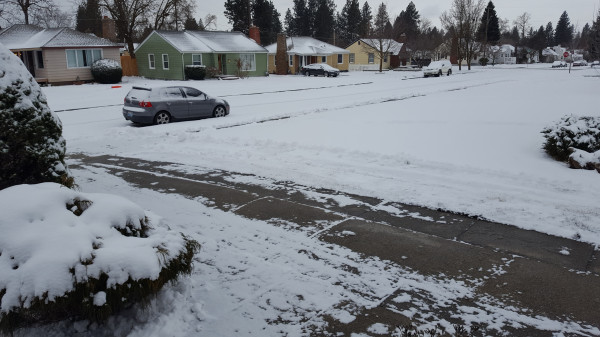 Looking from our front porch at about noon today. I've already "plowed" the driveway.

Then it was time to clean it away from the walks and driveways, etc.  And I think that if I hadn't wanted to try out the new snow removal/snow moving device, I would have just let it go... It's supposed to be back to near normal temperatures in a few days so I doubt it's going to last that long.  But, I have this new wheeled angle the blade, snow shovel/pusher/plow that I wanted to check out.
So, after taking Coco for a bit of a walk, I gave it a try.  For the most part, it works great.  I think the biggest advantage is that I'm simply pushing.  I don't have to bend over to lift and or to throw or toss the snow.  I did learn that if I set the blade straight and go too far, the snow gets to heavy, so I need to angle it to let some slide off as I go.  It can also be a trick to operate on uneven pavement, etc. 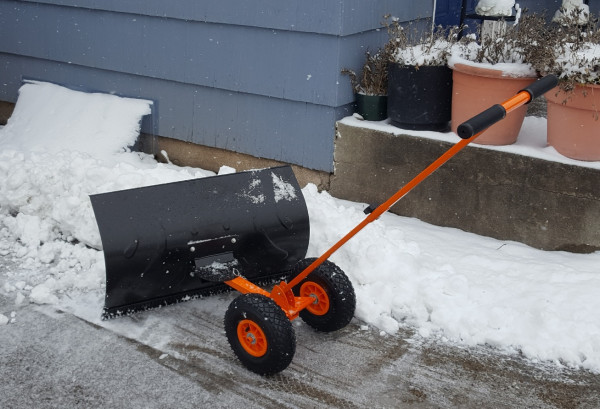 So this is the shovel/pusher/plow I've been talking about.  Don't know if you can see it, but the right hand wheel is an inch or so off the ground.  If I put both wheels down, then the left (leading) corner of the blade is elevated.

I think I'd mentioned the fact that the wheels need to be bigger because the pivot for the blade is not perfectly vertical, resulting in one of the wheels being raised off the ground when the blade is angled.  Turns out that really isn't that big a problem. And there are some places where it doesn't fit, and so I still need to do a little bit with the regular shovel.  Ended up doing the full width of the lower drive way, and the front side walk for two or three houses each side of ours.  Overall, a lot easier and faster than with the conventional shovel.  Think it will come in handy in the years ahead.
Dave
Collapse