It snowed steadily and sometimes heavily all day yesterday, finally letting up around 8 pm if memory serves.  Based on my calculated eyeball, I'd say we got seven or eight inches worth of the white stuff in the local area.  According to the weather people on TV the official snowfall as measured at the airport was seven inches.  I went out and shovelled around 2:30, not long after I posted here.  It was snowing hard enough that by the time I finished, I could do a quick pass over every thing and get more off.  In spite of the depth, it wasn't bad, in my opinion... a nice deep, somewhat fluffy snow fall.  Nevermind that it made a mess out of the evening commute.  One of the local stations preempted regular programiming and ran constant news reports about all the problem areas and sticky situations people were having as they tried to get home. 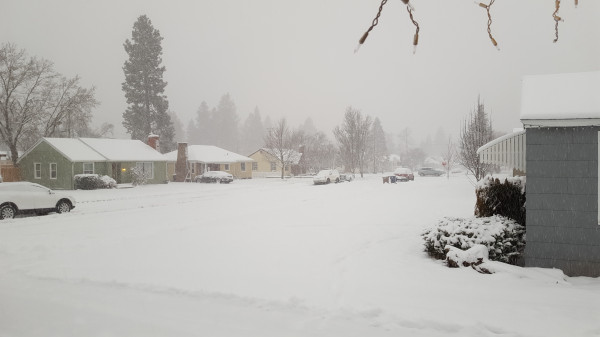 Very similar view to what I posted yesterday, but taken a couple hours later,  I'd already shovelled, but it's hard to see here. North east corner of the back yard, taken around 7:30 last night.  I like the illuminating qualities of a snow fall.

Sometimes it irks me that "they" make such a big deal out of snow.  It is something that occurs every winter and should be considered normal.  But then it seems that so many people have to re-learn how to drive in it if they haven't done so for more than a week or two.  I'm just glad I didn't have to.  Usually I have no problem with the snow and ice... it's the other idiots out there on the road.

Anyway, as so often happens, it warmed up overnight.  Any precipitation that fell arrived in the form of rain, and the existing snow acted like a sponge.  So now, where there as been some traffic on the roads, the pavement may be bare and wet or covered with that winter bugaboo... slush.  And the snow that remains is heavy, wet, and sticky.  Got my excercise shovelling again today.  At least what I had to shovel was only what had fallen since I shovelled yesterday.  Plus that, one of the neighbors did the entire side walk along the street with his snow-blower.  At last report I understand it's supposed to stay fairly warm for the next day or two, with the possiblilty of more rain or snow.  Then as the next week starts it's supposed to get cold.  Personally wish it would have stayed a bit cooler and then gotten cold.  I don't think things would be so messy as they are now.