As far as snow goes, it's been a mild winter so far.  We've had two or three instances of snow, but most of the time it's warmed up and been gone within a day or so.  Maybe  it would last a while longer if piled up from shovelling/plowing and in the shade.  But today we are in for it, as they say.  Started some time after I got up and took Coco out for his morning matter of necessities.  Looks like a couple inches on the ground now, and the weather guessers are saying it's supposed to snow throughout the afternoon and night.  We might end up with half a foot or so.  Usually we get snow and then it gets warm and it all melts.  This time we might have a day or so of somewhat warm temps, but then it's supposed to get cold for a few days.  There are even rumors of overnight temps in the minus degrees F range next week.

Big thing for most folks today is the commute home this evening. Best if everyone just has a bit of patience and take their time.  I was out earlier and it wasn't too bad, but then it wasn't rush hour traffic, and there wasn't nearly as much as there will be this afternoon.

Took this pic out the front door an hour or so ago. 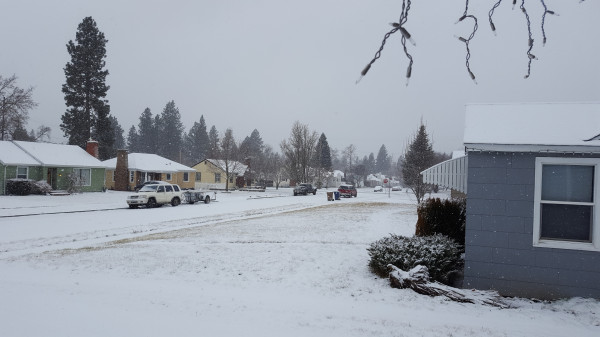 Not much yet as evidenced by the lawns still showing through some.  It's supposed to keep at it all day!