A couple of days ago, someone on Twitter Tweeted about finishing a story and mentioned the number of pages it had and the number of words.  To me, it seemed like a much higher word count than should have been expected with the stated number of pages.  After a bit of Twitter conversation it turned out the manuscript was spaced at 1.15 lines rather than the traditional/standard 2. (double spaced)

Anyway, that got me to thinking, that with so many people self-publishing these days, and with some doing nearly everything, from first draft to final published work, standard format seems to have less importance.  Quite possibly, some writers may not even be aware of it.  Much of what I know, I learned over the years from Anne Mini on her Author! Author! Blog.  I don't think she's posted anything for a few years, but it still has loads of information on traditional publishing and the writing world.  (She posted a few weeks ago to acknowledge some problems with scammers and that some posts are appearing to be in some foreign language.)  Yet if you can get to it, the voluminous blog has tons of information on standard format, querying, pitching, etc.  There is an index or list of catagories, both by date of original posting and by subject.  I find that nearly everything is explained fully and in complete detail,although it might take a bit to wade through it all.

A couple of years ago, I made a presentation to Spokane Authors and Self-Publishers on Standard Manuscript Format, and I include that here.  It's in outline form and hopefully it will translate over when I hit "paste."  I originally included samples, but I don't think they will show as they should,so I'll not place them here.
Dave 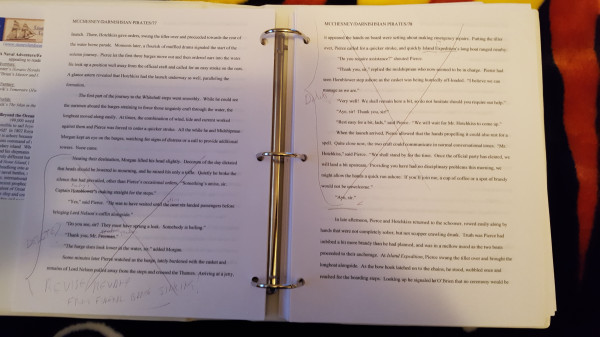 Not quite Standard Format, in that I've printed on both sides of the page and it's been punched to fit in a three-ring binder. Other than that, and the fact I've done some editing on these two pages, this is what standard format should look like.

Well, that's Standard Format as I have come to understand it over the years.  Most is based on what I learned from Anne Mini.  Like so many things in the writing and publishing world, there are variations, contrary opinions, and just plain opposite directives.
Collapse