First of all, HAPPY NEW YEAR! Everybody!  No, that doesn't irk me, but something related to the change in the calendar does.  As the past year drew to a close there seemed to be a lot of hype regarding the ending of the decade.  Best athlete of the decade, best picture, etc.  What no one seems to realize is the decade still has a year, 2020 to go before it ends.

With people alluding to the decade changing last night, sometimes the resulting implications can be shocking.  A few nights ago a local sportscaster mentioned that our local WHL Hockey team, the Spokane Chiefs had played their last home game of the decade.  My immediate thought was, "What happened?  Will there not be a team in 2020?  Is the Arena in need of repairs so they can't play during the year?  Why won't there be any home games until 2021?"  I know he simply meant it had been the last home game of 2019, but...  And today I noticed that even our local newspaper fell into the trap, with a review of the past decade.

Coincidentally the paper had an article about "banned" words.  One I wish would be added is "gifted," as in, "He gifted me his price collection of baseball cards."  Or, "I gifted her grandma's recipe for apple pie."  Better, I think, to say, "He gave me..." or I presented her with..."

Using "gifted" in this way makes me think of some sort of a merchandizing scheme, perhaps a pyramid scheme, where you "gift" something to someone and in return you will be "gifted" ten fold by others, etc.

Now, "gifted" should not be totally eliminated.  It used to mean someone with special abilities or talents... "a gifted artist," for example.  We should go back to using it in these situations instead of a catch all for gave, presented, received, got, etc.

Lastly, why do they put such long shoe laces in shoes?  The pair I have on right now requires that after tying the overhand knot and the bow, I draw the loops out extremely long in order to prevent the free ends from dragging on the floor.  Then I have to triple knot the loops to get them short enough that they don't drag.  True, I have fairly thin feet and probably have more excess shoe lace than a lot of folks.  I don't mind having to tie a single overhand not in the bow, much like we do for kids to keep shoes from coming un tied.  But three or even four, that's ridiculous.  At one time I discovered that if I left the loops of the bow small, I could actually tie a second bow in the laces.  Big problem was they tended to come untied at the most inopportune times. 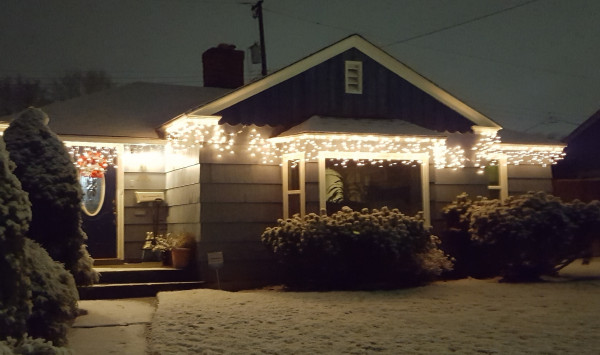 Yes, Christmas Lights are still up.  We usually leave them up well past New Years.  Will eventually disconnect them, but might wait until it's nicer to actually take them down.  I keep saying I'll just leave them up so I don't have to do it again next year.  Anyway, this was taken late in the evening on the day before New Year's Eve... just a bit of snow and more coming down.  We awoke on the last day of the year to a couple inches of heavy wet snow and a temperature that was steadily climbing.  By the time the New Year arrived it was positively balmy.  Today, just traces of snow left.  Once again we've gone through fall, gets colder, winter, it snows, and spring, it warms and melts, all in a one or two day period.  Personally, if it's going to snow, I'd rather see it get and stay cold.  A light powdery snow that doesn't turn to slush in the streets or require extra human strength to shovel is a lot nicer.
Well, enough rambling as we start of the New Year.  Hope everyone had a great celebration and rang in 2020 with a bang!  (Ours was quiet... Eva had worked so went to bed.  I stayed up and watched the ball drop on TV, but that was about it.)
Dave
Collapse