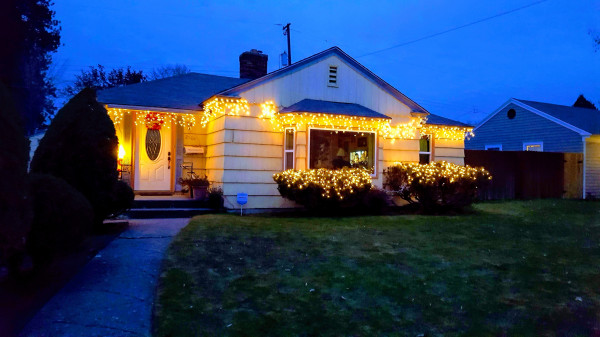 Last year's Christmas lights! Today I put on the one along the roof-line.  Haven't done, not sure if we'll do the ones on the bushes this year.

This was the third Christmas celebrated during Island Expedition’s voyage and the second since their arrival on the island.  For Pierce, it was his first here, having spent the previous year’s feast, amiably detained in Brunswick, New Guernsey.  While he understood perfectly well the effects of being in the Southern Hemisphere, it felt strange to mark the occasion of the Lord’s Birth on a warm and sunny summer’s day.  He held long cherished childhood memories of dampness and cold, perhaps even the fall of snow, and the warmth of family, a roaring fire, and a sumptuous meal inside.
That Tuesday was given over entirely to the Festivities of the Season.  Religious celebrations occupied much of the morning, conducted by the same Vespican Reformed Episcopalian who had led the memorial services for those lost against Hawke.  Pierce attended, not so much out of any spiritual obligation, but out of a sensed social requirement.  Yet it was good to once again hear the familiar story of travelers, a lack of lodging, and the Birth in the Stable.  How remarkable he thought, that even here the story was so remarkably the same.  He noted that a few names, primarily of locations differed, but in all, it was the same story he had heard every year of his early life.
In the afternoon, nearly all of the island’s residents gathered in a large meadow located south of the partially restored village.  It was relatively flat and the grass had been cropped close by the sheep that had recently grazed upon it.  A game of keggers was organized, reminding Pierce somewhat of rounders, that working class version of cricket.  Keggers was the Vespican version of whatever similar contest was played in Kentland.  He was not unfamiliar with the game, having witnessed a few matches while in Brunswick.
( Collapse )

Hope you liked it!
Dave
Collapse