So I ended last month's writing effort two pages short of my goal.  I had 140 pages already in the third Stone Island Sea story when the month began.  I had hoped to double that while paralleling NaNoWriMo, and I came close.  138 pages written, so I'm not complaining at all.  I've slowed down a bit this month, catching my literary breath I suppose.  Don't want to slow down too much, however, as I might end up not writing at all.  That'd be a shame after such a burst of creativity.

We finally got the Christmas/Holiday lights up last week end.  Mostly used what we had so they are just there.  Maybe next year we'll plan it a bit more and make sure we have the type and colors we really want... something that's a bit more coherent and organized. But this is what we've ended up with. 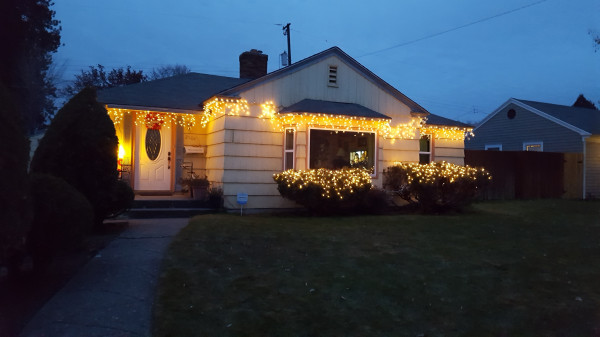 Reading wise, I finished C. S. Forester's Captain Horatio Hornblower: Flying Colors a day or so ago.  Today I started on Commodore Hornblower.  This, by the way is the very first Hornblower book I ever read, and it is the opening pages of this story that got me hooked on the character of Hornblower.  Reading it today brought a lot of under my breath chuckles and memories of previous reads, and of course the recognition of those character attributes that made me a life long fan of  HH.

Christmas tree has been up for over a week now and Coco still hasn't pulled it down.  Mostly he's disinterrested in it, but at times he likes to sit underneath. 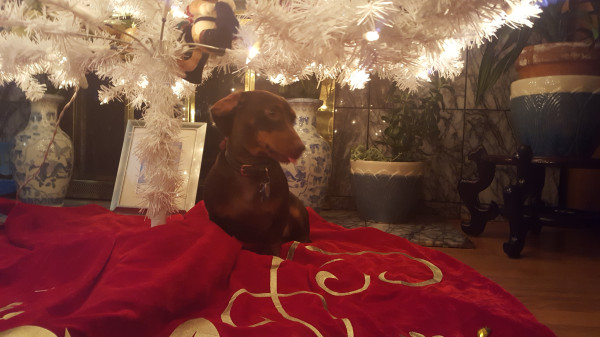 He snoops and sniffs around now and then, but doesn't seem to go wild with it.

That's about it for now.  More next time!
Dave

Posted earlier today and mentioned I'd finished another book in the Hornblower series by Forester.  Anyway, here's the review I wrote of this particular volume several years ago.  (Once again, I do not have a cover image for this book, so I am substituting a picture of a  sky full of "colours.") 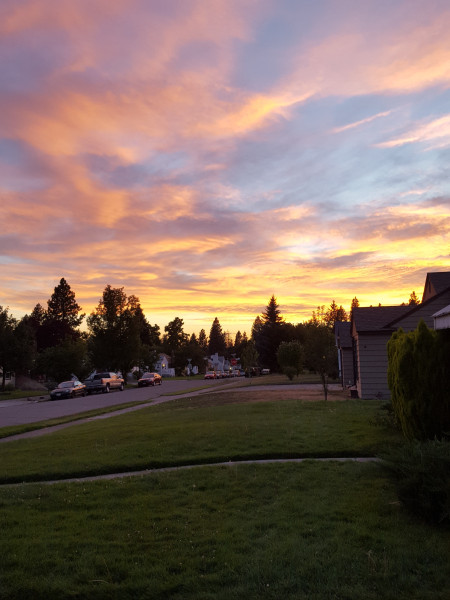 By C. S. Forester
Reviewed by D. Andrew McChesney
C. S. Forester ends the Captain Horatio Hornblower trilogy with Flying Colours.  Now Napoleon’s captive, Hornblower is transported from Spain’s Rosas Bay to Paris so he might be tried and executed for supposedly violating the rules of war.  Accompanied by the severely wounded Lieutenant Bush and Brown, his coxswain, a chance to escape down the river Loire arises during a cold snowy night.  When the river makes kindling of their stolen boat and spills them into the freezing water, immediate self-preservation demands they seek shelter at the nearest inhabited dwelling.  Wills such action mean the loss of their new-found freedom?  Will they be forced to resume the journey to Paris and their inevitable death?
However, good fortune is with Hornblower, as he and his companions find themselves guests of the Comte de Gracey.  The French nobleman and Marie, his widowed daughter-in-law welcome the Englishmen and provide them a place of refuge for the winter.  While Hornblower is anxious to be on his way, weather and the condition of the river demand they wait until spring before continuing their escape.  Besides allowing Lieutenant Bush to heal, a boat to be constructed, and disguises prepared, the delay provides Hornblower an opportunity for friendship and draws him into an illicit romantic encounter.
With the arrival of spring, the three continue their journey to the sea.  At the French coast, Hornblower and his companions re-take Witch of Endor, an English cutter now in French hands.  Fighting through French defenses, the cutter gains the open sea and at last joins up with the British Channel Fleet.  Acquitted of any wrong-doing in having surrendered Sutherland, Hornblower arrives in England to be hailed as a hero.  He is rewarded with a knighthood, other honors, and the realization that finances are no longer an overriding problem.  The triumph of his return is marred by news of the death in childbirth of Maria, his wife, although that pain is eased somewhat by his reunion with the now widowed Lady Barbara.
Once again Forester tells the complex story of a complicated individual in a very simple and straight forward fashion.  Throughout the story Hornblower is obsessed with Lady Barbara and yet feels guilty regarding his distaste for Admiral Leighton, her husband.  It is also plain that he does not love Maria who was expecting a child as he left England.  He reproaches himself with regards to the conception of that child, which on his part took place in a fit of despair at news of Barbara’s pending marriage to Leighton.  Yet, there are indications that had he returned and found Maria alive, he would have continued as her husband, putting aside his desire for Barbara.
Marie adds a bit more complexity to Hornblower’s personal life.  To him, their affair is one of need and convenience.  She is there.  She is willing.  He simply takes advantage of the fact, and true to his character, chastises himself for doing so.
Flying Colours was the third Hornblower book to be written, while in order of his life and career, it stands as number eight.  Once again, the fact that the books were written out of order causes some details to not fall into place.  Once again there is reference to Hornblower having been a lieutenant during the action with Castilla, while when actually described in Hornblower and the Atropos, he is already a post captain.  Near the end of the story, it is mentioned that he has held his present rank of post captain for eleven years.  Based on that and Hornblower and the Hotspur and Hornblower during the Crisis, Flying Colours would have taken place in late 1815 or 1816.  Yet, from information presented in Forester’s own The Hornblower Companion, this story occurred during the winter of 1810 and the spring of 1811.  That would have seen Hornblower advancing to post captaincy in 1800 or so, a time in which other works indicate he was a very junior lieutenant aboard a ship of the line in the West Indies.
As is usual for Forester’s nautical works, there is a discrepancy with regard to technical matters.  Aboard the Witch of Endor, Hornblower mans one of the cutter’s six pounder guns to drive off French guard boats.  At times it is noted that he adjusts the gun’s elevation with the elevating screw, although at that point in history it would have been more likely that proper elevation was achieved by use of a wedge or quoin.
In spite of this technical glitch and the disagreement of facts from those presented in Hornblower stories written later, Flying Colours is a very good and exciting book.  It provides a fitting end to the larger encompassing Captain Horatio Hornblower trilogy, and sets the stage for the stories detailing the remainder of Hornblower’s career.  This part of the overall three part story is glossed over in the 1951 movie starring Gregory Peck.  In no more than ten minutes, Hornblower, Bush, and Brown escape down river, capture the Witch of Endor and sail to England.
Like the previous two books of this trilogy, the copy read for this review is a very early edition and contains copyright dates of 1938 and 1939.  No ISBN or pricing information is available.
Collapse