Here are a couple more reviews from the Spokane Authors and Self-Publishers' files.  It might interest you to note that I won a copy of the first book reviewed at my second ever meeting of SASP.  The author is no longer a member of the organization, but the two reviewers (myself included) are both current and active members.  (Sorry, but I don't have any cover image available to post along with these reviews of this book.)
Stillpoint
By Patricia Campbell Kowal

Reviewed by D. Andrew McChesney
As readers we often prefer a certain author, a certain genre, or a particular theme in our reading.  Many of us are loathe tostep outside of our preconceived and often narrow range of reading opportunities.  As bookstore customers and library browsers, we make many of our decisions based on the cover illustration and title.  It is a shame that we do, for often that story that does not appeal to us at first glance can turn out to be an inspiring and uplifting read.
Such is the case with Stillpoint by Patricia Campbell Kowal.  Because of the title and the cover, my first assumption was that it was probably a little too feminine and a little too self-analytical for my reading tastes.  But, having won a copy of it at my second ever SASP meeting, and having had it graciously autographed by the author, I determined that I would read it, and that I would try to keep an open mind as I did so.
Was I ever wrong regarding my first impressions of the story!  I found it to be a touching and emotionally moving story, nearly a lifelong “biography” of a very likable, believable, and yet fictional character.  The writing itself is clear, concise, and inspiring; qualities that allow the reader to progress steadily through the story without the need to reread or try to guess at the author’s meaning and intent. As with all exceptionally well written stories, I found that I lost track of my surroundings and was physically present, perhaps as a silent observer, in the events unfolding on the page.
Stillpoint encompasses Sam Barsby’s life, from his childhood in Vermont, through a cross country hobo-like train trip during the Great Depression, his military service in the Pacific during the Second World War, and his migration to Australia.  It covers his times of great loss and sadness, as well as his moments of extreme joy and happiness.  The story pivots on that instant in Sam’s life when, with help of a Native Australian, he gently drives away the despair and agony of his suffering and begins to look forward to a continued existence.  This is his Stillpoint, that moment when directions change but there is no movement at all.  It is a rebirth, a renewal, and following this, Sam eventually returns to his boyhood home for one last visit.
Stillpoint is a very well written, uplifting, and inspirational story.  I most strongly urge everyone to read it and to pass it along to others so that they might read it as well.
Stillpoint was published in 2005 through Vantage Press, Inc. and at that time had a cover price of $12.95.  It carries an ISBN of 0-533-14782-4.

Reviewed by James Bartlett Parry
Ms. Kowal skillfully weaves past with present in this intriguing romantic, tragic epic.  Through chapters that alternate time periods, we witness wars and other calamities between brief respites of love and happiness.  All of this happens through the eyes of several generations of the Barsby family.
This style of writing is difficult to pull-off and, in many books, confuses the reader, but Kowal relates her tale in a skillful and seemingly effortless manner that truly makes the story flow.  She masterfully details the ambience of each location and era.
The first page will draw you into Sam’s dreams of flying geese - that eventually take him on an odyssey around the world.  Brace yourself for a plethora of tragedies (but there is, ultimately and thankfully, a happy ending). 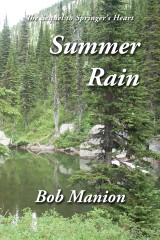 By Bob Manion
Reviewed by D. Andrew McChesney
Sara Bennett is a Smokejumper, earning her living by parachuting out of airplanes to fight forest fires.  On a training and qualification jump she is injured.  While recovering she meets a young doctor that she feels may be the man in her life.  At the same time she is forced out of the Smokejumpers and becomes a Ranger with the Federal Fish and Wildlife Law Enforcement Service.  Here she meets fellow Ranger Randy Springer.  They soon become a team in a number of ways.
On the job, their pursuit of lawbreakers goes way beyond tracking down the occasional poacher or the fisherman with an expired license.  Escaped prisoners, illicit drugs, terrorists, and corruption at the high levels of government make life interesting for Sara and Randy.
This was an interesting and entertaining story, one that was difficult to put down.  It nicely combines action, romance, great characters, with an appreciation of both the wild lands of America with deep respect for those in the Armed Forces and Law Enforcement.  It is a fitting sequel to Manion’s earlier Springer’s Heart.

As I'm sure I've mentioned several times as of late, I'm in the process of reading the Hornblower series by C. S. Forester one more time.  As I'm reading, I'm trying to post reviews I've previously written of those books.  I finished this one a few days ago, so, here is...

Hornblower and the Atropos (I don't have the cover art for this book so I'm substituting one of my sunken ship paintings.  It might be appropriate as they do seek to salvage a fortune in gold from a sunken ship.)

After reading Hornblower during the Crisis, a work which felt unrefined and not quite ready for publication, it was a joy to begin Hornblower and the Atropos.  This book follows the former in terms of Hornblower’s life and career, but it was written at an earlier time.
The beginning presents a rare view of Hornblower as husband and father.  He is accompanied by Maria, expecting their second child, and little Horatio as he journeys via canal to London.  There Hornblower is to take up his first command as a post captain in the Royal Navy.  Despite his sometimes callous treatment, it is apparent that Hornblower has grown quite attached and protective of Maria.  While he seems to relish domestic life, it is clear that the Navy and devotion to duty are at the forefront of his priorities.
Once in London, finally in command of HMS Atropos, and facing the eminent birth of his second child, Hornblower is detailed to organize the water-borne portion of Lord Nelson’s funeral ceremony.  History does not readily provide the name of the individual who actually orchestrated this event, but Forester does well to give the responsibility to Hornblower.  With attention to detail and a sharp fear of failure, the relatively junior post captain succeeds, even when faced with the near sinking of the barge carrying Nelson’s remains.  While quite hilarious in some ways, this incident is another challenge for Hornblower to overcome.
Further endeavors include the capture of a French privateer masquerading as a British trawler, the recovery of treasure from under the noses of the Turkish authorities, and the capture of a large Spanish frigate.  Further complicating Hornblower’s life is the presence of a German prince, a relative of King George III, his Secretary of State, three divers from Ceylon, and a rather unpleasant salvage master.
Hornblower and the Atropos is one of the better books in the saga.  He comes across as a likable and real individual, carrying for his wife and family, dedicated to his duty, and all the while, unsure of his abilities.  As always, Hornblower cannot realize that others, his superiors, see and appreciate those skills.
This book is Forester at his best.  Even so, as with nearly all of the series, certain technical questions arise.  Once again there is the title vessel’s classification.  Quite often Atropos is referred to as a sloop, even though rated at twenty-two guns.  Normally a sloop-of-war carried fourteen, sixteen, or eighteen guns and was captained by a master and commander.  Being a vessel of twenty guns or more, Atropos would have rated a post captain in command and would have been referred to as a “post ship” or a “sixth-rate.”  When Atropos faces Castilla, the latter is described as carrying forty-four eighteen pounder guns.  A typical forty-four gun frigate would have carried that many guns or more, but not all would have fired the same weight of shot.  Twenty-eight or thirty guns firing the nominal weight of shot would have equipped the gun deck.  Weapons mounted on the forecastle and quarterdeck would have been of lighter weight, nine pounders, perhaps, if they were traditional naval guns.  Carronades may well have fired shot heavier than those on the gun deck.
The copy of Hornblower and the Atropos read for this review was published by Back Bay Books in 1999.  ISBN is 0-316-28929-9.  Cover price was at the time of printing, $13.95 US.

So here we are, halfway through the month.  I've manage to get a little something written on Stone Island Sea Story no. 3 on everyday but one, including today.  Actual word count for the month is at 18,381 and I have about 64 pages.  Having actually worked at it for fourteen days, I'm averaging just over four and a half pages a day and 1,313 words a day.  If I stay on pace I should end up completing a touch over 38,000 words by the end of the month.  The overall story is at a shade over 57,000 words and just over 200 pages now. 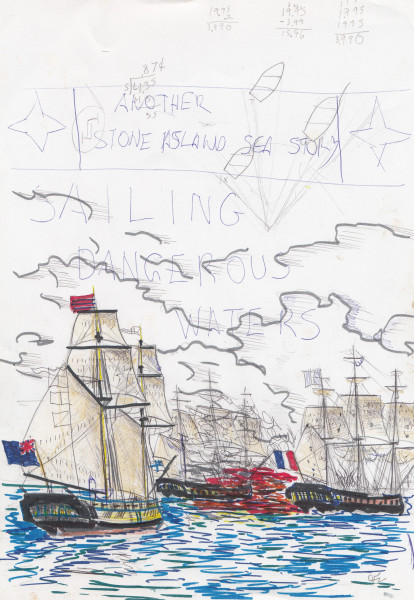 Preliminary sketch or doodle for  "Helm, Steer Between Them," cover art for Sailing Dangerous Waters: Another Stone Island Sea Story (book # 2)
I possibly could be a couple thousand words, a few pages ahead of where I am, but yesterday I decided I needed to make out an "event calendar" covering the time in which these stories take place.  I was starting to lose track of when certain events happened in the earlier stories and I wanted a quick a ready reference for those things.  Don't want some sharp eyed math genius reader to realize they made a voyage via sailing ship half way around the world in three weeks, or something like that.  So laid out a chart on a spread sheet, going from 1801 up to 1812 or so and then skimmed through the first two books to get a basic idea of when certain key points took place.  Hopefully it will help me from being too far off with regards to  times, distances, etc. 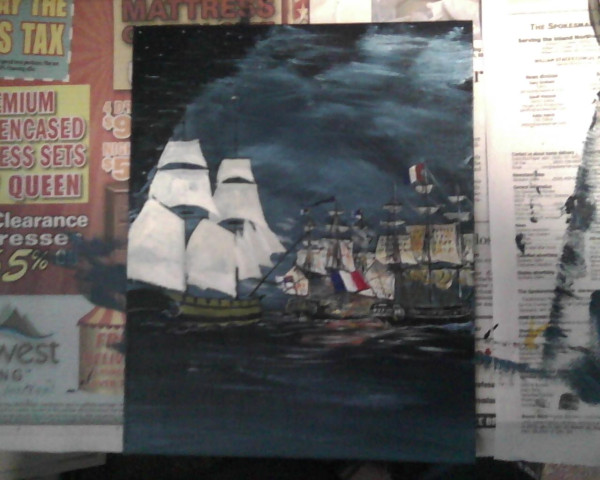 An in progress look at what became the cover art for the second book.
I'm sure I've mentioned now and then that I'm more of a "pantser" or instinctive writer than a plotter, planner, or outliner type.  I don't out line, but I do have a basic plan in my head.  I try to follow it some what, but I'm always open to change as I go along.  It's the stuff I've already written I need to keep track off.  Thus I created a list of characters several years ago.  Sometimes I even use that if I can't remember exactly how I spelled a character's name.  (Is it Newbury or Newberry?)  And everyonce in awhile I remember that a certain character existed and I want to bring him or her back, but don't remember the name at all.  Maybe a sign of growing a little older.  BTW the list of charactors is on the web-site.  I think it's under "RESEARCH" and probably is the only thing there.  It might have or provide a couple spoilers, so beware if you have a problem with them.

So anyway, that's where I'm at with trying to get back into this writing thing.
Dave
Collapse