Posting reviews of a couple more books from the files of Spokane Authors and Self-Publishers. 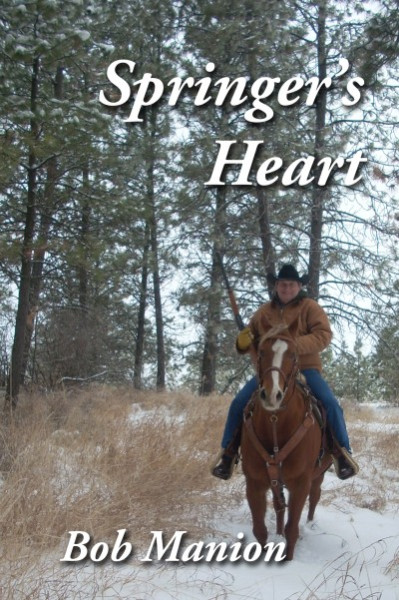 Reviewed by Joyce Caudel
All I ever needed to learn about the Marine Corp I learned in Springer’s Heart.
Marine Sargent Hank Springer loves his life as a Marine but when the love of his life, Lori dies, Hank retires and moves his family to a ranch in Montana. There Hank fills his life with his growing family, orphaned children, ranch hands and the vast land of the beautiful Montana country side. Hanks heart is full of love for all of this but there is still something missing, a hole in his heart until the lovely Bess Clemons comes on the scene.
Springer’s Heart is a story full of adventure and romance. Anyone interested in cowboys, cowgirls, rodeos and all the excitement of a good western romance will love this story.
Reviewed by Jim Harris
I met the author, BOB MANION, three years ago at a writer's conference. This summer, I finally bought a copy of SPRINGER'S HEART (ISBN 978-0978850746, trade paperback, $14.95). From my personal experiences of talking with the author, I knew he was a great storyteller. The book did not let me down. Before I go any further, I have to tell you that based on what the book says its category is "Romance/Western", I would not have purchased the book. I am not a fan of either "romances" or "westerns". SPRINGER'S HEART is mainstream fiction with romantic situations in a western setting (Montana primarily). There are some rodeo scenes thrown in for background that I found to be informative but not boring in the least.
The story begins with a horrific, fatal car crash. Then Hank Springer's life story unfolds with the one great romance of his life. That produces three great kids - two boys and a girl - who turn out to be wonderful adults. Hank serves in the U.S. Marine Corps for over twenty years. When Hank's wife dies of a serious disease, he moves his family to the ranch in Montana owned by his foster parents. The kids grow up and two move away while one son stays behind. Eventually Hank ends up being the foster parent for the three kids orphaned by the fatal car crash in the opening chapter. Total strangers meld into a happy family.
This happy circumstance begins to show cracks when Hank and his son fall in love. And it is a Mother/Daughter combination! Hank adopts another orphan girl who is being stalked by her mother's killers and who raped and nearly killed her. How it all ends makes a wonderful tale. These are characters you will fall in love with. You will find yourself cheering for them in good times and crying with them in bad times. I highly recommend this story for ALL readers. I am happy I did not let the "Romance/Western" keep me away from an inspiring tale. 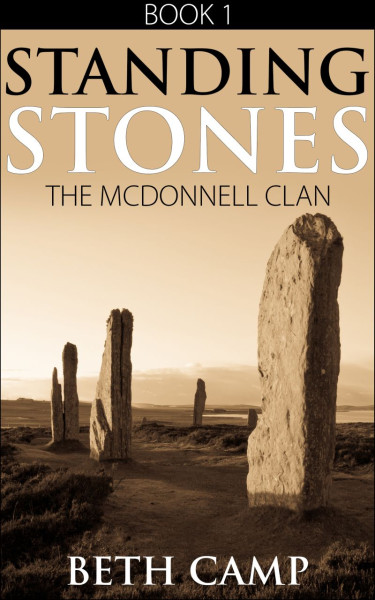 Reviewed by Kate Poitevin
Having recently joined Spokane Authors and Self-Publishers group, my first newsletter told me of the release party for Beth Camp’s new book, Standing Stones.  I went, thinking it was only right to support fellow authors, even if we hadn’t met.
At first glance of the cover, I knew I had to buy it.  Later that day I found myself transported to a time and place I have only ever wondered about.  Being of Celtic descent, I was aware of the Orkney Islands, but had no idea what a hard life the people there lived.  Ms. Camp painted a perfect picture of the day to day life of the wonderful characters she created.  When they are forced from their homes, we follow the McDonnells as they try to find a new life.
This book ends in a way that had me begging for more. I waited, very impatiently, for the second book to be released.
Reviewed by Bob Hildahl
Mac McDonnell and his brother Dougal are both fishermen, trying to make a living off the sea. Mac, his sister, and three brothers live on Foulksay Island in northern Scotland. There they live in a stone cottage owned by Lord Gordon. When Lord Gordon wants to evict small farmers from their homes because he wants to use their land to raise sheep, Mac leads a protest against him. This results in Mac being arrested, the McDonnell's boat confiscated, and the family home destroyed.
Beth Camp is an excellent writer who has created an interesting story with great characters and dialogue. The story is a page turner, which encourages the reader to just keep reading and not stop! Standing Stones is the first book telling the continuing story of the McDonnell clan.
Available as an E-book on Amazon's Kindle and as a Paperback on Create Space.

Here's another one of my reviews of the Hornblower books by Forester.
Hornblower during the Crisis
C. S. Forester
Reviewed by D. Andrew McChesney

Spring 1805 and Hornblower has been promised his post-captaincy by Admiral William Cornwallis.  He turns over command of Hotspur and takes passage to England in the water hoy Princess.  When menaced by an approaching French brig, Hornblower leads the hoy’s crew and embarked passengers in boarding and capturing it.  On board he finds a pack of official papers and upon landing at Plymouth, spirits them to the Admiralty in London.  Because of the nature of those papers, a plan develops, one that may help lead to Nelson’s great victory at Trafalgar later in the year.
Hornblower during the Crisis is the last Hornblower work written by C. S. Forester.  It is approximately one third finished, the author passing away before completing the story.  A single page, based on the author’s notes, describes how the tale was to have concluded.  Of the portion written, it appears to be work in progress, something that would be refined and polished a bit more had time been available.  Hornblower during the Crisis reads as if the author was writing quickly.  Perhaps he was aware of his upcoming demise and desirous of getting a much of the story on paper as possible.  While lacking in length and other qualities readers expect from Forester and the Hornblower tales, this story does fill in a small gap in Hornblower’s career.  It is definitely a “must read” for those looking to understand Hornblower’s life and career to the fullest.
Included within the volume are two short stories.  “Hornblower’s Temptation” takes place aboard HMS Renown, prior to the voyage to the West Indies recounted in Lieutenant Hornblower.  “The Last Encounter” takes place at the twilight of Hornblower’s career.  If one is reading in order of life and career, the first story should be read upon completing Mr. Midshipman Hornblower.  The last should be read after completing every other Hornblower book or story, as it is the final tale.  Both short stories present the more polished work that a reader expects from Forester.  Perhaps the quality stands out a bit more when compared to the rougher aspects of the unfinished work printed in the same volume.
The copy read for this review, ISBN 0-316-28944-2 was published by Back Bay Books of Little, Brown and Company.  It carries a cover price of $13.00 US.

A week into November and I think I can say I truly am, "back on step."  I've been writing on a much more regular basis than I have for the past several years.  So far I've only missed writing on a single day.  That was last Saturday when I spent all day at a local high school's arts and craft fair.  But I did sell three books and also three photo prints of some of my paintings. I started a new chapter, chapter ten to be exact on Thursday the 1st, and finished it up last night.  So far for the month I have about nineteen and a quarter pages and nearly 6k words.  Don't expect I'll hit the NaNoWriMo goal of 50 k, but I should make some real progress.  I'm guessing somewhere around 20 to 25k, give or take a little.

What gets me excited, though, is to realize that I'm thinking about the story, even when I'm not writing, and I'm thinking in more detail about the characters, their interactions, their emotions, as well as the big picture.  And I find that when I sit down to write, that things come to me and I feel more creative and more into the story.  Because I am a "pantser" it's almost as if I want to find out what is going to happen... just as if I were reading it.

So I'm hoping I can keep this enthusiasm and this spirit of creativity going for the month, and that it will continue as the month ends.
Dave
Collapse