Way back when I was still working and when I relocated from the down town Spokane Club to the Spokane Valley Club, I started reading on a regular basis again.  That got me thinking about the book I'd written in high school and I decided to revise, re-write, and make it into something hopefully worth publishing.  That revision process has grown into a multi-book project.  I finished the first two in rather credible time, although it took a bit more to finally decide to self-publish and then do it.  However, as I'm sure I've admitted here from time to time, I've been taking forever to finish the third. 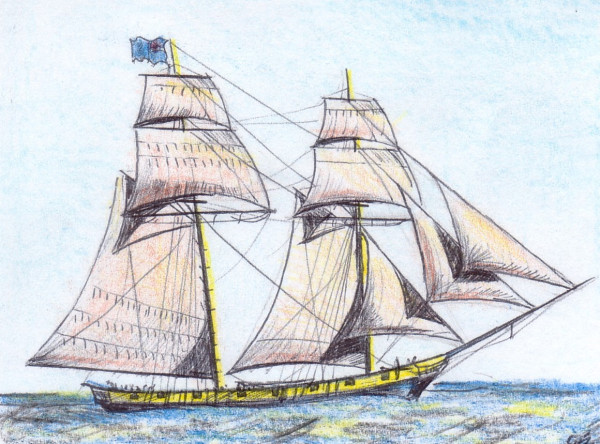 Made this little sketch of Island Expedition way back when.  Used it as the icon on my first business cards and also my first user icon here on LJ.

I thought that once I retired last summer that I would soon be back at it, but that didn't happen.  For one, I discovered that although I ardently looked forward to being retired, there is a big adjustment involved.  After all, from the time I was six years old, I was always in school, in the Navy, or working some job.  I always had someplace to be the next day, or the next week, and even if on vacation, I knew it would end and I would eventually be back studying, on duty, or at work.  And maybe, now that I am a bit older, I don't try to cram as much activity into a single day.  I need a little more down time on a regular basis.

So since I retired I haven't done as much writing (working on the third Stone Island Sea Story) as I would have liked.  I did end up having two surgeries over the past year, and when I got a gut bacterial infection after the first, I didn't want to do much of anything, even to sit at the computer.  And about a year ago, Coco came to live with us.  Two month old puppies need a lot of attention and I found it difficult to try and get anything done.  I couldn't leave the "office" open or he would come in and chew everything to pieces.  If I shut the door I couldn't keep an eye on him and the rest of the house was in danger of being eaten.  And of course I would worry that he'd chew on something bad for him.  Lastly, if I tried to put him in his kennel, he'd cry and there is nothing more distressing than a puppy's crying.  So I didn't do a lot of computer stuff... only what I needed to do, to keep up with the two newsletters I do, and the Spokane Authors and Self-Publishers web-site.

Daughter (Jessica) "photo-shopped" the above to this, sort of my emblem I guess.

For the last few months, however, he has gotten much better and I find myself at the computer more and more.  Yet I didn't seem to be able to get into working on that third book.  Back in August I realized it had been a year since retiring, and I recognized the possibility of needing some adjustment time.  So I made a stab at getting back to writing.  I finished a chapter I'd been on for the last few years and started another.  That attempt sort of fizzled out as well.

A few days ago, the reason why came to me.  I wasn't daydreaming or visualizing, or imagining upcoming scenes and plot points the way I used to.  Oh, I was still letting my mind wander, but I was focusing on other things, some of which might be of importance, and some which might be pure nonsense and completely useless.  When I was working, I used to do a lot of the visualization while at work, especially when I was involved in cleaning tennis courts.  That's a "no-brainer" job, much akin to mowing a lawn.  I only had to push the sweeper unit around and around on the courts and could let most of my mind wander to imagine upcoming scenes and plot sequences for my story.  Then when I got a chance to get on the computer, I could call up the scenes in my memory and write them.  And that was always what I thought was the real creative part of the process.  I'd hear the narration and the dialogue in my head, just as if someone were reading the story to me.  Sometimes I would imagine being an extra unseen being, present at the scene, watching all that went on.

So when I have time to let my mind wander these days, I'm trying to direct it back to the story.  I've managed to get something written three of the past four days, and I feel a need, an urge to keep going.  Anyway, I've finished up the chapter I started in September, and earlier tonight started another.

I know it's November and NANOWRIMO, but I'm not officially participating.  I am going to parallel it, however, and make a conserted effort to write steadily for the month and beyond.  I am hoping to have turned the corner away from some folks would call writers block and to progress at a fairly steady pace to complete this third book.  Then it'll be time to get on with the fourth... and fifth...

Reading wise, just started Hornblower and the Atropos and have read for two different sessions, so I'm still fairly near the beginning.
I might post my review of Lieutenant Hornblower tomorrow.
Dave
Collapse