A few days ago I posted (reposted) my review of Mr. Midshipman Hornblower by C. S. Forester.  As I don't have a copy of or access to cover art for the book, I used a painting of mine that might stand in for a ship featured in another of Forester's works.  Usually when I post here on Live Journal I put a link to the post on my Facebook Page, and when I did for this latest post, I included the following picture...

On Facebook I mentioned there was a story behind this rather crude representation of a two decker/third rate man of war.  There wasn't room or time to offer an explanation then, so I offer it now.  Several years ago, while I was in the midst of writing the first Stone Island Sea Stories, I came across the historical fantasy series by Naomi Novik, featuring Temeraire, His Majesty's Dragon.  In fact, it was Ms. Novik's presence on Live Journal at the time that led me to start my own Live Journal account.  Anyway, in His Majesty's Dragon and the several books that follow, she talks alot about large ships designed to transport dragons, the backbones of nation's Aerial Corps, over long distances.  Using my imagination and experience in serving aboard United States Navy aircraft carriers, I came up with what I thought would be a workable sail-powered vessel capable of carrying dragons over the sea.  In some ways my idea might run counter to what Ms. Novik describes in her books, but I was trying to achieve some balance in terms of sail area/location, deck utilization, and so on.  This is what I came up with.  (2 pics because it's bigger than my scanner.) 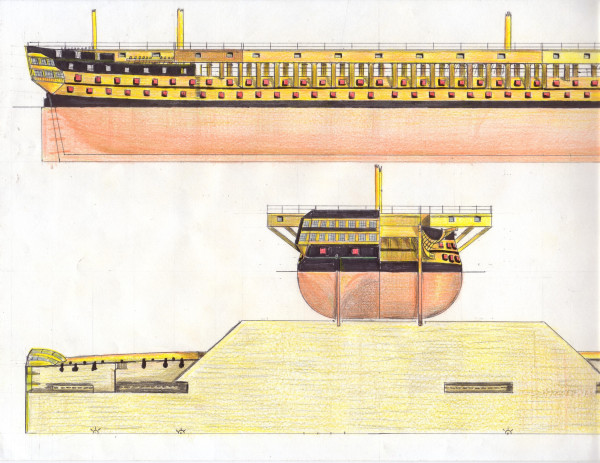 And finally a smaller scaled drawing to show the rig/sail plan of the vessel, complete with a dragon on deck. Any way, the "crude" two decker is a result of mechanically reducing the original drawing to have three instead of four masts, and then a rather primitive attempt at "photo shopping" to remove the dragon deck and the supporting beams.  If it isn't noticeable, the dragon transport's hull is basically that of a third rate, lengthened to double the length and widened to be twice as wide.  Plus, the dragon deck is added as superstructure, supported by numerious heavy beams and timbers.  So now you know.
And thinking of it, I probably could have used the third rate derivative  to represent HMS Justinian, where Hornblower first serves, or it could stand in for HMS Renown when  posting the review of Lieutenant Hornblower.