We are having some great fall weather here in the Inland Northwest.  It's been sunny during the day and clear at night for a good week now.  In the afternoon, temps have been in the mid to high sixties.  Makes it really nice to be outside and to do a bit of yard work and the like.  I'm trying to get shrubs and the like trimmed up, now that we've had a couple of morning frosts.  Want to get them shaped and cut back a little.  Still working on cleaning out underneath them, trying to get rid of twenty or more years of neglect in those areas.  I've got the majority of it done, but keep noticing more to do.  But if I don't get it all, it'll be there for next year, and I've certainly done more already than has ever been done in the past. 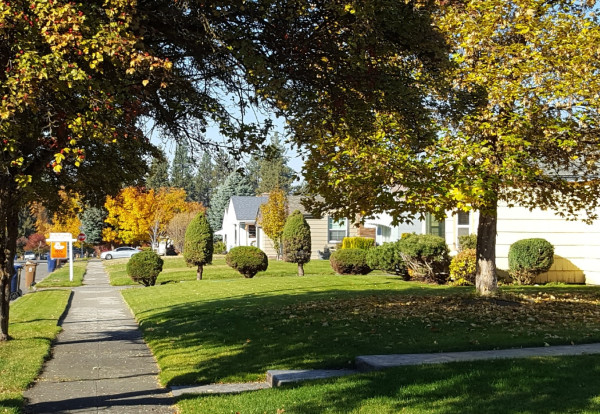 Here you might be able to see how I've tried to clean out under the shrubs and bushes in the front yard.  Fall colors show up well.

A weekend ago, on the 13th to be exact, one of the members of the Inland Northwest Corvair Club once again held a "Cider Fest" at his place in Tum Tum.  That's a ways up the road from Spokane.  That morning was probably the last one in which the weather was anything but near perfect, with a bit of rain and some wind to start the day.  By noon it had pretty much cleared up, although we got a few sprinkles while there.  Neat little event that he sets up... invites friends, neighbors, car club members etc out to his place.  It's sort of a miniature county fair.  Classic cars on display, and samples of fresh-pressed cider, home made wine, etc.  Most folks bring a dish of some kind and he provides barbeque pork and beef, so there is plenty to eat.  And nearly everyone goes home with a jug of cider. One of the Classic Cars on Display. 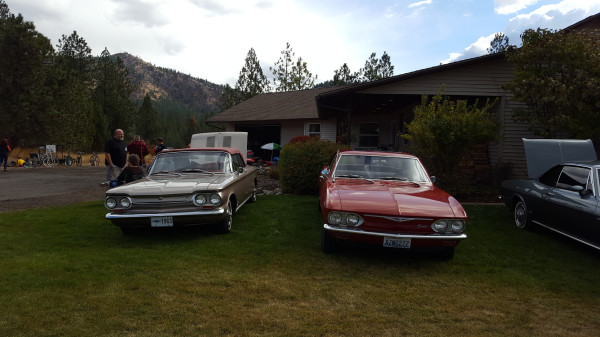 And of course there were several Corvairs displayed as well.

This past Sunday (the 21st) the Corvair Club had another "Tech-n-Tune" over in Coeur d'Alene, at the club president's place.  I'll post a couple of pics the next time around.  (Still need to send from the phone to the computer.)

Today finished reading Hornblower and the Hotspur by C. S. Forester.  This is no doubt the seventh or eighth time I've read it,  going back to when I was in high school and discovered the Hornblower stories.  Looks as if I'm doing another read through/run through of the series.  I've noticed that every time I read the stories I pick up on something new, whether it be in the author's techniques or in the characters themselves and how they are portrayed in the pages.  Imagine I'll continue on with Hornblower During the Crisis.