I say it's weekly, but it seems that doesn't mean a lot.  Sometimes it can be nearly two weeks between posting reviews, and rarely as is the case now, maybe only a couple of days since the last one was put up.  Anyway this is one I just finished for a book I read a month or two ago.
As for my current reading, I today finished Lieutenant Hornblower by C. S. Forester, for probably the tenth or eleventh time in my life.  Looks like I'm in to reading Hornblower again, as I've already pulled Hornblower and the Hotspur from the shelf for my next read.  (I've already reviewed the books in the series.  You can find them on my web-site. Go to "Others" and scroll down.)
The Spy Who Jumped Off the Screen 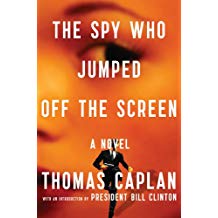 Reviewed by D. Andrew McChesney
Ty Hunter once served in the Special Forces. Today he is a famous movie actor, and his celebrity status allows him to continue working on the nation's security concerns.  He is tasked to track down and recover possibly stolen nuclear warheads.  These special weapons had once been a part of the Soviet Union's strategic arsenal, but with the demise of the USSR, these weapons had been inventoried and secured from possible use by international accord.
But what if one or more of those involved in neutralizing this weapons stockpile had more profitable plans for it?  Surely certain rogue nations and ruthless terrorist organizations would be interested in possessing even a few of these deadly devices.  Ty teams with a member of British Intelligence, the one-time girl friend of the prime suspect and a world-wide group of young computer hackers to uncover the weapons’ hidden location and the complicated  path of the money paying for them.
One claim to fame for this book is the introduction written by President Bill Clinton.  While that is extremely well-written, and no doubt expertly edited, the story itself started slowly.  It was difficult to pick up and read more once it had been set aside.  If one persevered and progressed farther, it became easier to continue reading.  At the end it finally became nearly impossible to put down.  Had this quality existed at the beginning, this might be a superb thriller.  Unfortunately, it is not, even though it ends up being an entertaining read.
Collapse