This book is by one of the members of Spokane Authors and Self-Publishers.  I won it as a door prize a couple of months ago and read it soon afterwards.  I've been meaning to write a review and earlier today that task was completed. Eventually this will be on the SASP web-site and also on my own.
III Minutes To XII: The Last Secrets of the Bible 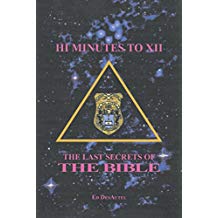 How long ago were Adam and Eve on the Earth?  Where was the Garden of Eden?  What really happened when Cain killed Abel?  Were angels really spiritual beings, or were they aliens from an advanced civilization?  These are some of the questions the author asks and attempts to answer based on his research of the Bible, ancient monuments is South and Central America, and non-canonized texts from long ago.  He also looks at future possibilities as revealed by the research he has done.
This volume fits in with those who believe or suspect the present of aliens from far away worlds in the earliest eras of man’s history on earth.  It also offers something to those who feel there is more to the stories told in Genesis and other Books of the Old Testament.
It does, however take some work to read this book.  There is a lot of repetition of Biblical and other verses, which slows down the process of determining the overall message.  While quoting these passages, the author has parenthetically inserted words or terms to help clarify meanings.  After several repeated insertions, most readers instinctively understand the duality, and additional words or phrases are now distracting.
If we can make it through these obstacles in reading, we find an alternate explanation of early Earth history that makes some sense.  Yet, much of what is suggested does not fit with what science currently tells us to be true.  It is possible of course; that what we think we know is in error, and then all of this would mesh.
The possibilities suggested by this book are fascinating and the author is to be commended for his single-minded dedication and research.  However, the information could have, should have been presented in a much smoother and easier to read fashion.
Collapse