Today I'm breaking with the recent practice of posting reviews on file at Spokane Authors and Self-Publishers.  This is one that I've recently written for a book I read earlier this summer.  (BTW, it is also posted to the SASP web-site as a slightly revised version.  You can find this varient on my web-site.)
How to Write Science Fiction and Fantasy 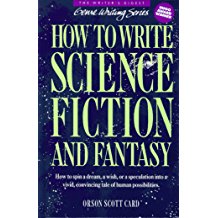 Reviewed by D. Andrew McChesney
I ended up with a copy of this relatively slim work because someone had donated it as a door prize at a local writers group meeting.  As I read a lot of science fiction and fantasy and incorporate it in my own work, I thought it would be interesting to learn what a well-known writer would say about it.
Mr. Card begins by defining the genres, combining the two into speculative fiction while maintaining a sometimes narrow difference between the two.  He also looks at genre as a marketing tool, or as a means of classifying work and what shelf it will go on in the bookstore.  He also looks at science fiction and fantasy standbys such as world building, possible scientific breakthroughs, and the creation of magic.  At this point I was a little miffed as he seemed to dismiss Star Trek’s Warp Drive as being scientifically impossible.
Mr. Card also spends a little time offering advice on getting published.  As the book was published in 1990, some of this might be a bit dated.  He suggests that one seeking traditional publication need not look for a literary agent until offered a publishing contract.  In more recent times one generally needs an agent in order to even approach a publisher.
On the whole, this is an informative and educational work.  I feel that my time in reading it was well-spent.
Collapse