Or a rough accounting of my activities over the past couple of weeks...

Seems that lately all I've been posting has been book reviews.  Maybe that's because I've been somewhat busy and they are fairly easy to post.  I just need to copy and paste them in.

A week ago today, Spokane Authors and Self-Publishers took part in Art at the Market in Liberty Lake.  We had a booth and a number of members provided books.  Friday night, when I was there we only sold a couple, but Saturday, when I was gone, I understand we did quite well.  We limited the number of members who could be there manning the booth because sometimes there can be so many that shoppers/potential buyers get shunted aside.  We had three of Friday night and four on Saturday morning.  We were the only stand with books.  Everything else was various forms of art... paintings, photography, etc. 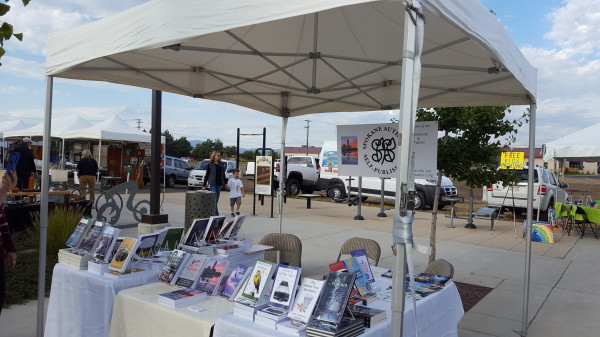 Our booth at Art at the Market, Liberty Lake, Washington on Friday (and Saturday) September 14th and 15th.

I didn't go to Art in the Market on Saturday because I had committed to go to the open car show or Show-n-Shine, a part of Palouse Days in... you guessed it, Palouse, Washington.  It's where I lived and went to school from seventh grade through high school graduation, and going gives me a chance to possibly run into some classmates and friends from way back when.  When I had my Corvair Rampside pick-up, I'd take it and put it in the show.  They don't have any restrictions on what is allowed in the show, so I cleaned up the Frontier and displayed it.  If I'm going to be there all day, why not.  The entry fee is just $10.00 so parking is no problem.  Plus that one gets an event t-shirt and a bunch of other stuff, so it end's up being close to free.  I think there were over 200 vehicles there, ranging from early twentieth century to even newer than mine.  No judging, just peoples choices for several catagories,with all participants having a chance to vote.  And it's a nice drive of a little over an hour to get there, most of it on rural roads. 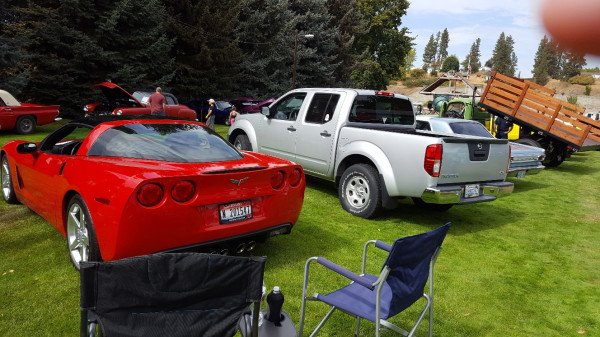 L - R: A newer Corvette, my Frontier, a 60's era Dodge or Chrysler, and a 1946 Chevy truck with dump bed.  Not sure, but I think it won one of the people choice awards.  It had been restored to tip top condition. 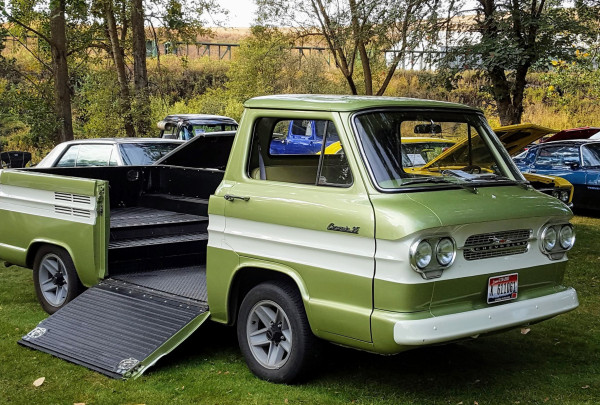 The event was on the calendar for the Inland Northwest Corvair Club and Craig Nicol came down from Coeur d'Alene with his '61 Rampside.  It's like the one I had, only looks a lot better and is a model year older.  Evident why it's called a Rampside! 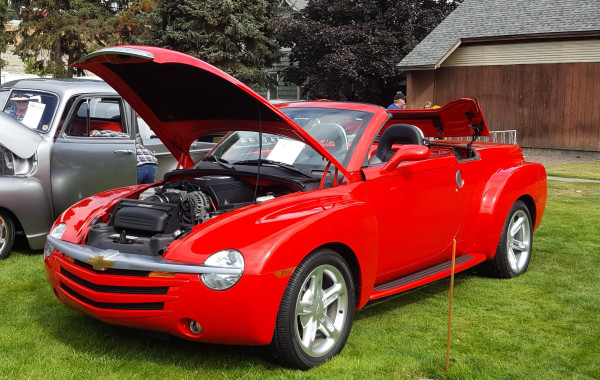 Another member of the Inland Northwest Corvair Club, Bob Phelps, was there with his Chevy SSR pick-up.  Had hoped a few more members would have showed up and brought more Corvairs.

Today we took some stuff to Good Will, including four dining room chairs that we'd replaced.  Had them in the back of the truck and for some reason took the below pic.  Figure I could title it... "When the Crew-cab" isn't big enough for the Crew."  (Good Will wouldn't take the chairs as the tops all come out of the base when you try to pick them up.  They are like office chairs, with casters, elevation and swivel functions. 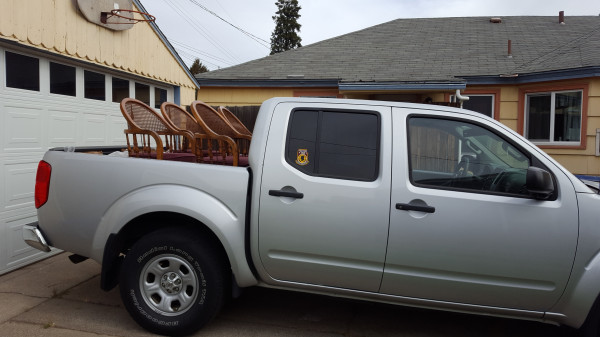 Chairs loaded and ready to go... but they got a return trip as well.

Finished up The Spy Who Jumped From the Screen a couple of days ago.  Decided it was time to read some Hornblower again so I'm about a quarter of the way through Mr. Midshipman Hornblower.  My hope is that reading Hornblower will, as it has in the past, put me in more of a mood to work on my own Stone Island Sea Stories.

Friday and the Mariners will be on shortly.  Time to get the pizza in the oven and have a couple of brews.
Dave
Collapse