Here are the combined reviews of a couple more books from the files of Spokane Authors and Self-Publishers.
Return from Armageddon 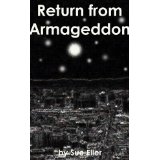 Reviewed by D. Andrew McChesney
In the not too distant future, all of Earth is united as the Federation of United Countries and United Peoples.  Realizing the possibility of invasion from space, Becky Johnson designs a defense system to protect the planet.  On her way to the initial activation of the system, Becky disappears and earth-changing events begin to occur.
This small book, which can be read in a fraction of the time required for most, packs an amazing story into a relatively small package.  There is an understated but noted parallel with Biblical history and prophecy.  Many characters appear to be modern versions of those from Scripture, identified in the story by more modern contemporary names.
The author does a marvelous job of combining Science Fiction with Biblical history and prophecy, while stirring in a bit of sarcastic humor and irony.  The final result is certainly plausible, although not what we are led to expect by traditional interpretations.
Return to Armageddon, ISBN 9781477655726 is available on Amazon, both in paperback and Kindle formats.

Mr. McChesney already said it all better than I could.  I would add that it could have been longer.  It is nice to read a book that doesn't take a month to read, but I wanted more of this future world.  Perhaps there will be a sequel someday, to let us know how her version of the world turns out.  Perhaps Becky and David's grandchildren? 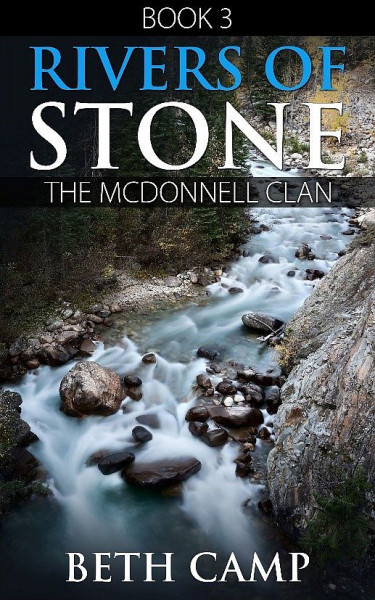 Catriona McDonnel's greatest fear is deportation back to Scotland, where she would never see her beloved husband, Dougal, again.
Beth Camp brought me so completely into the story of Catriona and her trek across the continent, that I found myself shivering and hungry. Her descriptions of the characters' experiences and feelings, of life in the primitive areas of Canada and the northern United States, and the hardships explorers and settlers endured, draw the reader into the story as few writers can. If you enjoy historical fiction, adventure, and a quest driven by love and hope, you will enjoy Rivers of Stone.

In her third McDonnell novel, RIVERS OF STONE, Beth Camp tells the story of a new bride, Catriona, who declines traveling to the Americas’ east coast with her family as an indentured servant. Instead, she chooses to sail to the Americas on the Hudson’s Bay Co. ship, Prince Rupert, as a hired-on-hand—disguised as Cat, her husband’s brother. They dock at Hudson’s Bay fort, York in September 1842
When Catriona’s husband, Dougal, and his younger brother, Colin, are sent west with a brigade, Catriona/Cat stays behind at York, working as clerk and copier. Losing her advocates and protectors, she constantly looks over her shoulder in fear of someone discovering her deception. Nor only here, but throughout the novel, the reader feels Catriona’s deep anxiety about the pretense, about sleeping in the same room with unwashed men and how she endures the severe winter climate in northern Canada.
Catriona/Cat acquires strength and stamina of a young man, and picks up the fort’s lingo. Yet the reader gets a chance to know her as a woman when she shows her true female feelings in secluded places. When Dougal doesn’t return in a year, like he promised, she desperately tries to hide her fear of abandonment. Later, when Dougal’s letters stop, Catriona grieves in solitude.    Then she buckles- up and joins a brigade going to Vancouver in search of Dougal. The reader is intimately involved with the young woman as she— struggles in her four year search— endures the  blizzards, floods  and treks over the Canadian Rockies beside rough-tough furmen, buffalo hunters, scoundrels, breeds and friends .
Rivers of Stone is an interesting read. Compliments to Beth on the thorough bibliography she provided, as well as how she kept the narrator -third–person-direct throughout the novel. I would have liked to have followed a map of Catriona’s journey

In Scotland, in the first half of the nineteenth century, countless farmers were forced off their land so wealthy landowners could devote the countryside to pasturing sheep.  As a result of this forced upheaval, Catriona McDonnell, her husband Dougal, and his brother Colin hire on with the Hudson’s Bay Company.  Known as Cat, she disguises herself as a boy and pretends to be a third brother.
Once arriving at York Factory on the icy shores of Hudson’s Bay, she is soon put to work as a clerk in the trading post.  Soon Dougal is sent to Fort Vancouver while she is forced to remain behind.  Not only must she cope with her husband being away, she must maintain her identity as a boy, lest she be sent back to Britain.  This then is the story of her trials over the next several years.  During this time she makes friends, enemies, and nearly gives up hope of ever being reunited with Dougal.
Extremely well written, Rivers of Stone excels in authentic detail of the time.  The suspense as Cat maintains her masquerade and her longing for Dougal continues at a high level throughout the story. Also notable is her willingness to make friends with, and to be friended by those of other origins, including members of the Cree Nation.
This is an entertaining, informative, and absorbing read.  It is Book Three in the story of The McDonnell Clan, but it need not be read in sequence with the first two volumes.  It is truly a stand-alone work, and its quality should convince readers they need to read the other stories in the series as well.
Collapse