Coco has been with us for nearly eleven months now.  Since the day he came to live with us he's had his fair share, maybe more than his fair share of doggy toys.  He can be rough on them, chewing until we think his teeth would be sore and his mouth aching from the exertion.  Many have worn out or fallen apart and we've had to take them away from him and place them in the trash.  A few, while cute, were so poorly made that they lasted only for a day or so.  And we are careful to get rid of those that disinigrate as we don't want him eating/consuming things that might be physically bad for him.

But a couple items have survived since he first arrived.  One is his puppy dog, a little stuffed toy that looks a bit like a doggy, and a little blue blanket.  We used to wrap him up in the blanket and hold him.  Both still exist, and he still plays with them.  And he knows what is what.  You can tell him, "Get your puppy!" and he'll run and find it and bring it to you.  Typically he will put it in your hand, but he won't actually let you have it.  He wants to play tug of war with you, using that particular toy or item.  He also has a lot of fun with plastic bottles, chasing them around the floor as he tries to catch hold of them.  Now days, however, he quickly chews holes in them and we worry that he might swallow some of the chunks he breaks off.  Some only last for a few minutes. 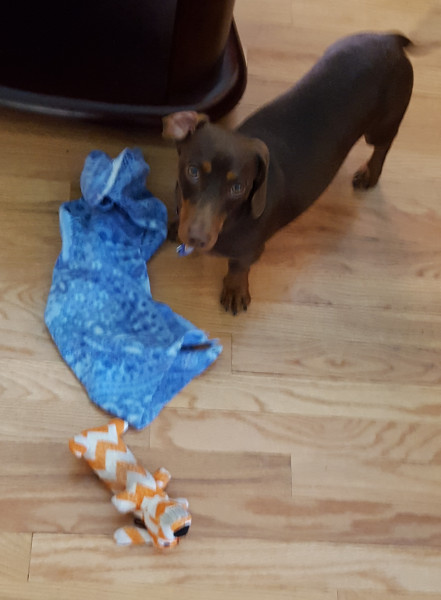 So yesterday I managed to find Coco together with his original blanket and his puppy-dog stuffed toy.  Also remembered that I have a phone with a camera, hence the above pic.  Notice that his ever wagging tail shows up as a blur! 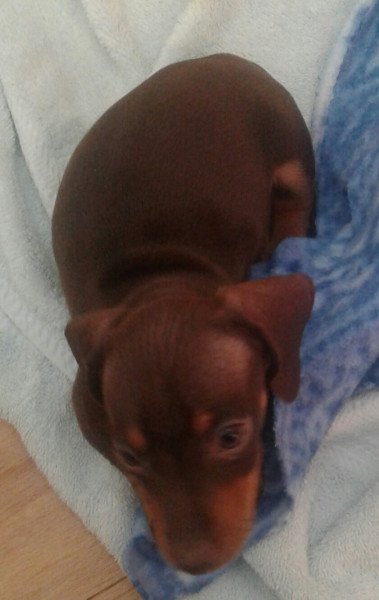 This was taken Oct 24 of last year, less than a week after his arrival.  He's snuggling with that same little blue blanket.
Dave
Collapse