Actually I have combined reviews for two books to post today.  One has just one short review which is why I'm doing two.  Once again these are from the Spokane Authors and Self-Publishers' files.  I have a couple of reviews to write and when I do I'll get them poste here as well.
Dave 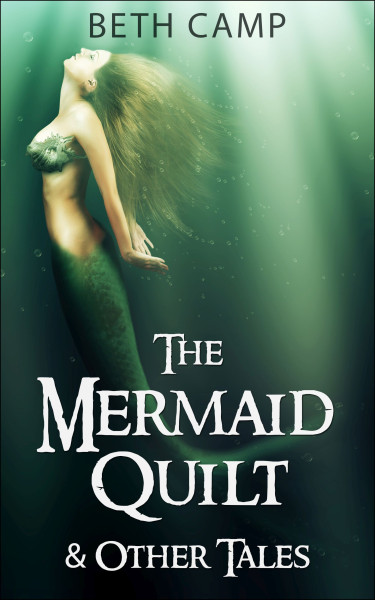 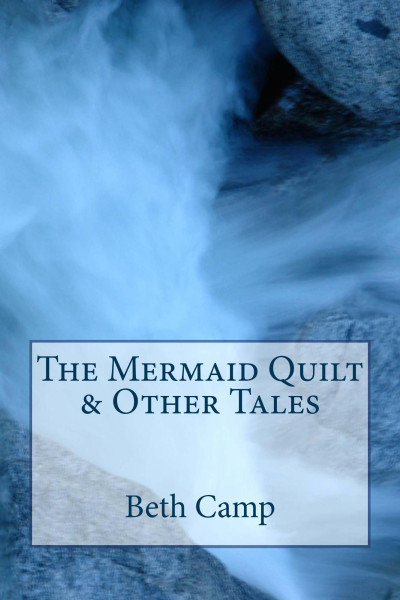 Reviewed by Sue Eller
A collection of short stories and poems centered around the myths and legends of mermaids, The Mermaid Quilt and Other Tales will entertain and delight the reader. Some of them are poignant, some a bit scary, but all will leave the reader with a sense of the magical world under the sea. A good book to pick up for a quick break, since each story or poem is a stand-alone piece, although once I started reading, it was hard to put down.
The Mermaid Quilt and Other Tales is available at Amazon.com and CreateSpace in paperback and on Kindle and Smashwords in e-book format, or through the author. 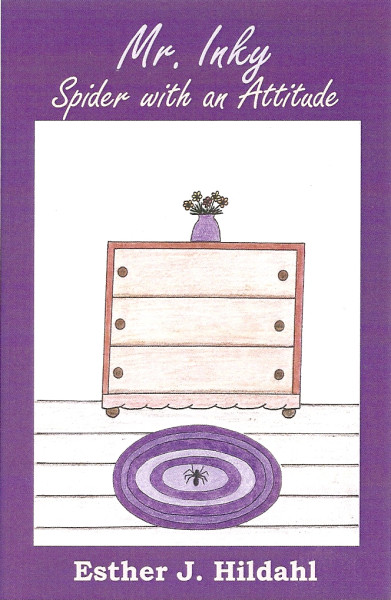 I must admit that I spent most of my life terrified of spiders. I never killed them, I just jumped on a chair and yelled for someone else to come and do the deed. At some point, well into my adult years, I realized their worth and turned to ‘catch and release’: much to the dismay of my grandchildren.
Now that I have read Mr. Inky, I’m so glad that I don’t have the blood of innocent crawly creatures on my hands.
Ms. Hildahl tells a delightful tale about the budding relationship between ten year old Victoria and her unexpected ‘roommate.’ But wait, it’s not just about that! Hidden in the story are lessons about things like not judging others who are different, there just might be a wonderful friend inside. It addresses the topic of bullying, and teachers and parents not really listening to their children and how it makes the child feel. It touches on the angst of the everyday fifth-grader in a touching and respectful way. There is even a stinky brother, (a subject dear to my heart, having one of my own). It is full of great characters, found in every school, and artfully woven into the tale.
It is a perfect read for fifth and sixth graders and this grandma can attest to the fact that it is fun to read to younger ones. I’m sure that the lives of countless creepy-crawlies will be saved as the children learn that all creatures have a place in our world and should be left to do their jobs.

The last thing 10-year-old Victoria Wyatt wanted to find in her bedroom was a spider. How did Victoria go from wanting to squish it with her flip-flop to wanting to protect it against the classroom bully? Author Esther Hildahl spins a tale of a most unlikely friendship and leaves the reader with a whole new perspective on spiders – especially talking ones. A delightful chapter book that I highly recommend to children of all ages. Mr. Inky, Spider with an Attitude is available at the Hastings Book Stores in Spokane, Washington and at Auntie’s Bookstore, also in Spokane.

Vicki Wyatt is a normal ten year old except for the fact she shares her bedroom with a spider. A spider that talks!
Vicki tells her family the spider talks, of course, they do not believe her. She must be imagining things. Vicki’s brother, Neal, teases her and tells some of the boys at school about Vicki’s ‘talking spider’. Vicki gets into a fight on the playground, with the meanest kid in school. They both get sent to the principal.
The real excitement begins when Mr. Inky agrees to go to school, in a glass jar, for Vicki’s science project. Since no one believes her, she tells the class her spider is just an ordinary house spider. The meanest kid in school calls Vicki a liar. Mr. Inky can’t help himself and with a booming voice lets the class know he is really a talking spider. Mr. Inky escapes and chaos breaks out as the whole school searches for him.
I found Mr. Inky: Spider with an Attitude by Esther J. Hildahl to be a delightful story any child will love to read or have read to them. The characters seemed very real to me and brought back memories of my childhood on the playground.  I’m going to think twice before squashing another spider.

Vicky Wyatt’s reaction when she sees a spider in her room is natural.  She’s going to kill it.  However, this spider is unusual and in order to save his live, reveals to Vicky that he can talk.  His gamble pays off and he is spared.  Mr. Inky, as he is later named develops a sometimes cantankerous relationship with Vicky.
Larger problems result for the fifth grader because no one believes her story about a talking spider.  She eventually has to see the school counselor and in an attempt to calm things down says she made the whole thing up.  But when she takes Mr. Inky to school for a science project, things get out of hand and Mr. Inky is forced to speak in front of the entire class in order to protect Vicky.
This was a fun read, a book that while written for elementary school age readers, is entertaining for those of any age.  Most notable is the way in which the author captures the feel of being in the fifth grade.  That brought back a number of memories, and in itself recommends this book for all.
Mr. Inky: Spider with an Attitude is available in several Spokane area bookstores.

Well, I was only two days past in posting a book review every week... the entry previous to this one.  Surprising how time slips by, even when I'm retired now and should have plenty of it.

Biggest news around here is that Coco celebrated his first Birthday on Thursday.  Or more to the point we at least mentioned it to each other and he just took it all in stride... another day for him and that was it.  Yesterday I took him to the pet store to get his nails/claws trimmed.  What a pampered pooch!  Saw the trainer that worked with him a month or so ago as he went to basic adult dog training.  And of course he loves going to places like that because he gets to meet people and most of them make a fuss over him.  I did remember to get a couple of pics of him that day. 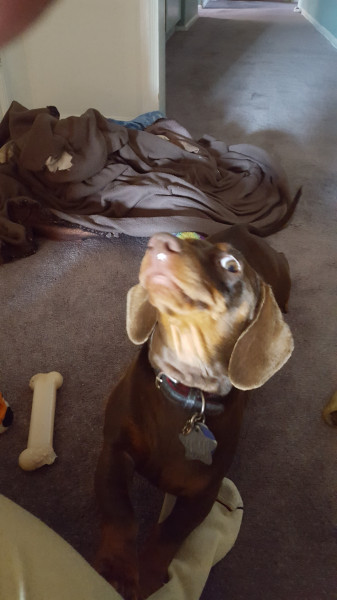 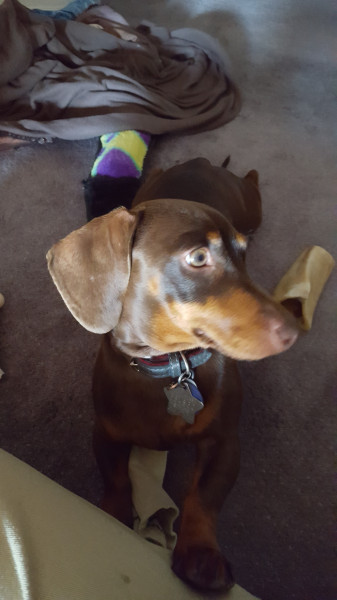 I like the "attitude" in the one on the left!
He also likes to take the "nyla bone seen here or the real bone in the r/h pic and scoot around on the hardwood floor in the living room.  Stands on it with his front feet and goes all over the place.  Wondering what he'd do with a small skateboard or something similar.

Have to some extend gotten back into the writing routine.  Must confess that I'm not writing everyday, but I am getting to it on a regular basis, every third day or so.  Busy right now with trying to get out the two newsletters I do every month.  Finished up and sent of SASP NEWS yesterday.  Over the next day or so I'll need to put together the next issue of the REAR ENGINE REVIEW.  The first is for Spokane Authors and Self-Publishers, and if you want to see it is now up on the web-site.  The second is for the Inland Northwest Corvair Club and once I send it out should appear on the web-site in a bit.  I don't do that web-site so I can't predict just when the web-master will get stuff posted.  Right now I believe the August issue is available on the site.

I'm still reading The Spy Who Jumped Off The Screen by Thomas Caplan.  It's getting interesting and all in all is very well written.  I did think that it started a bit slowly, however.  Currently I'm about half-way through it.

Today was a fairly slow day, although I did get the front yard mowed.  Normally wouldn't have done that until Monday but it's growing good and if it gets too tall it's harder to push the mower.  Especially if I have the deflector set to shoot clippings ahead to be re-cut.  Tomorrow I'll do a bit of trimming and edging and then it should be good for another few days.  (Usually trim and edge every other time I mow.)  I've also been doing a bit with trying to clean out under some of the shrubs and bushes.  Seems like one trims or prunes the tops and sides but forgets the underside of them.  Lots of old lopped off branches and stems down there, so I'm trying to get most of that eliminated.

Now it's about time to get a bite to eat and then watch tonight's Seattle Mariners game.  Crossing my fingers they can get on a roll and make it to the playoffs and post season play.