So yesterday the smoke did not clear up as the afternoon wore on.  According to the television news our air quality entered the hazardous region and we have been advised to remain indoors as much as possible.  Earlier this morning I found the latest reading via my phone and the number shown was considerably higher than what was quoted last evening.  When I checked a little while ago it had come down quite a bit and was comparable to yesterday's numbers.  We have a bit of a wind now and should have it into the evening.  Hopefully that will stir stuff up and move some of the smoke out of here.

Theoretically we have clear skies, but because of the smoke it's more like one of those high clouds/overcast days.  Biggest difference is that if we can make out the sun it has a reddish tint whereas if it were just water droplets in the air, it would be a light yellow or even a whitish appearing light. 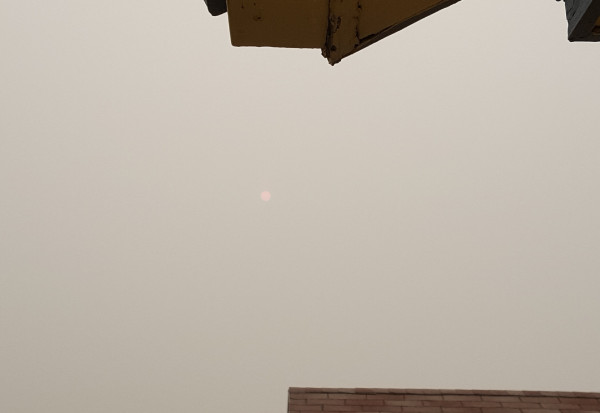 Took this last evening around 6 pm, looking west from the porch.  Yes, that's the sun you can barely see in the center.  In real life it was really red.

Odd, though that will all the free time I seem to have... not wanting to be out in the smoke, and with all the time available for the computer, I don't seem to have much if any ambition for a lot of the stuff I could be doing.  I'm pretty much into a "check e-mail, check social media stuff" mode.  Have some stuff to post to the SASP web-site, and should make a bit of progress on the WIP, but...

So if the wind keeps up and clears a good portion of the smoke out of here, I might try to take Coco for his walk later today.  We didn't go this morning because of the poor air quality.  Also it should stay fairly cool today so if the air clears I might get a chance to mow the yard.  It just depends.  If not today, hopefully would be able to do so in the morning.  Again, as long as the smoke has cleared and remains clear.

That's it for now.
Dave
Collapse