Yesterday I had it planned that after Coco and I went for a walk, I'd mow the front yard and then do the hand watering.  But our layer of smoke has returned with such a vengance that I don't want to be out in it for anything more than necessary.  Even our walk this morning was a lot shorter than it usually is.  Our house is in the middle of the block and so we walked up to one corner, came back, snooped around our yard and a bit later went up to the other corner and back.  He was ready to come in, so we did.  Usually we try to go around the block... actually around two or three blocks and get a good walk in.  Just no way we were going to do that today. 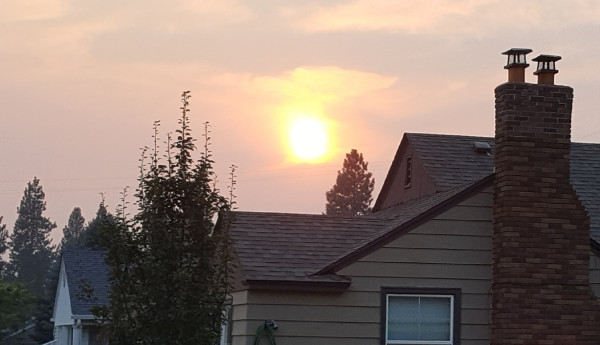 This is from a few evenings ago, but basically the same effect as this morning.  This is the 2nd house to our west.

Earlier this morning, around 8 am, there was so much smoke in the air the sun was just a big orange ball.  And now as one looks off in the distance, trees more than a couple blocks away look like they are in a light mist or haze.  Even more telling, as soon as one steps outside,  he or she can instantly smell smoke.  And they say it will be with us for a few days more.

Have been working fairly steadily on the third Stone Island Sea Story.  Finished Chapter Eight and have started on Chapter Nine.  If I stay on track, should have a good portion of "Nine" done by this time next week.  If I'm really "good," I should have it finished.

Finished reading Ed Des Autel's III Minutes To XII a few days ago.  Have a new read picked out which I  have barely started.  It's called The Spy Who Jumped Off The Screen by Thomas Caplan... with an introduction by President Clinton.  (I thought the intro was very well written... whatever one's opinion of Clinton as President, as a Statesman, as a politician, he is articulate and writes with a flow and grace of words not always seen today.)

Right now I'm in a time-killing mode... the Mariner's baseball game comes on in an hour or so and I'll watch that this afternoon.  Later, perhaps I'll end up back here on the computer... maybe another post, maybe a bit more on the WIP, or...  If it's reasonably cool this evening, and if the smoke isn't all that bad, maybe, repeat maybe, I'll do some of what I'd originally planned to be doing about now.
More Next Time.
Dave
Collapse