Probably a bit more than a week since I've posted any kind of book review here, so I'll play a bit of catch up.  This review is next in the files of Spokane Authors and Self-Publishers.  (You can also find it and other's on the organization's web-site.) 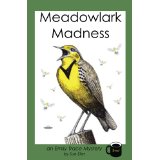 Reviewed by D. Andrew McChesney
Naturally one would assume that E. T. Investigations was formed to look into encounters with UFOs and aliens from beyond this world.  In fact, Emily Trace opened this detective agency to find out why her husband had been murdered.  To fund her personal investigation she takes on a client who, like us, mistakes the significance of the initials “E. T.”  Assigned to look into the apparent disappearance of the region’s meadowlarks, Emily and her friends are drawn into a bigger mystery, one that does involve aliens and other worlds.
This book is very hard to place into a specific genre.  It is a mystery, a science-fiction novel, perhaps a police procedural, and may even qualify as a “cozy.”  Regardless of where it fits, it is a most entertaining and enjoyable read.  Set in and around Spokane, Washington, and told as if by Emily herself, the pages turn at a rapid rate.  Uniquely, Emily sometimes stops to admonish the reader or to remind them of bits of popular culture from days gone by, which adds to the direct conversational tone of the story.
Meadowlark Madness is a very enjoyable book, created by a writer with a clever and unusual view of the world.  This reviewer looks forward to reading more of the Emily Trace Mysteries as they become available.
Meadowlark Madness: an Emily Trace Mystery, ISBN 9781479181711 is available in paperback at a number of Spokane area bookstores, as well as on Amazon in both paperback and Kindle™ formats.
Reviewed by Esther J. Hildahl
Emily Trace's husband, Jared, has been murdered, and the police can't figure out who did it, so Emily opens up her own detective agency to solve the crime herself. However, business is slow--no customers. Without customers she has no money to pay her bills and rent, and soon she'll be forced to close her office and move out. If only she had one paying client...
Then the office door opens and in walks a birdlike little character named Mr. Archibald Wren. He has a case for her to solve. A very strange case, for you see, he wants her to solve the mystery as to where all the world's meadowlark birds have disappeared to. And thus, the strange, sometimes out-of-this-world adventure begins.
Meadowlark Madness is Eller's first Emily Trace Mystery. It's well-written and her characters are well-defined, clever, and interesting. The story is fast-paced and exciting. I thoroughly enjoyed reading this book, and I recommend it to all who love a good mystery.
Available at local Spokane bookstores, as well as on Amazon, and Kindle.
Reviewed by Kate Poitevin
Ms. Eller has woven an interesting tale, full of quirky characters and surprising twists and turns. Her ability to break the forth wall at regular intervals gives us the feeling that Emily is sitting with us as she tells her story. She keeps it moving right along so that you don’t even want to stop to get a fresh cup of coffee. But, you must, because she has subliminally made you need one.
I have heard that there is a second book in the works and I will be first in line to get it. I must know if Emily will find Jared’s killer. In the meantime, I must put on a fresh pot of coffee and wait.
Reviewed by Beth Camp
This 5-star cozy mystery is sure to delight!
Just when overdue rent threatens to close the doors of Emily Trace’s E.T. Investigations, a new client arrives with an unusual concern (and a bundle of cash): The meadowlarks are missing!
Willing to accept nearly any commission to keep the doors of her private eye business open, recently widowed Emily Trace is determined to prove that her husband’s death was not accidental.
What ensues is a riotous and eventually overlapping series of events, engaging characters that come to life, and a plot that mixes a cozy mystery with science fiction flair. Within a very few sentences, I was hooked by Sue Eller’s witty and entertaining voice and imaginative storytelling. She brings to life the pleasures of living in a city with a small town heart, where people know each other and are willing to help when needed. Bird lovers and Star Trek fans will appreciate the allusions sprinkled throughout, and I thoroughly enjoyed Sue Eller’s ability to characters so fully that I felt I knew them – even Mr. Wren and Mr. Finch.
Reviewed by Joyce Caudel
Emily Trace opens her own detective agency after her husband is murdered. While she looks for clues a relative of her late husband turns up, a guy she didn’t know existed and is the spitting image of her late husband. Darla, an office temp, becomes a valuable part of E. T. Investigations.
Emily’s first client thinks aliens have abducted all the Meadowlarks, a species of bird. Deputy Clyde Burton seems intent on watching over Emily in the hunt for the Meadowlarks. Strange folks keep popping up in this story to make a fun and enjoyable read. If you’re a fan of mysteries and science fiction you will love Meadowlark Madness.

So a little over a month ago I posted about it being nearly a year since retiring, and how it seemed I was still trying to find a routine and get back to all those things I wanted to do upon no longer having to go to work everyday.   Primarily I haven't gotten into writing on a regular basis like I'd hoped to do.  A lot of folks are looking for the third Stone Island Sea Story and it just isn't motivating along like it should be.  I don't know if it is a case of writers block, or if it is because I manage to keep busy with other stuff.  I do two monthly newsletters and try to keep up two web-sites, and I deal a bit with trying to market the two books I have written and published, so I tell myself that I just don't get to the writing like I'd like.  But a lot of that is a bunch of crap... I end up spending two much time watching TV or on Social Media, or just plain surfing the web... The "Office!"  Messy enough, I suppose that I can claim to be at least a little creative.
As I wrote that last post about being retired for nearly a year, my thought was to consider the past year as an adjustment period and as I enter the second year of not working, to get back to work on the writing.  So I am once again writing, at least a little bit.  I've sat down with the material several times in the past week or so.... once just skimmed through the latest completed chapter and then into the current in-work chapter.  Actually added a couple pages to that a day or so later, and once after that added a few more lines.  Not a lot of productivity, but certainly more than I've done in quite a while.  I checked the data regarding the chapter currently in work and it seems I originated it nearly three years ago.  And I've noticed that as of late I'm thinking of the story... the next scenes, the continuation of the one currently being written, or scenes, conversations, events that will occur later on.  And I am having flashes of scenes and ideas for other stories farther down the line.  A good sign, I hope.  (I used to do a lot of this "dreaming" process at work, particularly while cleaning tennis courts in the early morning.  That was a task much like mowing a lawn, pushing the sweeper unit around and around, a job that didn't require a great deal of mental effort.  Therefore I could keep a small portion of my mind on the job and let the rest visualize upcoming scenes in the story.

I hope I will be able to keep this going and not experience a false start as I have in the more recent past.  Over the years I've had times where I seem to have gotten back on track, only to find myself de-railed again.  And while they say one should write everyday, my directive to myself is to do something with the story every time I'm on the computer.  Get the junk stuff out of the way, go into the files for the story and do something with it.

I'll let you know how it all works out.
Dave