As we move into August, the Inland Northwest is experiencing its annual heat wave.  Nice thing, though, is that it never lasts all that long.  We'll have three, four, or five days of really hot weather and then it'll cool off a bit for a few.  According to the weather guessers on TV, we got to 97 degrees F today and tomorrow they expect local highs to be in the 100s.  Saturday however it should be back into the lower eighties before starting a trend upwards again.

I don't mind it all that much... the house is airconditioned and most of the time it's not that bad.  But, the dining room and the front from, where I spend time to watch TV is on the west and south sides of the house.  That's where the hot afternoon sun beats down and they can get a bit warm.  Temp seems to go up in that location, even with the air cond running.  Would be nice to have a big shade tree in the front yard or perhaps in the neighbor's front yard.

As has happened the last few years, there are a number of fires burning in the region.  Therefore the skies are filled with smoke.  It isn't that bad, so far, I mean you can't really smell it.  But I can sense it and perhaps as I get older it seems to bother me more than it used to.  Anyway here's a picture I took a couple of evenings ago, not long before actual sunset.  You can see the brown tint of smoke in the sky.  A while later as the sun disappeared behind the trees and buildings, it was a red as can be.  I couldn't find a vantage point high enough to allow me a shot so I didn't get one.  And I've found that when photographed, the red doesn't show up in the pic like it is in real life. 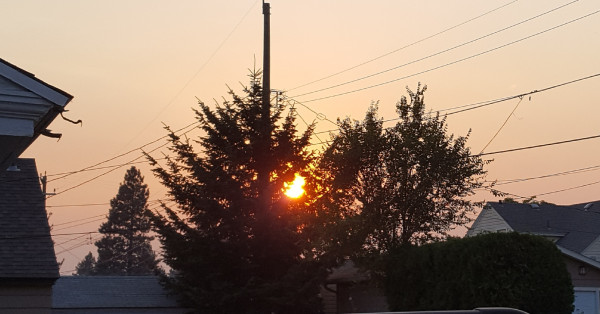 Sunday the Inland Northwest Corvair Club took a drive around Lake Coeur d'Alene in north Idaho.  It was a little cooler than today and we all had a nice trip.  Four Corvairs participated and I went along in my Nissan Frontier pick-up.  A lot of the road down the east side is a maze of corners, making it impossible to drive more than thirty-five miles per hour or so.  But it's exactly the kind of road the Corvair excells at and I found myself wishing I still had mine.  And there were times I wished for some sort of camera mount that I could operate with the push of a button... to grab a picture of the Corvairs ahead of me going around yet another turn.  Or if I would have had someone riding with me... or if I'd opted to ride with someone else.  Anyway, by the time I got back I determined that I'd driven around 180 miles for the day... including about forty miles to our starting point.  I ended up in a few areas I had not been in since I was a kid. 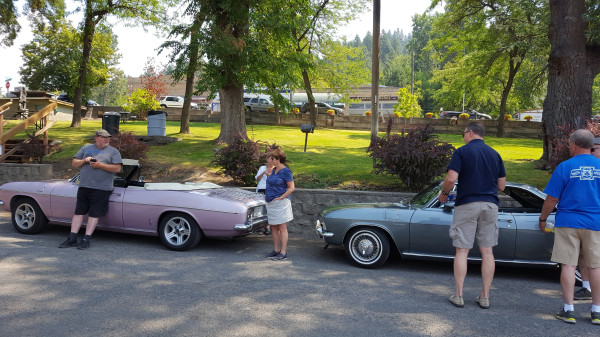 A couple of the Corvairs at the park in Harrison, Idaho. 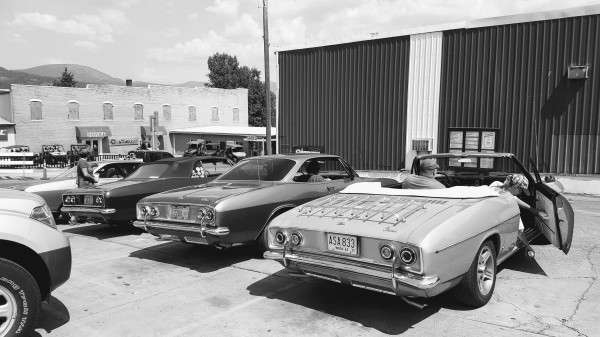 The four Corvairs in the parking lot at the little diner in St. Maries, Idaho, where we stopped for lunch.  All were "late" models, that is, 1965 through 1969 vintage.  Two sports coupes and two convertibles.  No sports sedans, no early (1960 -1964) models of anykind, and no forward control vehicles (Greenbriers, Corvans, Rampsides or Loadsides) participated.  Photo system on my phone converted this pic to black and white automatically.
After reading The Master Butchers Singing Club I read How to Write Science Fiction and Fantasy by Orson Scott Card.  It is a relatively short work and has some good information and advice in it.  I did think he was a bit disrespectful and dismissive of the Star Trek concept of Warp Speed and Warp Factor.  And when he talked getting published, it seems his advice about agents and publishing contracts was backwards from what I've learned over the years.  But then the book was written in the late 1980s and published in 1990.  Quite possibly the publishing world has changed since then.  One of these days I'll write a proper review and get it posted here.  Now I'm reading something called III Minutes To XII: The Last Secrets of The Bible.  It's by Ed Des Autel, a member of Spokane Authors and Self-Publishers, and I'd classify it as an "Ancient Aliens" type of work.  I like to think I have an open mind and I've always found things like this to be interesting... and in a way that sort of thing plays into the Stone Island Sea Stories, or at least into some of what I have planned for future works.  If I have one complaint about the book I'm now reading, it is that he could have done a bit more editing... cleaned it up a bit, and eliminated a lot of the duplication.  Still I find the basic concept of what he is trying to convey to be interesting and perhaps enlightening.

About time to wrap this up.  Have to go move the sprinkler in a few minutes, and later I want to watch and episode of NOVA on PBS.
Dave
Collapse