Jerry’s opinion as well as the accounts from the other men and women retired from the United States Military differed somewhat in that some had negative reactions about their tenures in the service, others positive. In general, however, all admitted to still being very patriotic.

The title is great, and the information he and his peers shared in this book is invaluable to non-service people, including our future citizens.

I’m a collector of personal history, and enjoyed the book very much. 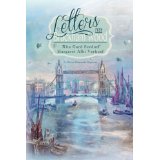 Here is the rarely told tale of the lives of those who are left behind when the men go off to war. It is written in the rarer still style of letters sent by cousins, one in England and the other in Spokane, WA.
It gives the viewpoint of the two women as they go about their lives with the specter of war hanging over them. There is a mystery that may or may not involve spies (no spoilers from me!) and in the background touches on the day to day life of air raids and rationing, with historical facts woven in to give time perspective.
I found it to be a delightful read.

This is a compelling book written in an unusual way.  Other than a brief introduction in which an individual is handed a container of letters to sort through, the bulk of the story is told via those letters.  In pre-World War II England, Moira Edwards takes a chance to write to her cousin Margaret, now living in the Northwest United States.  The letter reaches Margaret’s parents living in Chicago and her mother forwards it on to her.  Thus the cousins establish a correspondence which lasts nearly to the end of the war.
As they exchange letters, the cousins inform each other of the conditions each are living under, and at times compare cultural difference between England and the United States.  “I just read that in America the Post Office delivers the mail while here in England the Royal Mail delivers the post.”
As the story goes on, it seems that something isn’t right with the couple that Moira works for as a “maid of all work,” or “helper to the woman of the house.”  There are hints of espionage and other activities that may impact on the war effort.  Meanwhile cousin Margaret Walker is one of Spokane, Washington’s pioneering female physicians.  As war looms, and as America is finally drawn into the conflict, she finds herself helping both refugee Jews and displaced Japanese Americans.
It is the ability of the cousins to confide in each other which moves the story forward.  Only in the end does the narrator reappear to tidy up loose ends.  The authentic feel of the letters was achieved in part by each of the authors writing as one of the two cousins.  They in effect exchanged and answered letters just as the cousins did.
The story also serves to illustrate just how much things have changed since World War II.  Prices and wages mentioned seem minuscule compared to today’s standards.  Communication was primitive in light of the internet, web, most often done by mail or post.  The story also touches on civil rights, women’s rights, and the changes in society over the years.
This was an interesting and intriguing read, one that was hard to put down, and one this reader anxiously awaited to pick up again.  As a result this reader looks forward to the next book by these talented co-authors: Letters from a Wary Watcher: A Moira Edwards Walker Mystery.
Collapse