Reviewed by Esther J. Hildahl
Jody has lost a tooth and she wants to talk to the Tooth Fairy.  Her wish comes true when the Tooth Fairy appears and invites Jody to fly with her to Tooth Fairy Land.  Here the Tooth Fairy, Wee Fairies, and Wee Elves live. Jody, wearing her magic tooth necklace, has an exciting time exploring Tooth Fairy Land and discovering where teeth go and what they are used for after the Tooth Fairy takes them.
I thoroughly enjoyed reading this charming children's book.  It's creative, well-written with interesting characters, and has a surprise ending.  An excellent story to read aloud to young children.  Plus, the illustrations are great.  They, too, are creative, well-drawn, colorful, and fun to look at.
I recommend this book to anyone who has ever lost a tooth! 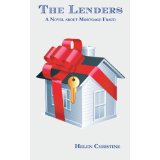 Reviewed by Robert G. Hildahl
This book is about the housing market just before its fall around 2007-2008. Bad home loans, which involved changing figures to qualify buyers for homes they couldn't afford, led to this disaster.
The story begins with the murder of Justin Diamond, an accountant at Franklin Mortgage. Justin's friend, Annie Robinson, one of the only honest loan processors at the company, and his wife, Stephanie, set out to solve his murder. Along the way, they find out that Stephanie's neighbor witnessed the murder but can't go to the police for reasons of his own. They discover fraud, greed, dishonesty, and other schemes to become rich. After they discover who killed Justin, Annie's child is kidnapped!
The Lenders is another great book by Helen Christine. It's very well written and is an exciting page turner. I really enjoyed reading it, and I recommend it to anyone who enjoys a good mystery.
Reviewed by Kate Poitevin
In The Lenders, Ms. Christine tells the other side of the story we only saw in the headlines and evening news. They were all about the big boys, the ones that stole millions. Her story might be a murder mystery, but the background tells the tale of how greed in the lending business caused countless people to lose their life savings and homes. Ms. Christine paints a believable picture of the fraud that took place with strong, interesting characters, including the city of Seattle which is very recognizable. The story pulls you right along and has a satisfying ending. It is written with short chapters that make it great to grab and read while waiting in the car or at bedtime.
Reviewed by Esther J. Hildahl
The Lenders is about mortgage fraud, the housing crash of 2008, and why it happened. It's about extreme greed and not caring whether buyers could really afford their home mortgages or not. Subprime home loans became the norm and were given to buyers with poor credit ratings and/or not earning enough money to make monthly payments on their newly acquired grossly overpriced homes. These poor risk loans were packaged and sold to secondary investors and then sold over and over again all over the world. When the housing market crashed, many buyers couldn't make their payments. They soon discovered they had no idea who actually held their loans, and thousands of buyers ended up losing their homes.
This story takes place in Seattle, Washington, where Annie Robinson is a loan processor for Franklin Mortgage. She is suspicious of some of the other loan processors and their dealings with prospective buyers.  One day her friend, Justin Diamond, an accountant at Franklin Mortgage, is murdered. Annie wonders if he knew something incriminating about mortgage fraud at Franklin Mortgage. Justin's wife, Stephanie, befriends Annie and together they set out to try to solve Justin's murder.
Helen Christine is a very talented writer. She did a great job writing about mortgage fraud in a way that all could understand what went wrong in 2008. I thoroughly enjoy reading her books. I recommend this book to anyone who enjoys reading mystery books and/or wants to learn about the housing crash of 2008.
Collapse